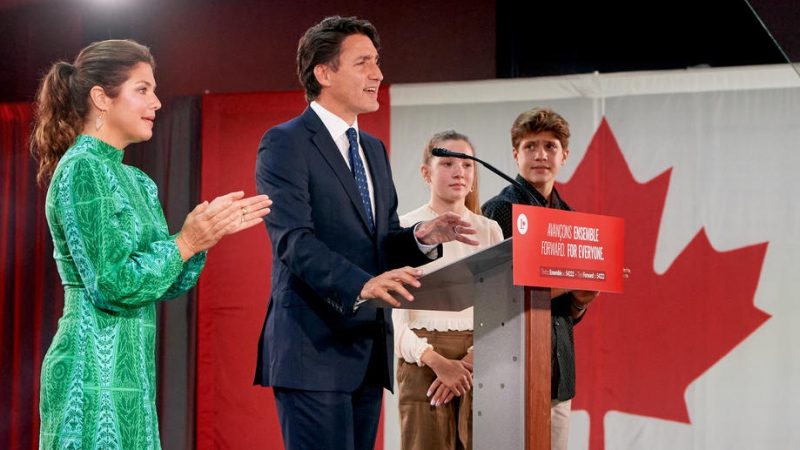 Justin Trudeau’s snap election gamble has landed the Canadian leader back at square one: reelected without a majority, the liberal prime minister will once more need backing from opposition rivals to govern.

His Liberals were leading or elected in 158 out of 338 electoral districts, according to official projections Tuesday morning (21 September).

The Conservatives, with 119 seats, will return to Ottawa as official opposition, while Trudeau will need to try to secure support from smaller factions — the separatist Bloc Quebecois (with 34 seats) or the leftist New Democrats (25) — to pass his agenda.

Before going back to work, Trudeau gladhanded commuters at a subway station in his Montreal electoral district of Papineau. “It is I who thank you,” he told supporters, snapping selfies with a few.

“I am very happy with the way he managed the pandemic” and “am happy to know that it is he who will get us out of it,” said Giugetta Iovino.

Others reminded him of their high expectations. “I’m counting on you to act for the environment!” called out a young woman.

In a victory speech late Monday, Trudeau said he heard loud and clear: “You just want to get back to the things you love and not worry about this pandemic, or about an election.”

He acknowledged that Canadians voted for “your members of Parliament of all stripes (to) have your back in this crisis, and beyond.”

At the same time, the prime minister leaned on Canadians to embrace bold new measures, saying: “The moment we face demands real important change and you have given this parliament and this government clear direction.”

European Council President Charles Michel was among the first offer congratulations to Trudeau, tweeting: “In these times we need solid friendships to promote multilateral solutions, and build on our strong cooperation and shared values.”

In these times we need solid friendships to promote multilateral solutions, and build on our strong cooperation and shared values. pic.twitter.com/PhElS19yQz

Trudeau started his campaign high in the polls, hoping to parlay a smooth Covid-19 vaccine rollout into a mandate to steer Canada’s pandemic exit.

But in the end the Liberals’ seat count remained virtually unchanged, with only three more than in the last parliament.

“It was clearly a failure,” said Andre Lamoureux, a politics professor at the University of Quebec in Montreal.

The difference from the last parliament “is absolutely minimal. It’s like taking the same photo from a slightly different angle,” he said, adding that Trudeau may now face challenges to his leadership of the party.

“He has failed to bring home a majority government after achieving one (in 2015). And two elections in a row (2019 and 2021), he’s lost the popular vote,” commented Elliot Tepper of Carleton University in Ottawa.

To prop up his minority government, Trudeau is most likely to tap the New Democrats, with whom the Liberals are ideologically aligned.

“When we support one another, when we lift each other up, we all rise,” its leader Jagmeet Singh said.

The Bloc may also be counted on to back certain legislation, its leader Yves-Francois Blanchette said.

Conservative leader Erin O’Toole, meanwhile, used his concession speech to once again blast Trudeau for calling the snap election in the middle of the pandemic, saying the election “only made worse” divisions exposed by the public health crisis.

The rookie leader, elected as head of the Conservatives only last year, vowed to stay on and ready his party for another election fight likely to come, he said, within two years.

The Tories actually won more votes Monday than the Liberals, but Liberal support was more concentrated allowing it to pick up more seats.

O’Toole’s predecessor was forced out after a similar result in the 2019 election, and O’Toole is already facing pushback from his rank and file for tracking the party to the center.

Tepper suggested this election marked “the beginning of a realigning” of the political landscape.

The Greens held onto to two seats, but despite climate change being top of mind for voters the party saw a steep drop in support from the last ballot, and leader Annamie Paul was shut out in her bid for a seat.

“The People’s Party,” said Tepper, “represents a populist movement that Canada has not seen, but is very familiar in the United States and across Europe.”

“It’s expanded its beachhead in Canada,” he said, and the Conservatives’ move to the centre “clears a lot of space on the right of the (political) spectrum in Canada for that party to grow.”