The Trump administration on Monday (10 September) threatened tough action against the International Criminal Court should it try to prosecute Americans for alleged war crimes in Afghanistan and said the PLO’s office in Washington would be closed for seeking to punish Israel through the court.

“The United States will use any means necessary to protect our citizens and those of our allies from unjust prosecution by this illegitimate court,” national security adviser John Bolton told the Federalist Society, a conservative group, in his first major address since joining President Donald Trump’s White House in April.

NEW: White House national security adviser John Bolton threatens U.S. sanctions against the International Criminal Court: "No committee of foreign nations will tell us how to govern ourselves" https://t.co/AfEIFrfeM5 pic.twitter.com/pxHtKVfLXj

The US response could include sanctions against ICC judges should such prosecutions proceed, Bolton warned.

Today John Bolton essentially open the door for the U.S. to commit war crimes without being held accountable when he labeled the International Criminal Court as "illegitimate" and threatened them with sanctions.

How can anyone be OK with this?

He added that the Palestine Liberation Organization’s office in Washington was being ordered closed out of concern about Palestinian attempts to prompt an ICC investigation of Israel.

In closing the PLO's Washington office, John Bolton cited the Palestinians' use of the International Criminal Court on issues like Israeli settlements in the West Bank. https://t.co/Mistq0OLxF

Bolton said he did not believe the closure of the PLO office in Washington would shut the door on a long-delayed Arab-Israeli peace plan that Trump senior adviser and son-in-law Jared Kushner has been developing for months.

He said the plan continued to be refined with an eye toward eventually proposing it.

The Palestinians said they were undeterred from going to the ICC. They deemed the planned PLO mission closure a new pressure tactic by a Trump administration that has slashed funding to a UN agency for Palestinian refugees and to hospitals in East Jerusalem, which Palestinians want as capital of a future state.

“We reiterate that the rights of the Palestinian people are not for sale, that we will not succumb to US threats and bullying,” Palestinian official Saeb Erekat said in a statement.

“Accordingly, we continue to call upon the International Criminal Court to open its immediate investigation into Israeli crimes.”

Israel welcomed the Trump administration’s move and accused the Palestinians of seeing the court as a way of sidestepping US-sponsored bilateral talks. Those contacts stalled in 2014.

‘Will not cooperate with ICC’

Bolton said the Trump administration “will fight back” if the ICC proceeds with opening an investigation into alleged war crimes committed by US service members and intelligence professionals during the war in Afghanistan.

“The ICC prosecutor has requested to investigate these Americans for alleged detainee abuse, and perhaps more – an utterly unfounded, unjustifiable investigation,” he said.

If such an inquiry goes ahead, the Trump administration will consider banning judges and prosecutors from entering the United States, put sanctions on any funds they have in the US financial system and prosecute them in American courts, Bolton said.

"This is pretty remarkable – to go after members of an international organisation for doing their job." @oonahathaway on John Bolton's threats to the ICC – which is investigating alleged American war crimes in Afghanistan. https://t.co/qKes9thTD2 pic.twitter.com/TmjGj96fy0

In addition, the United States may negotiate more binding, bilateral agreements to prohibit nations from surrendering Americans to The Hague-based court, Bolton said.

The court’s aim is to bring to justice the perpetrators of war crimes, crimes against humanity and genocide.

The United States did not ratify the Rome treaty that established the ICC in 2002, with Republican President George W. Bush opposed to the court. Bush’s Democratic successor, Barack Obama, took some steps to cooperate with it.

Palestinians have reacted with dismay to the US funding cuts, warning that they could lead to more poverty and anger – among factors stoking their decades of conflict with Israel. 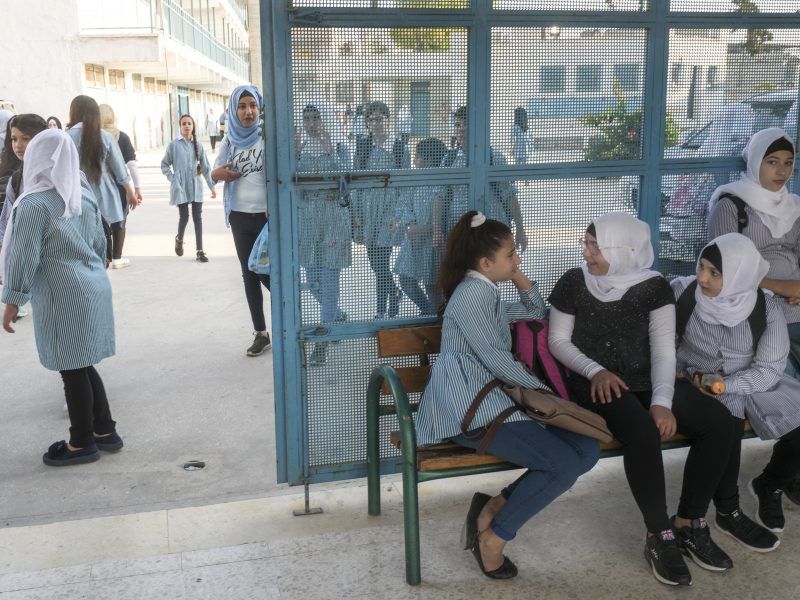 Trump ordered last week that $25 million earmarked for the care of Palestinians in East Jerusalem be directed elsewhere.

“This decision will create serious cash-flow problems at the hospitals and will necessarily create delays in life-saving and other urgent treatments,” Walid Nammour, head of the network of six hospitals affected, told reporters on Monday. “Overall, the decision puts the health of 5 million Palestinians at risk.”