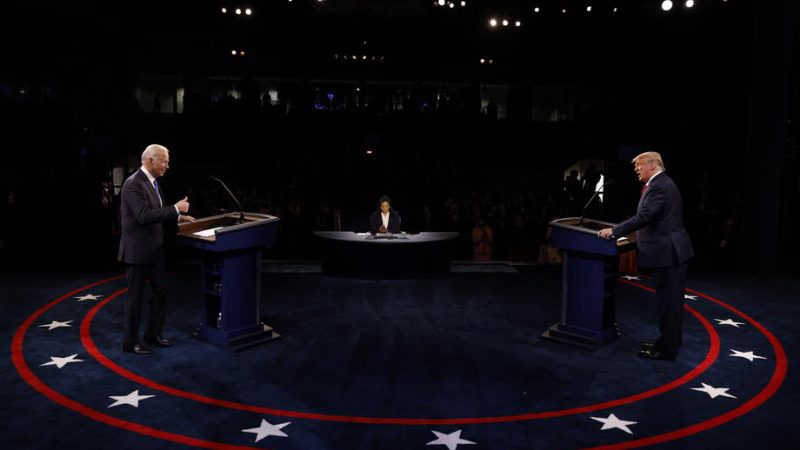 Republican President Donald Trump and Democrat contender Joe Biden faced-off in their final debate on Thursday (22 October), with less than two weeks to go before the US presidential election on 3 November.

To avoid a rerun of their first contentious debate, in which Trump repeatedly interrupted Biden, each candidate’s microphone was switched off while his opponent made a statement on a topic.

In the 24 hours before the debate, the director of national intelligence stated that Iran was behind an effort to send fake, intimidating-sounding emails to voters.

“I made it clear that any country that interferes in American elections will pay a price when I become president,” Biden said, stressing that Russia would not want him to win.

Trump sought to portray Biden as being corruptly involved with his son Hunter’s business dealings in Ukraine and China, which Biden repeatedly denied, but he struggled to shape accusations that have circulated in conservative media into a coherent case.

However, anyone who had hoped for “a smoking gun” or new revelations about Biden’s son was disappointed.

Biden said he never got “a penny” from abroad and pointed out that Trump has bank accounts in China and pays taxes there, compared to the little tax he pays in the US.

So far no evidence has emerged to link Biden to any improper behaviour, and the only result has been Trump’s impeachment last year by the House of Representatives for pressuring Ukrainian President Volodymyr Zelenskiy to investigate Biden.

Biden flatly denied any impropriety on his part, and contrasted his willingness to release his tax returns with Trump’s refusal to do so.

“What are you hiding?” he asked. “Release your tax returns, or stop talking about corruption.”

Trump has spent much of his campaign trying to attack the former vice president as “Beijing Biden,” but it hasn’t gained traction thus far.

“He embraces guys like the thugs like in North Korea and the Chinese president and [Russian President Vladimir] Putin and others, and he pokes his finger in the eye of all of our friends, all of our allies,” Biden said.

He promised countries like Russia, Iran or China “will pay a price for interfering in the US elections.”

Trump played up his détente with North Korean dictator Kim Jong Un, saying that “having a good relationship with leaders of other countries is a good thing.”

“That’s like saying we had a good relationship with Hitler before he, in fact, invaded Europe, the rest of Europe,” Biden rebuked.

“We will immediately get back into the Paris accord if I become president,” Biden promised, adding that he would prepare a major plan to shift the US from fossil fuels to renewable and green energy.

“I love the environment,” said Trump in response, repeating that he withdrew from the Paris agreement because it was unfair for the US economy.

“Biden is going to destroy the oil industry. You hear that in Texas, Pennsylvania, Oklahoma, Ohio?,” Trump said, pointing to the states with an oil industry and jobs. Pennsylvania and Ohio are swing states  where Trump wants to mobilize his supporters.

Four more years under this man would be really problematic,” Biden said, who has drawn up a subsidy program for environmentally-friendly energy.

Shortly after the last debate, Trump contracted COVID-19 and spent three days in hospital. The pandemic, which has killed more than 222,000 people in the United States, remains the top issue for voters and Biden has repeatedly accused Trump of mismanaging the crisis.

Trump appeared to make news by promising that a vaccine for the virus would be ready “within weeks,” before backpedalling.

He promised that the country was “rounding the corner,” even as several US states reported record one-day increases, for which Biden rebuked him that “anyone who’s responsible for that many deaths should not remain as president of United States of America.”

“If we just wore masks, we could save 100,000 lives,” Biden said, waving his face mask towards Trump.