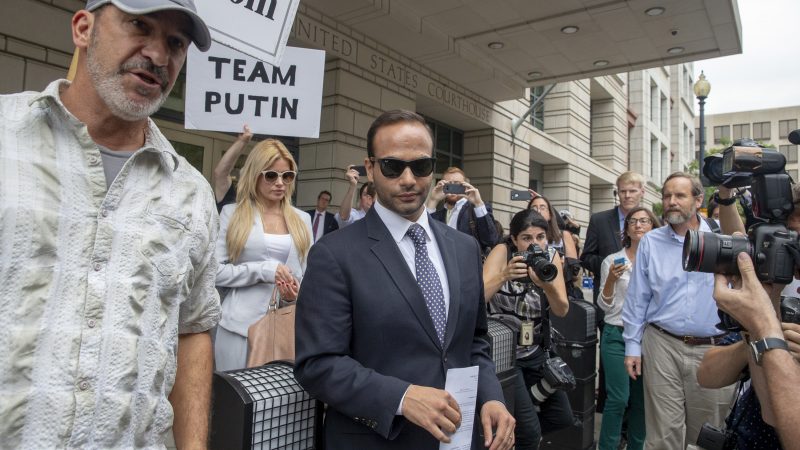 President Donald Trump granted a full pardon on Tuesday (22 December) to George Papadopoulos, a former campaign aide who pleaded guilty as part of the investigation into Russian meddling in the 2016 presidential election.

Trump also pardoned Alex van der Zwaan, 36, the Dutch son-in-law of Russian billionaire German Khan. Van der Zwaan was sentenced to 30 days in prison and fined $20,000 for lying to US Special Counsel Robert Mueller’s investigators about contacts with an official in Trump’s 2016 campaign.

Their names were included in a wave of pre-Christmas pardons announced by the White House. Trump granted full pardons to 15 people and commuted all or part of the sentences of five others.

The list of pardons and commutations included three former Republican lawmakers. Also pardoned were former US service members – Nicholas Slatten, Paul Slough, Evan Liberty and Dustin Heard – who were convicted of killing Iraqi civilians while working as contractors in 2007.

Papadopoulos, 33, was an adviser to Trump’s 2016 campaign. He pleaded guilty in 2017 to lying to FBI agents about the timing and significance of his contacts with people who claimed to have ties to top Russian officials.

“The defendant’s crime was serious and caused damage to the government’s investigation into Russian interference in the 2016 presidential election,” a sentencing recommendation memo from then-US Special Counsel Robert Mueller had said.

He served 12 days of a 14-day sentence in federal prison, then was placed on a 12-month supervised release.

The White House said Papadopoulos was charged with “a process-related crime, one count of making false statements,” as part of the Mueller probe, which Trump had denounced as a witch hunt.

“Today’s pardon helps correct the wrong that Mueller’s team inflicted on so many people,” the White House said.

The pardons were part of a flurry of such actions expected by the outgoing Republican president before Democratic President-elect Joe Biden takes office on 20 January. Trump, who has refused to concede, has made unsubstantiated claims of widespread voting fraud and pursued a series of unsuccessful lawsuits to overturn the result.

Democratic Representative Adam Schiff, chairman of the House of Representatives Intelligence Committee, said Trump was abusing power by issuing the pardons, “to reward his friends and political allies, to protect those who lie to cover up him, to shelter those guilty of killing civilians, and to undermine an investigation that uncovered massive wrongdoing.”

Last month, Trump pardoned his former national security adviser Michael Flynn, who had twice pleaded guilty to lying to the FBI during the Russia investigation. The Flynn pardon drew condemnation from Democrats and other critics.

In July, Trump commuted the sentence of longtime friend and adviser Roger Stone, sparing him from prison after he was convicted of lying under oath to lawmakers investigating Russian interference in the 2016 election.

Collins, 70, had been the first sitting member of Congress to endorse Trump’s candidacy in 2016 and was a strong defender of the president. He won re-election in 2018 but resigned the next year.

“In 2019, Collins pled guilty to the charges of conspiring to commit securities fraud and making false statements to the FBI. Mr. Collins is currently serving his 26-month sentence,” the White House said.

Trump also issued a full pardon to former Republican Representative Duncan Hunter of California, 44, who pleaded guilty a year ago to a single count of conspiring to convert campaign funds to personal use, a felony carrying a maximum penalty of five years in prison.

The president commuted the remaining prison term of former Republican Representative Steve Stockman of Texas, 64, who was convicted in 2018 of misuse of charitable funds.

The White House said he had served more than two years of his 10-year sentence and would remain subject to a period of supervised release and an order requiring that he pay more than $1 million in restitution.

Trump also commuted the remaining term of the supervised release of Crystal Munoz, who was convicted of conspiracy to distribute marijuana.

Munoz spent years in a federal prison in Fort Worth, with Alice Johnson, who was granted clemency by Trump in 2018 in a case championed by reality TV star Kim Kardashian West.