Donald Trump hailed Britain’s vote to leave the EU as “fantastic” as he arrived in Scotland on Friday (24 May) on his first international trip since becoming the presumptive Republican presidential nominee.

“I think it’s a great thing. I think it’s a fantastic thing,” he told reporters after stepping off a helicopter with the word “Trump” emblazoned on its side at the golf resort he owns in south-west Scotland.

Two bagpipers in kilts played as Trump landed and staff at the newly-renovated resort cheered.

Trump said he saw a “real parallel” between the anti-EU vote and his own campaign at a press conference which was briefly interrupted by a protester hurling red golf balls with black and white swastikas on them at the tycoon.

“People want to take their country back, they want independence,” he said, adding: “I think you’re going to have this happen more and more.”

And he mocked President Barack Obama’s backing for Britain to stay in the EU. 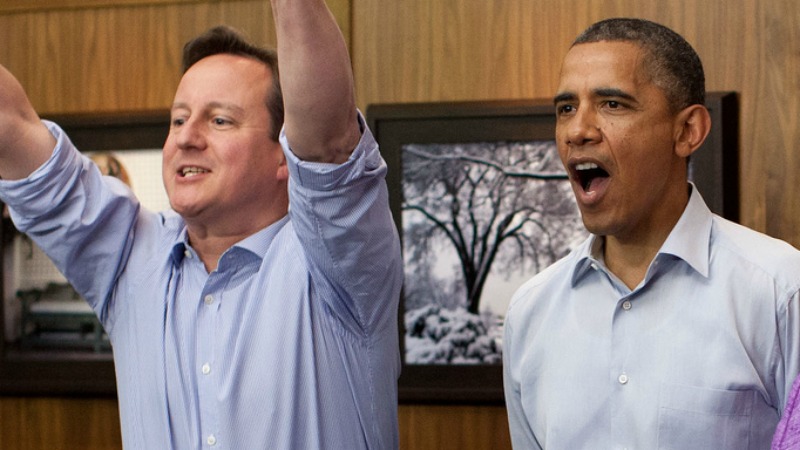 In London, Obama to wade into Brexit debate 'as a friend'

US President Barack Obama will put himself in an unusual, and risky, position next week in London: smack-dab in the middle of the heated British debate over whether to remain part of the European Union.

“I think his recommendation caused it to fail,” he quipped.

During a visit to London, Obama had warned Britain against leaving, saying it would find itself “at the back of the queue” for any bilateral trade deal.

At the resort, a large Scottish flag flew in front of the picturesque seafront, as protesters gathered nearby.

The visit is brief, just long enough to cut the ribbon following a refurbishment of his golf course, and he is due to return to the US on Saturday (25 June).

The New York celebrity tycoon has caused alarm in Europe with his abrasive style and pledges to deport millions of undocumented immigrants and build a wall on the border with Mexico.

His proposal to ban Muslims from entering the United States drew the ire of Britain’s Prime Minister David Cameron, who called the idea “stupid, divisive and wrong”.

British lawmakers yesterday (18 January) debated a petition to ban US Republican presidential candidate Donald Trump from Britain over remarks on Muslims, but while describing his comments as “crazy” and “offensive”, most said the ban would go against free speech.

His main rival for the presidential vote in November, Hillary Clinton, seized the moment to post a video compilation of criticism from Cameron and others.

“People in Scotland are not thrilled about Trump coming to their country,” Clinton posted on Twitter. “We know the feeling.”

Two groups, Scotland Against Trump and Stand Up To Racism Scotland, bussed protesters to the golf resort to picket the property mogul.

“Scotland is a progressive, tolerant and multicultural country and we oppose the bigotry that Donald Trump represents,” Keir McKechnie of Stand Up To Racism Scotland told AFP.

“We want to tell the world that he’s not welcome here.”

Jonathon Shafi of Scotland Against Trump said he wanted the gathering to demonstrate unity with protesters in the United States that have disrupted Trump rallies.

“We want to send a message of solidarity to movements like Black Lives Matter that we are united in opposition,” Shafi told AFP.

On Saturday, Trump is expected to travel to the Trump International Golf Links, another course he owns in the north-eastern Scottish coastal village of Balmedie, a resort that has been controversial with locals.

Some irate neighbours living next to the course have raised Mexican flags in symbolic opposition to Trump.

The trip stands in stark contrast to the welcome Obama received on a visit to Germany in 2008, when he was the presumptive Democratic nominee.

At the time, he addressed a crowd of tens of thousands about his hopes of closer links to a unified Europe.

Trump has criticised the continent’s leaders as “weak” and accused them of taking inadequate measures to combat terrorism following the Islamist attacks on Brussels in March.

From Trump to Brexit: ripple effects of Brussels attack

As Brussels reels from an attack by Islamic State jihadists, analysts warn of a ripple effect that could further whip up populist sentiment on the continent and in the United States and push the British to vote to leave the EU.

4 responses to “Trump hails Brexit vote on visit to Scotland”