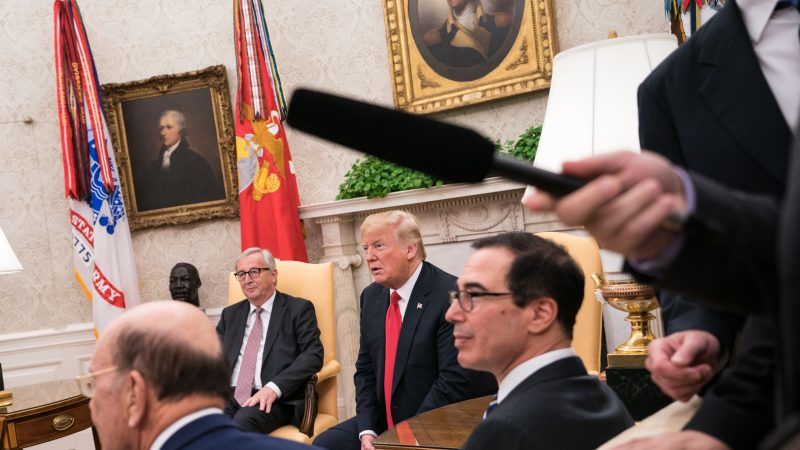 US President Donald Trump called EU Commission President Jean-Claude Juncker “nasty” on Tuesday (18 September) – but it was meant as a compliment.

“He’s tough, he’s nasty, the kind of guy I want negotiating for me,” Trump told reporters at the White House. “He’s a tough, tough cookie.”

Trump’s unusual assessment of Juncker — more real estate developer style than diplomatic — was then followed by an equally Trumpian boast regarding his own, even greater negotiating smarts.

Referring to US demands for renegotiated trade arrangements with the European Union, Trump said Juncker refused three times before a deal was struck in July.

“I said that’s OK. We don’t have to renegotiate any longer. We are going to put a tariff on all of the millions of cars you send into the United States,” Trump recalled with a satisfied smile.

According to Trump, Juncker “was in my office so quickly from Europe that I didn’t know they had airplanes that flew that fast. I said where did you find this plane?”

Trump, speaking alongside visiting Polish President Andrzej Duda, repeated his insistence that Washington is right to tear up longstanding trade agreements with close allies, as well as China.

“Our country has been abused, taken advantage of, by virtually every country that it does business with,” Trump said.

Last June Juncker disclosed that during the meeting of leaders of the Group of Seven major powers in Canada Trump called him “a brutal killer”.