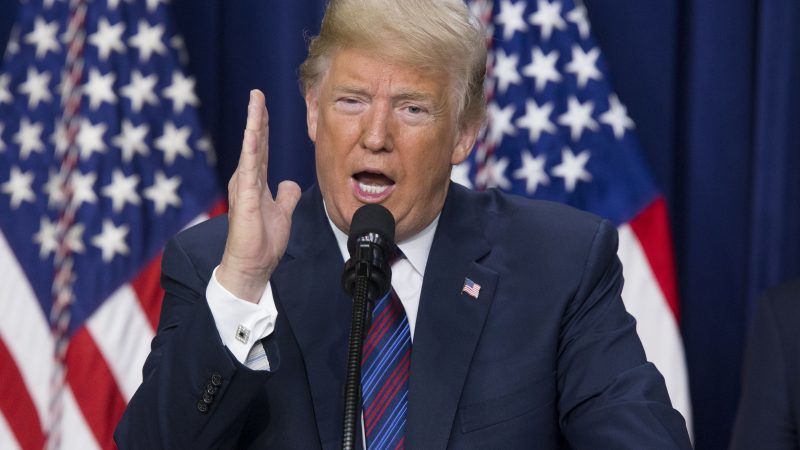 President Donald Trump has announced that the US would slap tariffs on steel and aluminium from EU, Canada and Mexico. [EPA-EFE/MICHAEL REYNOLDS]

“What the European Union is doing to us is incredible, how bad. They made $151 billion last year, our trade deficit with the European Union. They sound nice, but they’re rough,” he told a convention of Veterans of Foreign Wars.

"Just remember, what you are seeing and what you are reading is not what's happening" Trump says at the Veterans of Foreign Wars convention. pic.twitter.com/NWFsB8QV2g

Trump claimed that after threatening the EU with tariffs on Mercedes-Benz and BMW autos, they replied: “When can we, ah, show up? When can we be there? Would tomorrow be okay?”

In a tweet on Tuesday night, Trump said both the United States and the European Union should drop all tariffs, barriers and subsidies.

“That would finally be called Free Market and Fair Trade!” Trump said. “Hope they do it, we are ready – but they won’t!” he said.

The European Union is coming to Washington tomorrow to negotiate a deal on Trade. I have an idea for them. Both the U.S. and the E.U. drop all Tariffs, Barriers and Subsidies! That would finally be called Free Market and Fair Trade! Hope they do it, we are ready – but they won’t!

European Commission President Jean-Claude Juncker is scheduled to meet Trump Wednesday in Washington, a last-ditch effort to convince him to hold off imposing punitive tariffs on European auto exports to the US.

The Europeans say such levies would trigger a global economic earthquake and earn a withering riposte from Brussels.

In his speech to an appreciative audience in Kansas City, Trump was re-emphasizing a theme he had addressed earlier Tuesday on Twitter, when he boasted” “Tariffs are the greatest!”

“Either a country which has treated the United States unfairly on Trade negotiates a fair deal, or it gets hit with tariffs,” he tweeted, likening the US as a “‘piggy bank’ that’s being robbed” through trade imbalances.

The threatened car tariffs, which would deal a blow to Germany’s mighty automobile industry, come on top of high levies already slapped by Trump on aluminium and steel imports.

The European Commission has reacted with retaliatory tariffs, but new US levies on cars would prompt Europe to take further action.

Other US allies including Canada and Mexico have also hit back against the steel and aluminium tariffs.

“We have to think of ourselves,” Trump said in Kansas City.

“We gotta fight it,” he said, referring to “disaster” trade deals.

But the foreign minister of Germany, Europe’s biggest economy, said Tuesday that the continent “will not be threatened by President Trump. If we cede once, we will often have to deal with such behavior in the future,” Heiko Maas wrote on Twitter.

“No one has an interest in having punitive tariffs, because everyone loses in the end,” he said.