US President Donald J. Trump, arrives aboard Marine One on the South Lawn of the White House in Washington, DC, USA, 3 February 2019, after spending the weekend at Trump's Mar-a-Lago club in Florida. [Pool/EPA/EFE]

Trump said US military intervention was under consideration in an interview with CBS aired on Sunday.

“Certainly, it’s something that’s on the – it’s an option,” Trump said, adding that Maduro requested a meeting months ago.

“I’ve turned it down because we’re very far along in the process,” he said in a “Face the Nation” interview. “So, I think the process is playing out.”

The Trump administration last week issued crippling sanctions on Venezuelan state-owned oil firm PDVSA, a key source of revenue for the country, which is experiencing medicine shortages and malnutrition.

Maduro, who has overseen an economic collapse and the exodus of millions of Venezuelans, maintains the backing of Russia, China and Turkey, and the critical support of the military.

“The international community’s goal should be to help (Venezuela), without destructive meddling from beyond its borders,” Alexander Shchetinin, head of the Latin America department at Russia’s Foreign Ministry, told Interfax.

France and Austria said they would recognize Guaidó if Maduro did not respond to the European Union’s call for a free and fair presidential election by Sunday night. 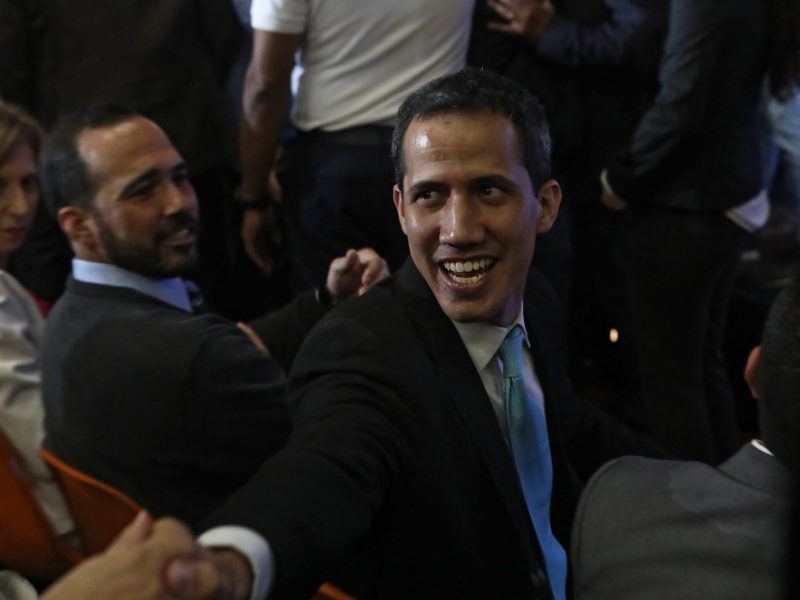 “We don’t accept ultimatums from anyone,” Maduro said in a defiant interview with Spanish television channel Antena 3 carried out last week and broadcast on Sunday.

“I refuse to call for elections now – there will be elections in 2024. We don’t care what Europe says.”

The 35-year-old Guaidó, head of the country’s National Assembly, has breathed new life into a previously fractured and weary opposition. Tens of thousands of people thronged the streets of various Venezuelan cities on Saturday to protest Maduro’s government.

Guaidó allies plan to take a large quantity of food and medicine donated by the United States, multilateral organizations and non-profit groups across the Colombian border into the Venezuelan state of Tachira this week, according to a person directly involved in the effort.

The group has not yet determined which border point it will cross, said the person, who asked not to be identified because he is not authorized to speak publicly about the issue.

It is unclear whether Maduro’s government, which denies the country is suffering a humanitarian crisis, will let any foreign aid through.

The embattled president on Sunday promised peace for Venezuela without specifically responding to Trump.

“In Venezuela, there will be peace, and we will guarantee this peace with the civil military union,” he told state television, in the company of khaki and black-clad soldiers who were earlier shown carrying guns and jumping from helicopters into the sea.

Maduro has overseen several such military drills since Guaidó declared himself president to display he has the backing of the military, and that Venezuela’s armed forces are ready to defend the country.

Air Force General Francisco Yanez disavowed Maduro in a video this weekend, calling on members of the military to defect. But there were no signs the armed forces were turning against Maduro.

Venezuela has as many as 2,000 generals, according to unofficial estimates, many of whom do not command troops and whose defection would not necessarily weaken the ruling socialists.

The police have also fallen in line with Maduro.

A special forces unit called FAES led home raids following unrest associated with opposition protests in January, killing as many as 10 people in a single operation in a hillside slum of Caracas.