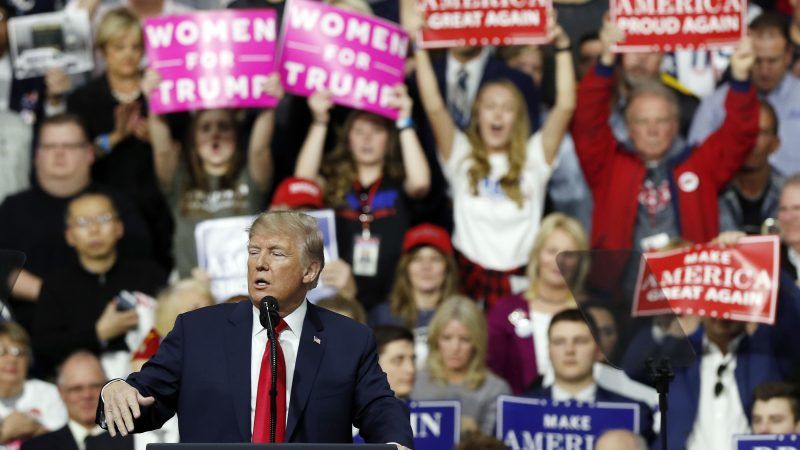 His threat, issued amid a roiling dispute over Trump’s announcement of tariffs on steel and aluminium imports from nearly every country, came in a campaign rally late Saturday (10 March) in Pennsylvania.

While it was not entirely clear whether the threat reflected actual US policy or merely an effort by the president to play to an appreciative crowd, he had used similar language earlier on Twitter.

“The European Union, wonderful countries who treat the US very badly on trade, are complaining about the tariffs on Steel & Aluminium,” Trump tweeted. “If they drop their horrific barriers & tariffs on US products going in, we will likewise drop ours. Big Deficit. If not, we Tax Cars etc. FAIR!”

The European Union, wonderful countries who treat the U.S. very badly on trade, are complaining about the tariffs on Steel & Aluminum. If they drop their horrific barriers & tariffs on U.S. products going in, we will likewise drop ours. Big Deficit. If not, we Tax Cars etc. FAIR!

The announcement of duties of 25% on imported steel and 10% on aluminium has stung the EU and other major partners, coming as a surprise to allied countries and even, reportedly, to some close presidential advisers. 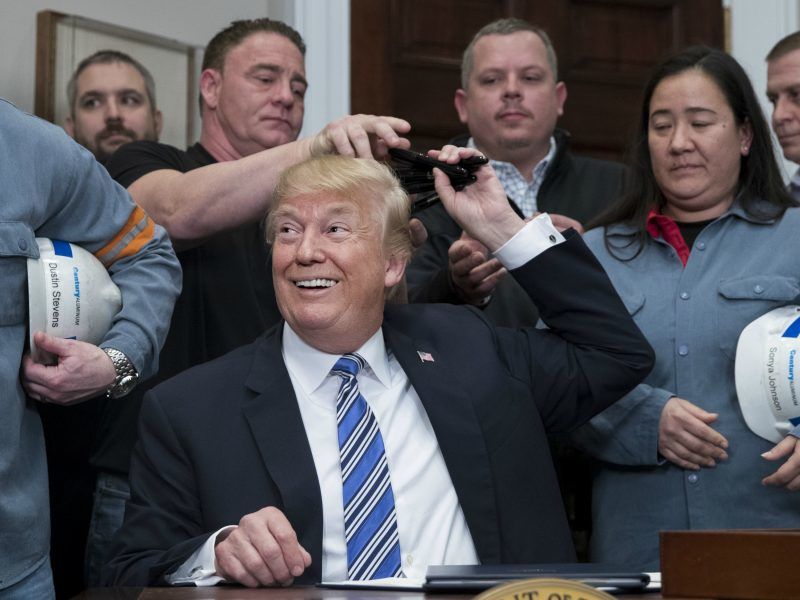 But the deputy White House spokesman, Raj Shah, said Sunday that no one should have been surprised.

Asked on ABC’s “This Week” whether Trump’s national security adviser, H.R. McMaster, was among those caught off guard, Shah demurred.

“I’m not going to get into specifics,” he said. “But it’s consistent with what the president said not just during the campaign, but for decades.”

Failing to include the national security adviser in talks on tariffs would seem highly unusual, given Trump’s argument that weakened US steel and aluminium industries would threaten national security.

In his speech Saturday in Pennsylvania – historically a major steel-producing state, but which has lost thousands of jobs to mechanization and foreign competition – Trump said that EU countries “kill us on trade.”

“We can’t even sell our farming goods in there, they totally restrict us. So then they say, ‘We want those tariffs taken off.’

Both German automakers sell thousands of vehicles yearly in the US, but they also have production facilities in the United States.

Bernhard Mattes, head of Germany’s VDA car association, told Handelsblatt business daily that policymakers must avoid a trade war at all costs, noting that BMW and other German automakers were also among the biggest US exporters in the sector.

“We have been building a global trading system for decades. European prosperity and millions of jobs depend on it – and Europe will not to stand idly by if someone puts the order of free world trade at risk,” Vestager added.

The president made his comments after crunch talks in Brussels between EU negotiators and US Trade Representative Robert Lighthizer aimed at defusing the row and avoiding an all-out trade war.

“As long-standing security partners of the United States, (the EU and Japan) underlined to ambassador Lighthizer their expectation that EU and Japanese exports to the US would be exempted from the application of higher tariffs,” an EU statement said after the talks.

But European Trade Commissioner Cecilia Malmström later tweeted: “No immediate clarity on the exact US procedure for exemption however, so discussions will continue next week.”

Brussels has pushed back hard against Washington’s shock measures, loudly announcing a list of US products it could hit with countermeasures.

Many traditionally pro-trade Republican lawmakers in the US fiercely oppose the tariffs, saying they might help steel and aluminium makers, but would mean higher prices on many other products.

“I think this is counterproductive,” Senator Ron Johnson, Republican of Wisconsin, said Sunday on CNN. It “could really result in retaliatory actions by our trade partners and it just injects uncertainty to an economy that was doing quite well.”

Warren, a longtime consumer-protection advocate and possible 2020 presidential candidate, was asked about the tariffs on CNN.

“I have to say, when President Trump says he’s putting tariffs on the table, I think tariffs are one part of reworking our trade policy overall,” she said. “We need a trade policy that’s comprehensive.”

Germany denounced moves by President Donald Trump to impose tariffs on US metal imports, saying Europe needed a united response to the threat and echoing criticism from China that it risked undermining the global trade system.

“Trump’s policies are putting the order of a free global economy at risk,” German Economy Minister Brigitte Zypries told Reuters on Sunday in an emailed statement.

“He does not want to understand its architecture, which is based on a rule-based system of open markets. Anyone, who is questioning this, is jeopardising prosperity, growth and employment.”

Hours earlier in Beijing, Chinese Commerce Minister Zhong Shan said any trade war with the United States would only bring disaster to the world economy.

Zypries added that Europe needed to avoid being divided by Trump’s offer to exempt some allies such as Mexico, Canada and Australia.

But the European Union and Japan on Saturday urged the United States to grant them exemptions, with Tokyo calling for “calm-headed behaviour”.