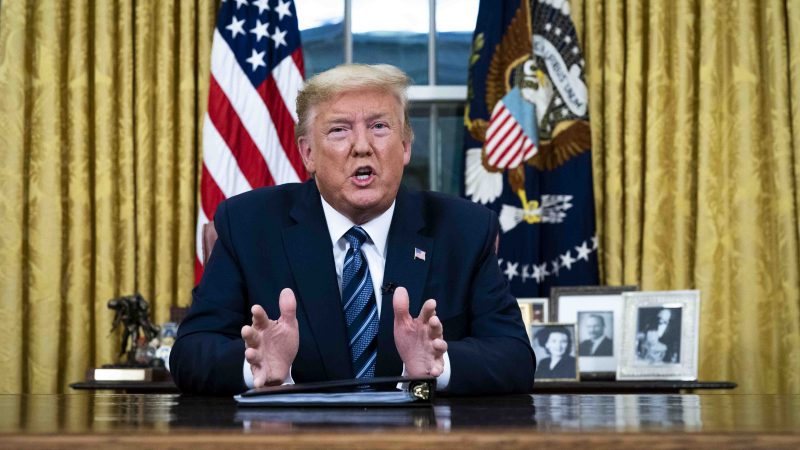 US President Donald J. Trump addresses the nation from the Oval Office about the widening coronavirus crisis, in Washington, DC, USA, 11 March 2020. [Pool/EPA/EFE]

The ban will not include travelers from the United Kingdom, which recently left the European Union, Trump said.

In a primetime address from the Oval Office to a worried nation, Trump sought to rebuff critics who say his leadership has been lacking during the crisis, insisting that “the virus will not have a chance.”

“This is the most aggressive and comprehensive effort to confront a foreign virus in modern history,” he said.

He announced a series of measures designed to ease the financial burden for people having to take weeks off from work while on quarantine.

But his most far-reaching announcement was the halt on European travel — and that suffered a moment of major confusion when he mistakenly appeared to say he was also stopping trans-Atlantic trade.

Trump said the travel ban would go into effect from “midnight Friday.”

He then said “these prohibitions will not only apply to the tremendous amount of trade and cargo, but various other things.”

The White House afterwards clarified that “the people transporting goods will not be admitted into the country, but the goods will be.”

And Ken Cuccinelli, acting deputy secretary at the Homeland Security Department, went on Twitter to reassure Americans that the ban on travel from Europe wouldn’t apply to “citizens or legal permanent residents or their families.”

The United States did not coordinate their travel ban with European officials, a European diplomat said.

“There was no heads up, no coordination as the president claimed,” the diplomat said.

In his address, Trump put a harsh accent on Europe’s role in the spread of the virus, which began in China and has now traveled around much of the world, bringing sometimes fatal flu-like symptoms.

“The European Union failed to take the same precautions and restrict travel from China and other hotspots” as the United States, Trump said.

“As a result a large number of new clusters in the United States were seeded by travelers from Europe.”

About 4,500 people have died so far worldwide. As of Wednesday, there were more than 1,100 confirmed infections in the United States and 32 deaths, according to a tally by Johns Hopkins University.

Numbers are expected to skyrocket in the United States once more testing is done.

Anthony Fauci, the director of the National Institute of Allergy and Infectious Diseases, said earlier Wednesday COVID-19 is estimated to be 10 times more deadly than flu and could infect that “many millions.”

“The bottom line: it’s going to get worse,” Fauci said.

He also said he was asking for another $50 billion in funding for small business loans to help those stricken by the economic disruption.

However, there was no declaration of a national emergency which would allow the government access instantly to extra funding.

Multiple cultural and sporting events have been cancelled across the United States, schools and universities are closing, and companies are scrambling to face the probability of sending many employees home on sick leave or self-quarantine.

Even the US presidential election faces disruption, with Democratic candidates Joe Biden and Bernie Sanders canceling rallies and questions mounting over the future of Trump’s own usually frequent rallies.

In his speech, Trump called on elderly people to avoid non-essential travel within the United States. Shortly after, the White House said Trump, 73, would be canceling a trip to Nevada and Colorado on Thursday out of “caution.”

For Trump, steadying market jitters is a must if he is to maintain his reelection message of delivering a booming economy.

At a White House meeting with US bank leaders, Trump said “we’ll be doing a lot of additional work with small businesses… many billions of dollars.”

Treasury Secretary Steven Mnuchin said earlier that the White House was “looking at providing substantial relief to certain taxpayers and small businesses who will be able to get extensions on their taxes.”

“We think we can provide over $200 billion of liquidity into the economy by delaying certain tax payments,” he said.

Democratic leaders are cool on the idea of tax cuts and made a competing proposal for compensating workers’ lost wages and sick leave, as well as providing loan forgiveness for individuals.

The Democratic proposal also called for disaster loans and grants for small businesses, emergency housing assistance, and loosened requirements for food assistance including continuing to serve meals to children even if schools are closed.

New York’s Democratic Mayor Bill de Blasio rebuked Trump for having nothing to say about remedying the low number of tests that had been carried out.

“Our ‘leader’ is more preoccupied with who to blame than how to protect people now that it’s in our communities,” he said in a statement.

EU Trade Commissioner Phil Hogan had been scheduled to give two speeches in Washington and meet in Ottawa with 12 other members of the World Trade Organization trying to work out plans to reform the Geneva-based trade body.

“The trip is canceled,” said a EU official.