Trump warns he could order the ‘official end of Iran’ 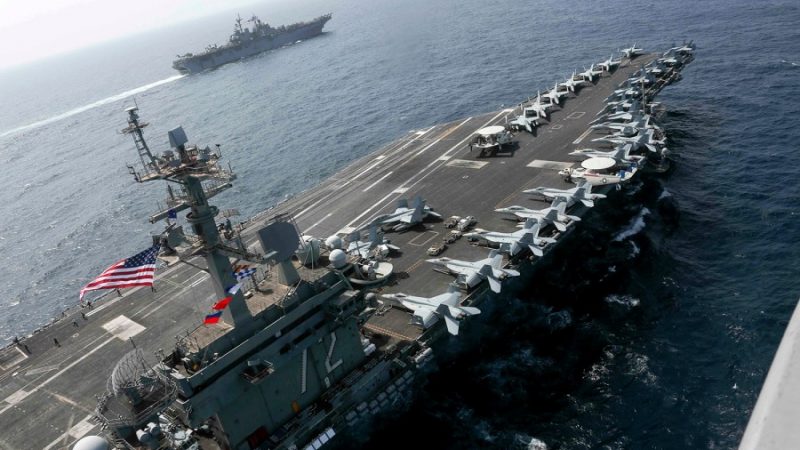 The USS Abraham Lincoln sails in the Arabian Sea near the amphibious assault ship USS Kearsarge on Friday, 17 May 2019. [US Navy]

US President Donald Trump issued a new threat to Tehran on Sunday (19 May), tweeting that a conflict would be the “official end” of Iran, as Saudi Arabia warned it stood ready to respond with “all strength” and said it was up to Iran to avoid war.

The heightened rhetoric follows last week’s attacks on Saudi oil assets and the firing of a rocket on Sunday into Baghdad’s heavily fortified “Green Zone” that exploded near the US embassy.

“If Iran wants to fight, that will be the official end of Iran. Never threaten the United States again!” Trump said in a tweet without elaborating.

If Iran wants to fight, that will be the official end of Iran. Never threaten the United States again!

A US State Department official said the rocket attack in Baghdad did not hit a US-inhabited facility and produced no casualties nor any significant damage. No claims of responsibility had been made, but the United States was taking the incident “very seriously.”

“We have made clear over the past two weeks and again underscore that attacks on US personnel and facilities will not be tolerated and will be responded to in a decisive manner,” the official said in an emailed statement. “We will hold Iran responsible if any such attacks are conducted by its proxy militia forces or elements of such forces, and will respond to Iran accordingly.”

Riyadh, which emphasized that it does not want a war, has accused Tehran of ordering Tuesday’s drone strikes on two oil pumping stations in the kingdom, claimed by Yemen’s Iran-aligned Houthi group. Two days earlier, four vessels, including two Saudi oil tankers, were sabotaged off the coast of the United Arab Emirates.

In response, countries of the Gulf Cooperation Council (GCC) began “enhanced security patrols” in the international waters of the Arabian Gulf area on Saturday, the US Navy’s Bahrain-based Fifth Fleet said on Sunday.

Iran has denied involvement in either incident, which come as Washington and the Islamic Republic spar over sanctions and the US military presence in the region, raising concerns about a potential US-Iran conflict.

“The kingdom of Saudi Arabia does not want a war in the region nor does it seek that,” Minister of State for Foreign Affairs Adel al-Jubeir told a news conference on Sunday.

“It will do what it can to prevent this war and at the same time it reaffirms that in the event the other side chooses war, the kingdom will respond with all force and determination, and it will defend itself and its interests.”

Saudi Arabia’s King Salman on Sunday invited Gulf and Arab leaders to convene emergency summits in Mecca on 30 May to discuss implications of the attacks.

“The current critical circumstances entail a unified Arab and Gulf stance toward the besetting challenges and risks,” the UAE foreign ministry said in a statement.

The US Navy’s Fifth Fleet said in its statement about increased maritime patrols that GCC countries were “specifically increasing communication and coordination with each other in support of regional naval cooperation and maritime security operations in the Arabian Gulf,” with navies and coast guards working with the US Navy.

The USS Abraham Lincoln Carrier Strike Group joined the USS Kearsarge Amphibious Ready Group and the embarked 22nd Marine Expeditionary Unit for a series of exercises during the past couple of days, according to a 5th Fleet statement Sunday. https://t.co/uTwF944H0M

Saudi Arabia’s Sunni Muslim ally the UAE has not blamed anyone for the tanker sabotage operation, pending an investigation. No-one has claimed responsibility, but two US government sources said last week that US officials believed Iran had encouraged the Houthi group or Iraq-based Shi’ite militias to carry it out.

The drone strike on oil pumping stations, which Riyadh said did not disrupt output or exports, was claimed by the Houthis, who have been battling a Saudi-led military coalition in a war in Yemen since 2015.

The Houthi-controled SABA news agency said on Sunday, citing a military source from the group, that targeting Aramco’s installations last week was the beginning of coming military operations against 300 vital military targets.

Targets include vital military headquarters and facilities in the United Arab Emirates, Saudi Arabia, as well as their bases in Yemen, the source told SABA.

The head of the Houthis’ Supreme Revolutionary Committee, Mohammed Ali al-Houthi, derided Riyadh’s call to convene Arab summits, saying in a Twitter post that they “only know how to support war and destruction”.

A Norwegian insurers’ report seen by Reuters said Iran’s Revolutionary Guards were “highly likely” to have facilitated the attack on vessels near the UAE’s Fujairah emirate, a main bunkering hub lying just outside the Strait of Hormuz.

Iranian Foreign Minister Mohammad Javad Zarif has dismissed the possibility of war erupting, saying Tehran did not want conflict and no country had the “illusion it can confront Iran”. This stance was echoed by the head of Iran’s elite Revolutionary Guards on Sunday.

“We are not pursuing war but we are also not afraid of war,” Major General Hossein Salami was cited as saying by the semi-official news agency Tasnim.

Washington has tightened economic sanctions against Iran, trying to cut Tehran’s oil exports to zero, and beefed up the US military presence in the Gulf in response to what it said were Iranian threats to United States troops and interests.

Crown Prince Mohammed bin Salman discussed regional developments, including efforts to strengthen security and stability, in a phone call with US Secretary of State Mike Pompeo, the Saudi Media Ministry tweeted on Sunday.

“We want peace and stability in the region but we will not sit on our hands in light of the continuing Iranian attack,” Jubeir said. “The ball is in Iran’s court and it is up to Iran to determine what its fate will be.”

He said the crew of an Iranian oil tanker that had been towed to Saudi Arabia early this month after a request for help due to engine trouble were still in the kingdom receiving the “necessary care”. The crew are 24 Iranians and two Bangladeshis.

Saudi Arabia and Shi’ite Iran are arch-adversaries in the Middle East, backing opposite sides in several regional wars. In a sign of the heightened tension, Exxon Mobil evacuated foreign staff from an oilfield in neighboring Iraq.

Bahrain on Saturday warned its citizens against travel to Iraq and Iran and asked those already there to return. The US Federal Aviation Administration has issued an advisory to US commercial airliners flying over the waters of the Gulf and the Gulf of Oman to exercise caution.