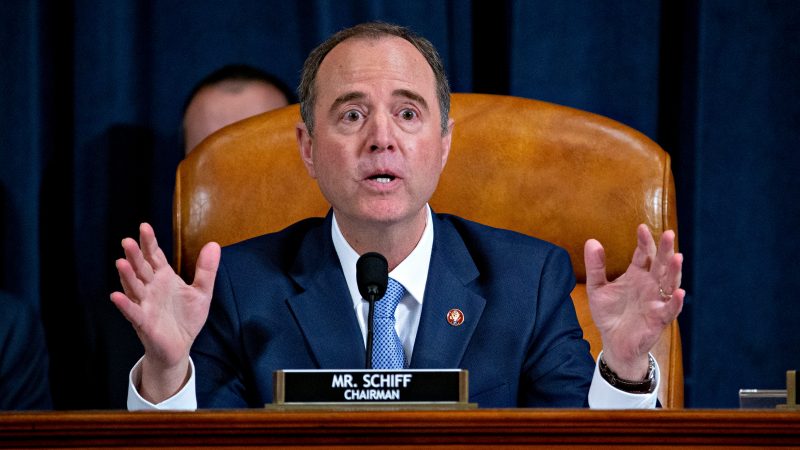 Representative Adam Schiff, a Democrat from California and chairman of the House Intelligence Committee, makes a closing statement during an impeachment inquiry hearing in Washington, DC, USA, 21 November 2019. [Pool/EPA/EFE]

Donald Trump’s conduct with Ukraine was far worse than the behavior that led to Richard Nixon’s downfall, the head of the congressional impeachment probe said Thursday (21 November) as he summed up the case for the US president’s removal.

Lawmakers investigating whether Trump abused his office by bullying Ukraine into assisting his reelection efforts have spent three days hearing the most explosive witness testimony since the scandal broke.

Democrats accuse Trump of demanding Ukraine’s assistance in a 25 July phone call and via a circle of accomplices, mainly senior figures in his administration.

He stalled almost $400 million in military aid and a White House visit for new Ukrainian president Volodymyr Zelenskiy, allegedly to coerce Kyiv — which is at war with Russia — into helping.

The plot would have worked, say Democrats, if not for a whistleblower whose complaint about the July call reached Congress on 9 September, ensuring the aid was handed over two days later.

Schiff spoke at the close of marathon testimony by nine witnesses over three days — on top of two days of hearings last week — that produced an avalanche of corroboration for the allegations against Trump.

Democrats are expected to prepare formal articles accusing Trump of abusing his presidential powers, bribery and obstruction of justice.

The investigation threatens to make him the third US president to be impeached, although the Republican-controlled Senate would need to convict him to remove him from office.

In bombshell testimony Wednesday, Washington’s envoy to the European Union testified that Trump tied the White House meeting to the investigation of Democratic 2020 frontrunner Joe Biden. 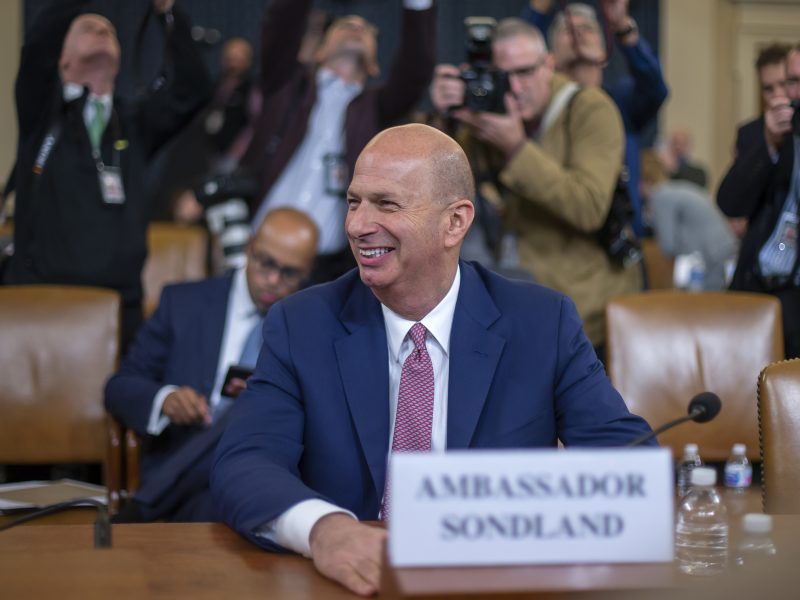 The ambassador to the EU Gordon Sondland directly implicated President Donald Trump Wednesday (20 November) in a scheme to force Ukraine to probe a political rival, in bombshell testimony to a televised impeachment hearing.

Ambassador Gordon Sondland told the panel Trump ordered him and other diplomats to answer to the president’s personal lawyer Rudy Giuliani, a private citizen with no public office, on Ukraine policy.

The former Soviet state, Democrats have noted, is not in the European Union.

Giuliani’s demands to Ukraine for investigations, Sondland said, “were a quid pro quo for arranging a White House visit for President Zelensky.”

On Thursday a former top White House Russia expert publicly rejected a Kremlin conspiracy theory pushed by Trump and his Republican allies that Ukraine helped the Democrats in the 2016 election.

The supposed plot, which Trump also asked Zelenskiy to investigate, was designed to stir havoc in US politics, said Fiona Hill, a senior official on Trump’s National Security Council until July.

“This is a fictional narrative that has been perpetrated and propagated by the Russian security services themselves,” she told lawmakers.

“These fictions are harmful even if they are deployed for purely domestic political purposes.”

Hill testified that she and other specialists involved in Ukraine policy were unnerved by the efforts of Trump, Giuliani and Sondland between March and September to pressure Ukraine.

Sondland, she told the House Intelligence Committee, “was involved in a domestic political errand” at odds with her team’s focus on US national security policy toward Ukraine.

“What we were trying to do was block him from straying into domestic politics,” she said.

“I said to him… I think this is all going to blow up. And here we are,” she told the panel.

Trump backers in Congress and the media have increasingly struggled to defend the president, mostly complaining about the process and impugning the motives of a roll call of nonpartisan witnesses rather than offering evidence to counter the accusations against him.

White House spokesman Hogan Gidley in a statement urged Democrats to drop the probe, while saying “President Trump wants to have a trial in the Senate because it’s clearly the only chamber where he can expect fairness and receive due process under the Constitution.”

But Schiff delivered a powerful argument at the conclusion of the hearings Thursday that Trump believed he was “beyond accountability.”

“And in my view there is nothing more dangerous than an unethical president who believes they are above the law,” Schiff said.