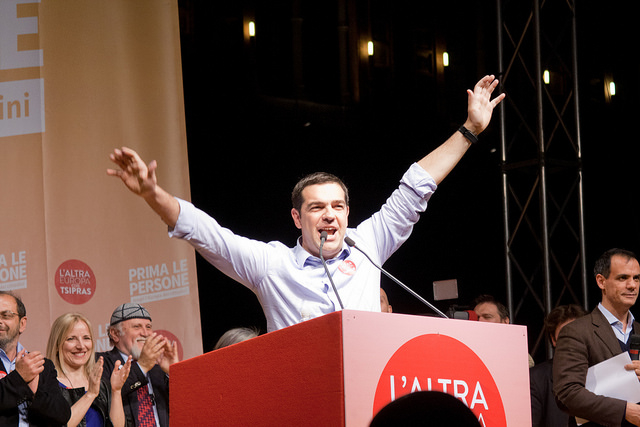 Greek Prime Minister Alexis Tsipras threw down an open challenge to international creditors on Wednesday by halting privatisation plans agreed to under the country’s bailout deal, prompting a third day of heavy losses on financial markets.

A swift series of announcements signlled the newly installed government would stand by its anti-austerity pledges, setting it on course for a clash with European partners, led by Germany, which has said it will not renegotiate the aid package needed to help Greece pay its debts.

Tsipras told the first meeting of his cabinet members that they could not afford to disappoint the voters who gave them a mandate in Sunday’s election, which his Syriza party won decisively.

After announcing a halt to the privatisation of the port of Piraeus on Tuesday, for which China’s Cosco Group and four other suitors had been shortlisted, the government said on Wednesday it would block the sale of a stake in the Public Power Corporation of Greece (PPC).

It also plans to reinstate public sector employees judged to have been laid off without proper justification and announced rises in pension payments for retired people on low incomes.

Uncertainty over the new government’s relations with the European Union went beyond economic policy. A day before the EU is expected to extend sanctions against Russia for six months, it was unclear if Athens would back its European partners on this move, after dissenting over a joint statement from the bloc on Ukraine on Tuesday.

Tsipras, who met Russia’s ambassador to Athens on Monday and the Chinese envoy the next day, told ministers that the government would not seek “a mutually destructive clash” with creditors. But he warned Greece would not back down from demanding a renegotiation of debt.

>>Read: Tsipras has first clash with EU – over Russia

“We are coming in to radically change the way that policies and administration are conducted in this country,” he said.

Financial markets have taken fright. Greek bank stocks plunged more than 22 percent on Wednesday, taking their cumulative losses since the election to 40 percent.

The overall Athens stock market fell almost 8 percent , while Greek five-year government bond yields hit around 13.5 percent. This marked their highest level since a 2012 restructuring which wrote off a large proportion of Greek debt held by private investors.

Newly-appointed Finance Minister Yanis Varoufakis, who meets Jeroen Dijsselbloem, head of the eurozone finance ministers’ group on Friday, said negotiations would not be easy, but he expected they would find common ground.

“There won’t be a duel between Greece and Europe,” he said, in his first meeting with reporters since taking office.

Varoufakis said he would meet the finance ministers of France and Italy – both countries which have pressed for a change of course in Europe from rigid budget orthodoxy – in the coming days.

France has ruled out straight cancellation of Greece’s debt, about 80 percent of which is held by other eurozone governments and multinational organisations such as the IMF. However, Paris has said it would be open to talks on making Greece’s debt burden more sustainable and Tsipras is expected to meet President Francois Hollande before an EU summit on 12 February.

The response from Germany was frosty. Economy Minister Sigmar Gabriel said Athens should have discussed the halt to privatisations with its partners before making an announcement.

“Citizens of other euro states have a right to see that the deals linked to their acts of solidarity are upheld,” he said, adding that it would be the “wrong solution” for Greece to quit the euro but that it was up to Athens to decide.

Fears that talks between the new government and its creditors would break down, with unforeseeable consequences for Greece’s future in Europe, fuelled the third successive day of f turmoil on the markets.

“The floor is zero if things go badly in the negotiations between the new government and the rest of the eurozone,” said Simon Maughan, head of research at OTAS Technologies.

Tsipras said the government would pursue balanced budgets but would not seek to build up “unrealistic surpluses” to service Greece’s massive public debt of more than 175 percent of gross domestic product.

Priorities would be helping the weakest sections of society, with policies to attack endemic cronyism and corruption in the economy, reduce waste and cut Greece’s record unemployment.

The new government also confirmed it would stop the planned sale of state assets, in line with its election pledges.

Shares in PPC, which is 51 percent owned by the state and controls almost all of Greece’s retail electricity market, were down nearly 13 percent, while Piraeus Port stock fell nearly 8 percent.

“We will halt immediately any privatisation of PPC,” Energy Minister Panagiotis Lafazanis told Greek television a few hours before officially taking over his portfolio. “There will be a new PPC which will help considerably the restoration of the country’s productive activities,” he said.

The previous government of conservative Prime Minister Antonis Samaras passed legislation last year to spin off part of PPC to liberalise the energy market under a privatisation plan agreed under the EU/IMF bailout.