“We are going through a difficult period in our relations with Turkey, which is why we have to continue to discuss,” Greek government spokesman Dimitris Tzanakopoulos told KritiTV.

“This visit can contribute to de-escalation of tensions.”

In December 2017, Erdoğan became the first Turkish president to visit Greece in 65 years. But he stunned his hosts when he asked for a revision of the 1923 Lausanne Treaty that defines the borders of modern Turkey after the collapse of Ottoman Empire. 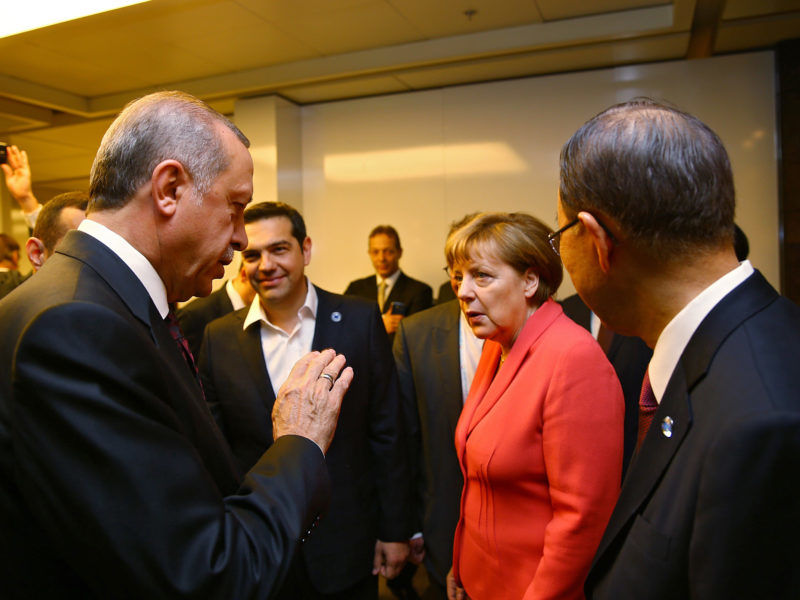 The European Union has made it clear that all candidate countries must respect international treaties, an EU official told EURACTIV.com in reference to the Turkish President Recep Tayyip Erdoğan, who said in Athens that a 1923 border deal between Turkey …

The Turkish leader also denounced “discrimination” of Greece’s Muslim minority in northern towns like Komotini, near the border, citing a chapter in the treaty about minority rights, which he said had not been “respected”.

“During my visit, I think we will have the opportunity to continue the difficult but frank dialogue that began in December 2017,” Tsipras said in an interview with the Turkish state-run news agency Anadolu ahead of the visit.

For Ozgur Unluhisarcikli at the German Marshall Fund of the United States think tank, “the positions (of the two countries) are too far away” to bring concrete results and the main objective would be to see “if there is any space for dialogue in the future”.

Tsipras’s visit comes a few days after the 23rd anniversary of a 1996 crisis that brought the two countries to the edge of a war over the sovereignty of rocky islets — called Kardak by Ankara and Imia by Athens.

The trip also comes 20 years after the beginning of a rapprochement in ties in 1999 when Greece rushed to Turkish help following a devastating earthquake that hit Istanbul.

“Even though these talks might not go anywhere, the essence is that there is a pretence of dialogue, and this is important,” according to Dimitrios Triantaphyllou, director of the Centre for International and European Studies at Kadir Has University in Istanbul.

“The concrete thing would be a picture of a smiling president and a smiling prime minister reinforcing their willingness to maintain good neighbourhood relations,” he said, adding that the visit was “long overdue.”

One of the main disputes is the issue of oil and gas exploration of Cyprus, which has been divided between the internationally-recognised Greek southern portion and the breakaway Turkish north for over four decades.

The discovery in recent years of gigantic gas fields in the eastern Mediterranean has whetted the appetite of Cyprus which dreams of eventually becoming a major energy player.

But Ankara says such exploration deprives Turkish Cypriots of the island’s offshore resources and calls for its suspension until a lasting solution is found to the Cyprus problem.

Erdoğan’s spokesman Ibrahim Kalin said Monday Turkey would not allow a “fait accompli” in the eastern Mediterranean and would instead defend “equal and fair” sharing of the resources.

“Greek Cypriot attempts to create a de facto situation is a futile effort. Turkey will not accept them,” he told journalists.

The two leaders are also expected to discuss a migrant deal which Ankara struck with the European Union in 2016 to stem the flow of refugees.

Under the deal Turkey has agreed to take back migrants landing on Greek islands in exchange for incentives including financial aid.

Tsipras told Anadolu that as a result of the deal, “illegal flows and especially deaths in the Aegean drastically decreased”.

Despite the agreement, hundreds of migrants continue to disembark every day on the Greek islands — about 5,000 people between September and December, putting heavy pressure on overcrowded Greek refugee camps.

The number of people crossing the land border between the two countries has also increased significantly, from 5,400 in 2017 to 14,000 in 2018, according to Greek Minister for Migration Policy Dimitris Vitsas.

Turkey also strongly criticises Athens for granting asylum to Turkish soldiers who fled the country after the 2016 failed coup.

After Ankara, Tsipras will go to Istanbul on Wednesday for a meeting with Greek Orthodox patriarch Bartholomew.