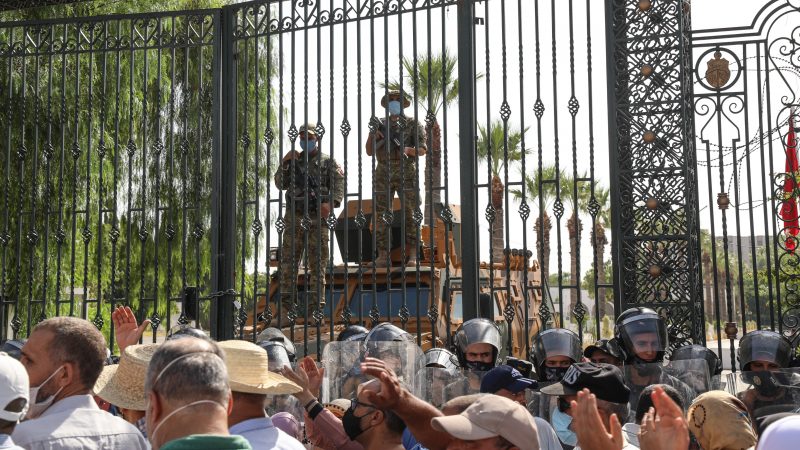 Tunisia’s democracy faces its ‘gravest’ threat in the decade since the Arab Spring, opposition and civil society leaders in the country have warned, while the president set out plans to rule by decree and amend the constitution.

Earlier this week, President Kais Saied’s office declared that he will rule by decree and ignore parts of the constitution as he prepares to change the political system, deepening a political crisis that flared during the summer.

Saied’s office announced that he would form a committee to draft amendments to the 2014 constitution and establish “a true democracy in which the people are truly sovereign“.

Meanwhile, the president will issue “legislative texts” by decree, appoint the cabinet and set its policy direction and basic decisions without interference. Other parts of the constitution will stay in force, but only those that do not conflict with the president’s rule by decree, his office said.

The European Commission has remained largely silent on the Tunisian political crisis, beyond calling for its democratic institutions to be respected. However, on Tuesday, the leaders of southern European Union countries backed a statement called for “preserving democracy, constitutional procedures and adherence to the law in Tunisia.”

The South EU summit in Athens was attended by the heads of states of Cyprus, Croatia, Spain, France, Greece, Italy, Malta, Portugal, and Slovenia.

Rached Ghannouchi,  president of the Ennahdha party and speaker of the Tunisian Parliament, told EURACTIV that the latest presidential move “confirms our position two months ago that the “exceptional measures” announced on 25 July constitute a coup against Tunisia’s democracy and constitution and a step towards absolute authoritarian rule devoid of any legitimacy.”

“We believe these unconstitutional measures exacerbate the country’s complex crises and prevent the country from focusing on its real and urgent problems, threatening the essence and unity of the Tunisian state and pushing the country towards instability and unprecedented dangers,” he added.

Ennahda, a moderate Islamist party that is still the largest caucus in Tunisia’s parliament, has seen its offices attacked by supporters of the president.

Elsewhere, a group of four Tunisian political parties – Attayar, Al Jouhmouri, Akef, and Ettakatol – said in a joint statement that “the president has lost his legitimacy by violating the constitution … and he will be responsible for all the possible repercussions of this dangerous step.”

The Tunisian parliament has been suspended since 25 July and will remain frozen with members’ right of immunity from prosecution still lifted.

Saied initially saw a spike in his personal ratings after suspending Parliament and sacking Prime Minister Hichem Mechichi. A succession of weak governments, a stagnant economy, and high unemployment, alongside corruption among political elites, have driven public support for his promise of strong leadership.

However, Saied’s critics say the president, who was elected last year, lacks government experience and is becoming dictatorial.