The arrest of Demirtaş and Yuksekdag, in Diyarbakir. [Yolculuk Gazette]

At least 11 other HDP parliamentarians were also detained, lawyers said, in a major escalation of the government’s crackdown on its opponents in the wake of the failed coup on 15 July. Raids also took place in the south-eastern cities of Van and Bingol.

A Turkish court has ordered the detention of the two mayors of Diyarbakir, the largest city in the predominantly Kurdish southeast of the country, accusing them of “terrorist” activities linked to the outlawed Kurdistan Workers’ Party (PKK).

HDP is the third largest party in the 550-seat Turkish parliament, with 59 seats. Parliamentarians in Turkey normally enjoy immunity from prosecution, but the pro-Kurdish party’s immunity was lifted earlier this year.

In its first opinion on Turkey after the failed coup d’état on 15 July 2016, the Council of Europe called today (17 October) on restoring the inviolability of members of parliament, which was infringed by an amendment of the constitution introduced last April.

Turkey accuses the HDP of links to the Kurdish militant group PKK, which is deemed a terrorist organisation by the United States, the European Union and Turkey.

A widespread difficulty in reaching social media websites such as Twitter and Facebook as well as messaging app WhatsApp was also reported across Turkey after the detentions started at midnight.

+ Rumor of imminent invasion of #Iraq.

Turkey has a tradition of blocking Twitter and other social media whenever internal tensions grow. 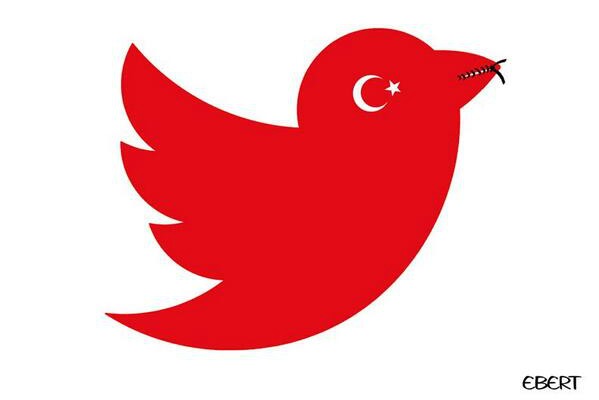 European leaders slammed the Turkish government for banning Twitter this morning (21 March). The ban is yet another incident hampering EU-Turkish accession talks, due to the ongoing crackdown on free speech by Ankara. EURACTIV Turkey contributed to this report.

Demirtaş – a charismatic leader dubbed the “Kurdish Obama” by some admirers – and Yuksekdag had been targeted by several separate probes over the last months but this is the first time that either has been detained.

The European Union is turning a blind eye to human rights violations in Turkey in a doomed bid for a solution to its migrant crisis, the leader of Turkey’s main Kurdish party told a Greek newspaper today (17 February).

Others detained included the prominent MP, Sirri Surreya Onder, who in the past has been a pointman for contacts with jailed PKK leader Abdullah Ocalan. The head of the HDP’s faction in the Turkish parliament, Idris Baluken, was also held.

Police also raided and searched the party’s head office in central Ankara. Television images showed party officials quarreling with police during the raid, and a Reuters witness said many police cars and armed vehicles had closed the entrances to the street of the HDP headquarters.

A group of protesters chanting slogans tried to reach the party offices, but were stopped by police before they could enter the street, a Reuters witness said.

HDP is the third largest party in the 550-seat Turkish parliament, with 59 seats. Parliamentarians in Turkey normally enjoy immunity from prosecution, but the pro-Kurdish party’s immunity was lifted earlier this year.

Turkey accuses the HDP of links to the Kurdish militant group PKK, which is deemed a terrorist organisation by the United States, the European Union and Turkey.

The raids come as Turkey remains under a state of emergency imposed in the wake of the coup, which critics say has gone well beyond targeting the actual coup plotters.

Thirteen staff from the opposition Cumhuriyet newspaper, including the editor-in-chief, were detained on Monday, further heightening strains in Turkish society.

Turkish police on Monday (31 October) detained the editor-in-chief of the newspaper Cumhuriyet — a thorn in the side of President Recep Tayyip Erdoğan — as Ankara widens a crackdown on opposition media.

Tensions have surged in the Kurdish-dominated southeast of Turkey since a fragile ceasefire declared by the PKK collapsed in 2015. The HDP seeks to promote the cause of Turkey’s Kurdish minority and defend the rights of Kurds as well as those of women, gays and workers.

But the authorities accuse the party of being a front for the PKK and failing to distance itself from terror, claims it has always vehemently denied.

Erdoğan has launched repeated personal attacks on Demirtaş, who analysts have seen as the sole politician in Turkey who comes anywhere near to rivalling his charisma.

Demirtaş has made it a personal crusade to oppose Erdoğan’s plan for a presidential system in Turkey, which the HDP says would lead to dictatorship.

Reportedly a massive blast has hit the police academy in Diyarbakir, a Turkish journalist announced in Twitter.