While Turkish-made drones have won battles in Libya, its soap operas and other cultural products have won hearts and minds in Maghreb countries, several of which were once part of the Ottoman Empire.

Muslim conservative President Recep Tayyip Erdoğan has in recent years asserted Ankara’s role as a regional player, sparring with Greece and the European Union as well as with Russia and Gulf nations.

His willingness to confront European former colonial powers, especially France, and present himself as a defender of the Muslim world has earned him the respect of many in North Africa and elsewhere, say observers.

“It really started in 2011 at the time of the Arab Spring” when popular revolts toppled the region’s autocrats and Turkey backed Islamic movements such as the Muslim Brotherhood, he said.

“In 2020 there was a sudden acceleration of Turkish influence, which is now direct with its intervention in Libya, putting Turkish soldiers and mercenaries on the borders of Algeria and Tunisia.”

Ankara-backed networks are promoting Turkey “through social media and the press,” Vermeren said.

Political analyst Ali Bakeer, based in Ankara, agreed that “Turkey is seeking to strengthen its relations with the countries of the Maghreb region as a part of its opening up on Africa strategy.

“Turkish-Algerian relations are emerging fast. Meanwhile mutual interests between Turkey and Libya are evolving day by day. When it comes to Tunisia and Morocco, Turkey is trying to focus on the mutual economic benefits.”

Turkey’s impact has been most dramatic in oil-rich Libya, which was thrown into chaos after a 2011 NATO-backed uprising toppled and led to the killing of long-time dictator Muamar Gadhafi.

Ankara’s help with military advisers, materiel and mercenaries — echoing its interventions and defence support from Syria to Azerbaijan — proved decisive this year when it rescued the UN-recognised Government of National Accord. 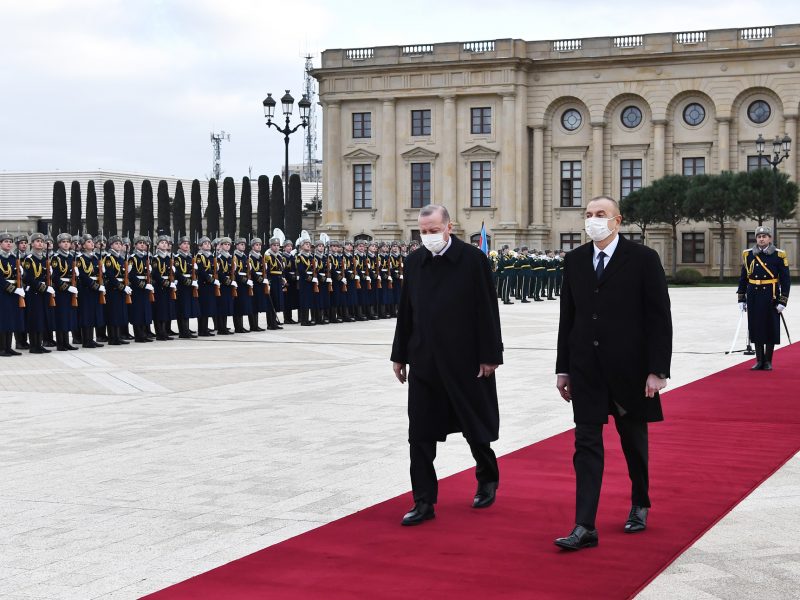 Turkish President Recep Tayyip Erdoğan on Thursday (10 December) renewed a call for a change of leadership in Armenia, as he reviewed a military parade marking that country’s defeat by Azerbaijan in a war in the disputed enclave of Nagorno-Karabakh.

Turkey helped the Tripoli-based GNA push back an offensive by forces loyal to eastern-based strongman Khalifa Haftar, who is backed by Egypt, the United Arab Emirates and Russia.

This also helped Turkey on a separate issue, a contest with Greece and Cyprus for offshore gas deposits, after Ankara signed a deal with the GNA laying claim to vast maritime territories.

Emadeddin Badi, an analyst at the Global Initiative Network, said that “Turkey is trying… to leverage its military investment for influence”.

Its military footprint is now significant in Libya, a country seeking a permanent peace following a UN-brokered ceasefire.

“Turkey has the largest military base on the Tunisian border, a naval base, (and) camps populated by Syrian mercenaries,” said Jalel Harchaoui of the Clingendael Institute in The Hague.

Vermeren said that “in Libya, Turkey has made itself essential, through ‘hard power’.

“In the rest of the Maghreb, it is ‘soft power’ perhaps — but with major economic artillery all the same.”

In the countries west of Libya, Turkey’s focus has been on trade and investment.

More than 1,200 Turkish companies have set up shop in Algeria, a country Erdoğan visited early this year and also helped with Covid-19 medical supplies.

Turkey has become the third largest importer of Algerian products, and the two countries aim to boost trade to €4.1 billion a year.

In other outreach, Turkey helped in recent years with the restoration of the Ottoman-era Ketchaoua Mosque in Algiers.

Turkish imports to the Maghreb region have risen sharply, especially “Made in Turkey” textiles that squeeze out locally made goods.

“The Turks have flooded the textile market and killed many Moroccan brands,” said one manufacturer in the kingdom, which in October revised a 2006 free trade deal.

In Tunisia, businesses have also been hit by low-cost Turkish products which have increased since a 2004 free trade deal, and Tunis in 2018 reimposed some import duties.

There is, however, another source of appeal to many in the region — Erdoğan himself, who has backed the Muslim Brotherhood even as it is labelled a “terrorist organisation” by Egypt and several other Arab nations.

The Turkish head of state borrows from a tradition dating back to Egypt’s Gamal Abdel Nasser as “another Mediterranean leader who insults Europe and presents himself as a defender of Muslims,” the historian said.

Harchaoui agreed the approach appeals to many Maghreb youngsters, judging that “a whole section of the youth sees in the Turkish example a model of independence”.