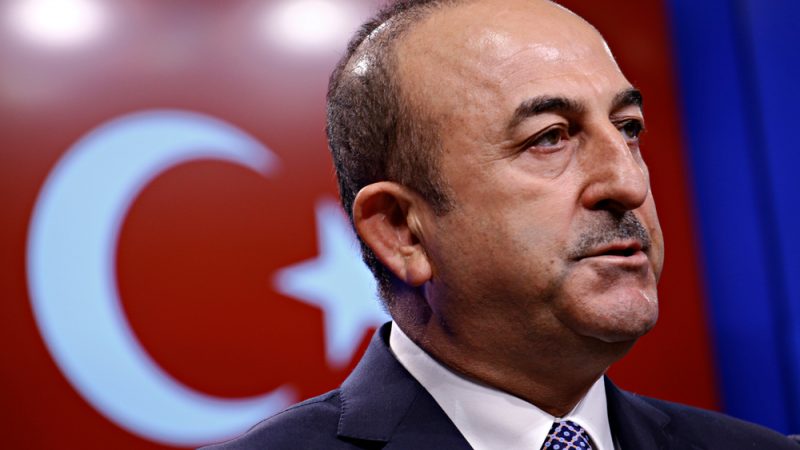 Çavuşoğlu: "In the Aegean, Greece cannot extend its borders to 12 miles. This is a cause of war (casus belli). We are not going to allow Greece to extend its territorial waters from 6 to 12 miles." [Alexandros Michailidis/Shutterstock]

The statement came just one day after EU member states decided to sanction Turkey in case Ankara does not withdraw its naval forces from the Eastern Mediterranean.

Greece is due to double its western territorial waters with Italy to 12 nautical miles, a right provided under the United Nations Convention on the Law of the Sea, which Ankara has not signed up to.

Greek prime minister Kyriakos Mitsotakis also left the door open for a similar move on the eastern side with Turkey.

The Greek islands in the Eastern Mediterranean are very close to Turkey’s continental territory.

“In the Aegean, Greece cannot extend its borders to 12 miles. This is a cause of war (casus belli). We are not going to allow Greece to extend its territorial waters from 6 to 12 miles. I am being pretty clear,” Çavuşoğlu said.

Both Turkey and Greece are members of the NATO military alliance, which has so far  prevented the arch-foes from engaging in military adventures.

The situation in the Eastern Mediterranean has escalated dangerously since major offshore gas drilling projects have taken shape. On 10 August, Turkey sent the Oruç Reis research vessel accompanied by warships into Greek waters, to which Greece responded by dispatching its own warships to track the Turkish vessels.

At an informal meeting of EU foreign minister in Berlin last week, EU member states agreed on a list of sanctions against Ankara in case Turkey does not de-escalate tensions in the region.

“We (the EU member states) are clear and determined in defending the European Union’s interests and solidarity with Greece and Cyprus. Turkey has to refrain from unilateral actions. This is a basic element to allow the dialogue to advance,” EU top diplomat Josep Borrell said.

He also underlined that “the most pressing and urgent thing is to solve the question of the drillings and the presence of Turkish boats in Greek and Cypriot waters, which is something dangerous.”

However, Çavuşoğlu seemed to defy EU calls on Saturday when he said the Oruç Reis would remain in the region for another three months.

Contacted by EURACTIV.com, an EU spokesperson said the ministers have asked Council Working Groups to speed up their work in order to add individuals to the list of people targeted with EU sanctions, with a view to a rapid adoption.

“Ministers also agreed that in the absence of progress in engaging with Turkey, the EU could develop a list of further restrictive measures that could be discussed at the European Council on 24-25 September.”

EU officials in Berlin expressed their concern about the situation, saying that given the high number of warships in the region, an accident cannot be ruled out.

Europe’s primary objective is de-escalation and then dialogue.

Athens raised the issue of Turkey’s “casus belli” at the foreign affairs meetin,g saying that no dialogue can take place as long as the threat of war is on the table, EURACTIV has learnt. It’s not clear how the rest of EU member states reacted.

In an op-ed published on Le Journal du Dimanche, Borrell lashed out against Turkey, which together with China and Russia, intend to “revive the memory of the great empires of the past”.

Faced with these “new empires”, Borrell called for the birth of a “geopolitical Europe”.

“In order to be able to negotiate and settle conflicts peacefully, we must also learn to speak the language of power,” Borrell said.

The EU sanctions against Turkey will be implemented in phases. In practice, Turkey has one month to de-escalate until the next EU summit on 24-25 September, when the first phase of sanctions, targeting Turkey’s energy sector, would be decided.

If Ankara does not comply, then further sanctions would be imposed on Turkey’s financial sector, with the possibility to cut EU funds or even a travel ban.

Turkey is still considered by the EU as a candidate country, although its accession negotiations are frozen.

Germany, Italy and Malta are the more cautious about slapping sanctions on Turkey, according to diplomatic sources. Those countries reportedly expressed fears that Turkey could retaliate by releasing towards Europe the four million of migrants currently held on its soil.

Diplomats say France and Austria have adopted the toughest stance against Turkey. Paris has already sent warships in the region, while Vienna asked once again for the official end of Turkey’s EU accession process.

“Do Greek and French people accept what can happen to them because of their greedy and incompetent leaders?” Erdoğan said.

The Turkish President added that Ankara was ready to pay the price to affirm its sovereignty. “I firmly believe that there is no obstacle in the steps of Turkey with the help of Allah,” he said.