Turkey detains over 200 migrants in Aegean 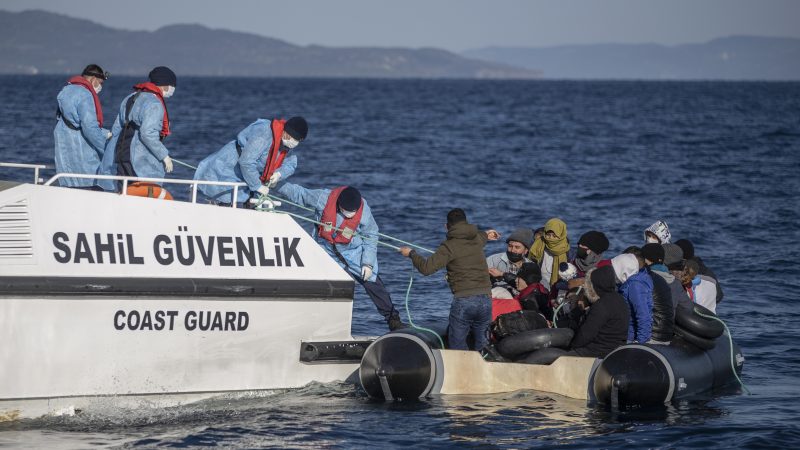 Members of the Turkish Coast Guard take migrants, who were allegedly pushed back from the Greece side, on a boat during a patrol to search and rescue for migrants offshore the Ayvalik district in Balikesir, Turkey, 10 April 2021. [EPA-EFE/ERDEM SAHIN]

Turkey’s coast guard has detained more than 200 migrants, including Afghans and Syrians, who were crossing the Aegean Sea on a fishing boat in an attempt to reach Greece, local media reported.

The number was one of the largest reported this year, reflecting a rise in the flow of people seeking refuge in Europe after a lull caused by the coronavirus pandemic.

The 231 migrants — from Afghanistan, Syria, Iran, Eritrea, Yemen and Pakistan — were stopped by the Turkish coast guard off the town of Ayvacik, near the Greek island of Lesbos, the private DHA new agency reported.

The police also detained two alleged organisers who were paid between $6,000 and $7,000 by migrants to smuggle them into Italy, the news agency said.

Turkey is one of the main transit routes for migrants from Afghanistan and parts of North Africa and the Middle East.

Ankara concluded an agreement with the EU in 2016 aimed at curbing the flow of migrants to Europe, under which it hosts settlement camps in return for incentives such as financial assistance.

Turkey wants the EU to update the deal, with Afghanistan high on the agenda because of the ongoing withdrawal of US and NATO forces.

Austrian Chancellor Sebastian Kurz raised eyebrows in Ankara last weekend when he told Germany’s Bild newspaper that Turkey is “a more suitable place” for Afghans to settle in than EU nations.

The Turkish foreign ministry called the comments “selfish”, warning that Turkey “will not be the border guard or refugee camp for the European Union”.

Erdogan last year opened the gates for migrants to Europe — leading to days of skirmishes at the Greek border — an action which drew the wrath of EU leaders, who accused Ankara of “blackmail”.

One response to “Turkey detains over 200 migrants in Aegean”