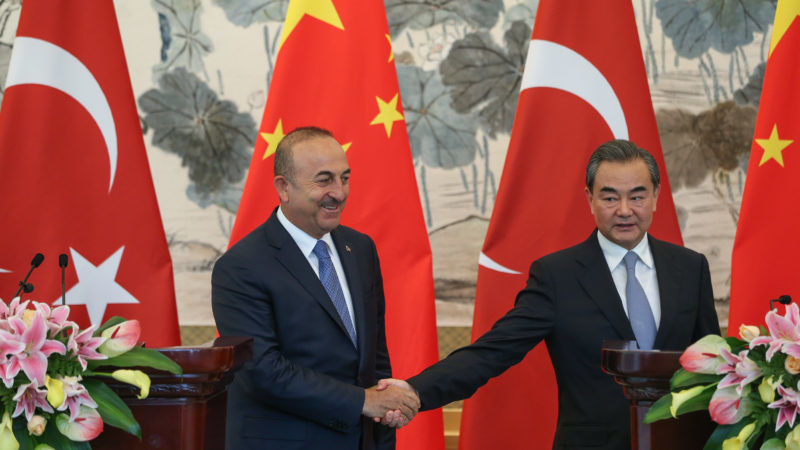 Turkey regards China’s security as akin to its own and will move to stamp out any anti-China reports in its media, Turkish Foreign Minister Mevlüt Çavuşoğlu said on Thursday (3 August), after meeting his Chinese counterpart.

China and Turkey have repeatedly vowed to step up cooperation on security and counter-terrorism, amid Beijing’s concerns about ethnic Uighurs from its restive far western region of Xinjiang fighting with militants in the Middle East.

“We take China’s security as our security,” Çavuşoğlu said, speaking through a Chinese translator during a joint news briefing with Wang in Beijing.

“We absolutely will not allow in Turkey any activities targeting or opposing China. Additionally, we will take measures to eliminate any media reports targeting China,” he added, but did not give details.

Hundreds, possibly thousands, keen to escape unrest in Xinjiang have traveled clandestinely via Southeast Asia to Turkey, with which many see themselves as sharing religious and cultural ties.

Beijing says some Uighurs then end up fighting with Islamist militants in Iraq and Syria. It denies accusations that it restricts the Uighurs’ religious freedoms.

European leaders have been alarmed by Turkish President Tayyip Erdoğan’s crackdown on opponents since a failed coup attempt last year, and what critics see as his attack on free speech.

The Brief: The man who would be king

This Sunday, Turkey will decide if it wants to appoint a dictator. Tomorrow marks exactly 30 years since the country submitted its application to join the European Union.

About 150 media outlets have been shut and around 160 journalists jailed, the Turkish Journalists’ Association says.

Turkish authorities say the crackdown is justified by the gravity of the coup attempt, in which rogue soldiers tried to overthrow the government, killing 250 people, mostly civilians.

In 2015, Turkey angered China by expressing concern about reports of restrictions on worship and fasting by Uighurs in Xinjiang during the holy month of Ramadan. Turkish protesters have marched on China’s embassy and consulate in Turkey over the treatment of Uighurs.

The two countries have also quarreled over Thailand’s deportation of Uighur migrants back to China.

But Ankara is keen to tap into Beijing’s ambitious Belt and Road infrastructure investment plan to link China with the rest of Asia and the world. Erdogan visited China in May when President Xi Jinping hosted his first Belt and Road summit.

“China is willing to work with Turkey to enhance the ancient spirit of the Silk Road, … and in jointly promoting the Belt and Road plan unlock new cooperative potential,” Foreign Minister Yi Wang added.