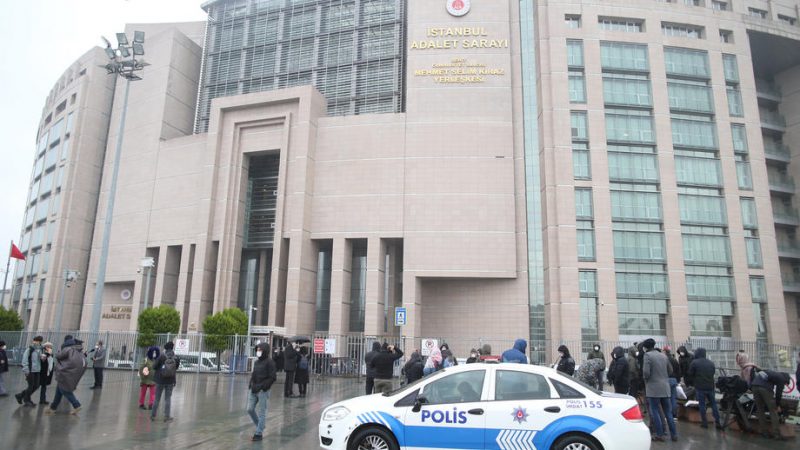 File photo. People and representatives of some of European countries' embassies arrive for attending a trial of jailed Turkish businessman and philanthropist Osman Kavala, who has gone on trial on charges connected with a failed 2016 coup, in Istanbul, Turkey, 18 December 2020. [EPA-EFE/ERDEM SAHIN]

Turkey’s Foreign Ministry summoned the ambassadors of 10 countries, including the United States, Germany and France, over a statement calling for the release of philanthropist Osman Kavala, state-owned Anadolu agency said on Tuesday (19 October).

The statement, shared by some embassies, said Kavala’s case “cast a shadow over respect for democracy”; it included Canada, Denmark, the Netherlands, Norway, Sweden, Finland, New Zealand, the USThanks , France and Germany.

As of today, Osman Kavala has been detained for four years. His ongoing case has cast a shadow over democracy and rule of law in Turkey.

Today, the United States together with 🇩🇪🇫🇷🇳🇿🇨🇦🇫🇮🇸🇪🇳🇴🇩🇰call for his release! See our full statement here: https://t.co/fCs5Lk5BCW pic.twitter.com/eyOq1loSM3

Osman Kavala, 63, a civil activist, has been in jail since his arrest in October 2017, facing a string of shifting charges linked to 2013 protests and a 2016 failed coup bid. He has been jailed for four years without being convicted, despite the European Court of Human Rights’ calling for his release.

The Council of Europe warned Friday that Turkey could soon face rare disciplinary proceedings if it does not release Kavala.

The rights body’s committee of ministers, which is responsible for overseeing the implementation of ECHR judgements, said they intended “to commence these (infringement) proceedings in the event that the applicant is not released before” their next meeting, from 30 November to 2 December.

It said that the response by Turkish authorities up until now “suggests a refusal by the respondent State to abide by the final judgement of the Court.”

It is the first such warning Turkey has received that the infringement procedure is imminent.

The proceedings can result in the suspension of the member state’s voting rights and membership in the Council of Europe, which Turkey joined in 1950.

Launching the proceedings would need approval from 32 of the Council’s 47 member states, which would put Turkey under formal notice.

The case would then be referred to the ECHR for a final ruling.

Russia in 2017-2019 was the first country to have its voting rights suspended when the Council of Europe took actions against its annexation of Ukraine’s Crimea peninsula in 2014.

If Kavala is not freed, Turkey would “face shame of being referred back to” the ECHR, he said.

“The ball (is) firmly in Turkey’s court, (it is) high time to do the right thing and release him immediately,” he wrote.

Infringement proceedings against a member state for failing to implement ECHR judgements have been used just once before, in a 2017 case involving the Azerbaijani opposition activist Ilgar Mammadov.

Mammadov was released from jail in August 2018.

Turkish President Recep Tayyip Erdoğan has repeatedly accused Kavala of being the agent of billionaire financier and pro-democracy campaigner George Soros. Turkish courts have repeatedly turned down petitions from his lawyers for his release.

The ministers’ committee also urged the release and quashing of the conviction of Kurdish politician Selahattin Demirtas, formerly the leader of Turkey’s main pro-Kurdish party, who has been jailed since 2016.

They vowed to re-examine his case at the next meeting.

Erdoğan has faced repeated criticism over the crackdown on opposition activists and politicians in the wake of the failed 2016 coup bid.