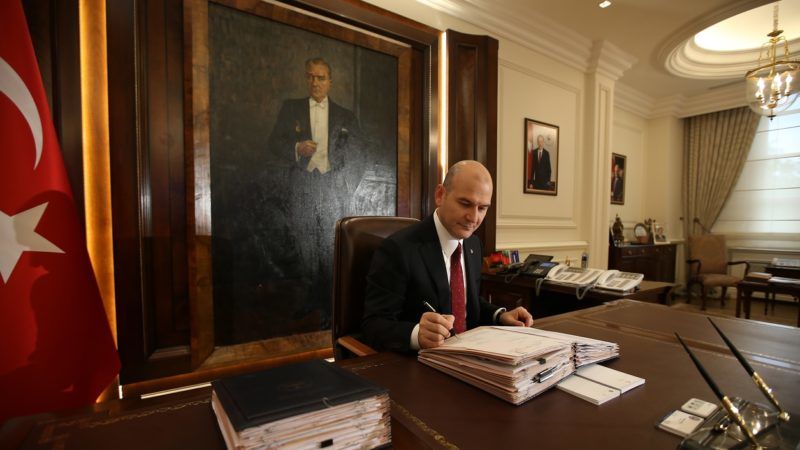 Turkey’s Interior Minister Suleyman Soylu has threatened to “blow the mind” of Europe by sending 15,000 refugees a month to EU territory, in an intensifying dispute with the bloc.

Ankara and Brussels almost a year ago on 18 March signed a landmark deal that has substantially lessened the flow of migrants from Turkey to Europe.

But the accord is now hanging in the balance due to the diplomatic crisis over the blocking of Turkish ministers from holding rallies in Europe.

“If you want, we could open the way for 15,000 refugees that we don’t send each month and blow the mind” of Europe, Soylu said in a speech late on Thursday (16 March), quoted by the Anadolu news agency.

Foreign Minister Mevlut Cavusoglu has already indicated that Turkey could rip up the deal and said Turkey was no longer readmitting migrants who crossed into Greece.

The crisis was sparked when the Netherlands and Germany refused to allow Turkish ministers to campaign in a 16 April referendum on expanding President Recep Tayyip Erdoğan’s powers, prompting the Turkish strongman to compare them with Nazi Germany.

“They are trying to complete the work that they did not finish. Who is doing this work? It’s the Netherlands and Germany,” Soylu said.

He accused Europe of failing to help Turkey enter the bloc and of not helping with its fight against terror.

“Europe, do you have that kind of courage…? Let us remind you that you cannot play games in this region and ignore Turkey,” he added.

The European Union had said it expects Turkey to continue implementing the deal, which drastically cut the numbers making the dangerous passage across the Aegean Sea.

The mass influx of migrants to Europe in summer 2015 was seen as boosting the support of the far-right on the continent.

A key pillar of the deal were pledges by Turkey to boost border security and break people-smuggling networks, moves that analysts say slowed the migrant flow to a trickle.

6 responses to “Turkey threatens to send Europe ‘15,000 refugees a month’”