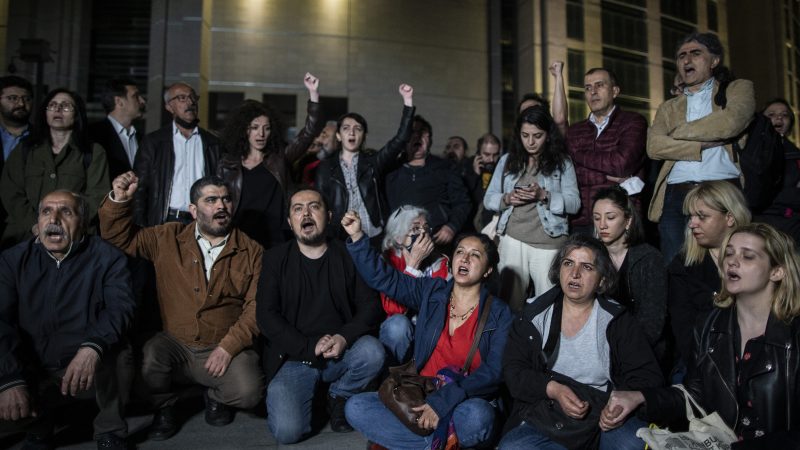 Turkish philanthropist Osman Kavala was jailed for life without parole on Monday (25 April) after he was convicted of trying to overthrow the government by financing protests, in a case that Europe’s top court and Western powers say is politically motivated.

Kavala, 64, had been in jail for 4-1/2 years without a conviction and denied the charges he faced over the Gezi protests, which began as small demonstrations in an Istanbul park in 2013 and snowballed into nationwide anti-government unrest.

The court also sentenced seven others to 18 years in jail each for aiding an attempt to overthrow the government and ordered their arrests. The court said it decided to acquit Kavala of espionage charges due to lack of evidence.

The courtroom was packed with more than 200 people, including opposition members, Western diplomats and rights activists.

The defendants’ supporters yelled at the judges as the ruling was read out. Many of them cried as the seven defendants, including 71-year-old architect Mucella Yapici, were taken into custody.

“This is just the beginning; the struggle goes on,” the crowd chanted.

In his last words before the verdict, Kavala said the prosecutor’s request for a life sentence was based on “evidence that is not evidence” and amounted to “an act of assassination by use of the judiciary”.

Kavala played a major role developing Turkish civil society before he was detained in 2017, from a publishing house that aimed to foster social change after Turkey’s 1980 coup to boosting culture via his Anadolu Kultur organisation.

The US and EU reactions were rather low key.

Turkey sentences philanthropist Osman #Kavala to life in prison & other human rights defenders to 18 years. Western allies will condemn baseless judgement – but Erdogan knows they need him on Ukraine, so it’s a convenient time to push through what he wants https://t.co/0eSdkJEpxS

The United States called on Turkey to release Kavala.

“We remain gravely concerned by the continued judicial harassment of civil society, media, political and business leaders in Turkey,” the State Department said in its statement.

Deeply troubled and disappointed by the unjust conviction of human rights advocate and philanthropist Osman Kavala today. In line with @ECHR_CEDH rulings, we again call on Turkey to release Kavala and all others arbitrarily detained. https://t.co/AuMWrohjk4

EU foreign affairs chief Josep Borrell regretted that the sentences showed “maximum harshness” and that they ignored the decision of the European Court for Human Rights.

The Turkish Court's life sentence for Osman Kavala together with heavy prison sentences for other defendants show maximum harshness.

They ignore the decision of the European Court for Human Rights.

Respecting fundamental rights and freedoms is today more important than ever.

Responding to the conviction of Kavala and seven other defendants for aiding him, Nils Muiznieks, Amnesty International’s Europe director, said: “Today, we have witnessed a travesty of justice of spectacular proportions. This verdict deals a devastating blow not only to Osman Kavala, his co-defendants and their families, but to everyone who believes in justice and human rights activism in Turkey and beyond.”

“The court’s decision defies all logic. (…) This unjust verdict shows that the Gezi trial was only an attempt to silence independent voices.”

The European Court of Human Rights (ECHR) and activists have said the case is politically motivated and part of a crackdown on dissent under President Tayyip Erdoğan – accusations the government dismisses.

The ECHR called for Kavala’s release in late 2019 and ruled his detention was meant to silence the philanthropist, whose civil society projects aimed to foster social change.

Ankara now faces being suspended from the Council of Europe rights watchdog, after infringement proceedings were launched due to his continued detention.

Turkey on Thursday (2 December) called on the Council of Europe to avoid punishing Turkey ahead of a decision this week on whether Ankara could face rare disciplinary proceedings over the case of a jailed activist.

Emma Sinclair-Webb, Turkey representative for Human Rights Watch, said the verdict was an “active defiance against the Council of Europe”.

Embassies of Turkey’s Western allies, including the United States and Germany, echoed the call for Kavala’s release last year, prompting threats by Erdoğan to expel their ambassadors.

Erdoğan has likened the Gezi protesters to Kurdish militants and those accused of orchestrating a failed 2016 coup. He has accused Kavala of trying to overthrow the government, saying Western allies would not release “bandits, murderers and terrorists” in their countries.

Kavala was acquitted in 2020 of charges related to the Gezi protests. Hours later another court ordered his arrest on a charge of attempting to overthrow the constitutional order related to the coup attempt.

That court later ruled to release him on that charge but ordered his detention on an espionage charge in the same case, a move critics said was aimed at circumventing the ECHR ruling.

Kavala’s acquittal along with eight others in the Gezi trial was overturned last year and the case was combined with the other charges against him.

Sera Kadigil, a member of parliament from the Workers’ Party of Turkey, said the verdict was the AK Party’s revenge on Gezi protests and that the court carried out the government’s instructions.

“There is no justice in this country. We cannot speak of impartial court. This ruling made this official,” she said.