Protestors gather in front of the Istanbul Courthouse to support journalists of daily newspaper Cumhuriyet after the court had upheld sentences against them, in Istanbul on 21 February 2019. [EPA-EFE/SEDAT SUNA]

More than 20 human rights and free speech organisations, as well as the Turkish opposition, have condemned a report by a Turkish pro-government think tank “blacklisting” journalists working for foreign media.

The Foundation for Political, Economic and Social Research (SETA) think-tank published the report on Friday and presented it as an academic study of the news coverage. The report lists foreign media with Turkish services and accuses international media of bias against the government.

SETA was created by an adviser to Turkish President Recep Erdoğan, but it describes itself as an independent and non-profit think-tank. The report focuses on the BBC, Deutsche Welle, Voice of America, Sputnik, Euronews, Independent and China Radio International.

The report includes detailed information about journalists and their work, traces what they wrote on social media, especially about the failed coup attempt in 2016, the Kurdish issue, economy and Turkey’s military intervention in Syria.

Based on that coverage, it drew a link between journalists and terrorist organisations and anti-government groups.

“Such a witch hunt is especially dangerous in the tension and political polarisation that currently characterise Turkish society,” commented Reporters Without Borders.

The BBC rejected the allegations in this report. “The ‘blacklisting’ of journalists is completely unacceptable. It is vital that journalists can work freely, without threats and intimidation and the Turkish authorities must ensure media freedom,” the BBC said.

Euronews added that “It singles them out by profiling them, in what can only be construed as an attempt to intimidate, in total disregard of press freedom.”

It goes without saying that the journalists who've been stalked, targeted and blacklisted in the SETA report are amongst Turkey's finest, which is of course *why* they've been offered up on a de facto target-list.

The leader of the main opposition party CHP, Kemal Kılıçdaroğlu, said the report was “a disgrace to the history of our media”.

“This report equates to profiling. SETA is not a think tank; it only serves to blow the government’s trumpet. It is a supposed non-governmental organization that fills its pocket and acts as a toady of the government,” he told a meeting of the CHP parliamentary group.

SETA rejected criticism and argued, that report is based on open sources and did not contain any other information.

The Turkish Journalists’ Union (TGS) took legal action and complained against SETA at Istanbul’s main court on Monday. They argued that the report illegally “recorded personal information” as well as “inciting people to hatred.”

The report also urges the public to warn the authorities when they notice “wrong content directly targeting Turkey”.

Hard times for journalism in Turkey

Turkey leads the world in jailing journalists and has one of the worst rankings on freedom of expression and media freedom.

Since the attempted coup in July 2016, more than 200 journalists have been arrested, usually on charges of being members or spreading the propaganda of terrorist organisations.

“The broad interpretation of the concept of terrorist propaganda, including in cases concerning journalists where there was no incitement to violence, has been repeatedly denounced, including by the Council of Europe Commissioner for Human Rights,” states the EU’s Platform for the Protection of Journalism and Safety of Journalists.

According to Reporters without borders, Turkey ranks 157 (out of 180) in the World Press Freedom Index.

“Spending more than a year in prison before trial is the new norm, and long jail sentences are common, in some cases as long as life imprisonment with no possibility of a pardon. Detained journalists and closed media outlets are denied any effective legal recourse. The rule of law is a fading memory in the “New Turkey” of paramount presidential authority,” writes Reporters Without Borders.

The Turkish Union of Journalists says that 135 journalists are currently jailed in Turkey. 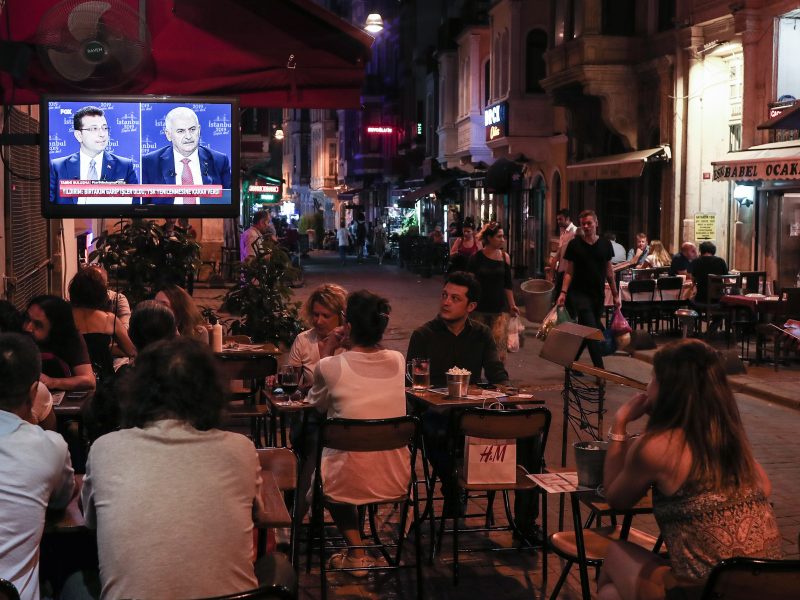 The two candidates for the re-run of the mayoral election in Istanbul met in the first live television debate in 17 years on Sunday (16 June). The re-run will be held on 23 June. The event was broadcast on all …

In 2016 the government shut down 140 media outlets and 2,500 workers in the media sector were sacked, and both media, social media and websites are subject to censorship. More than 100,000 websites are blocked, including Wikipedia.