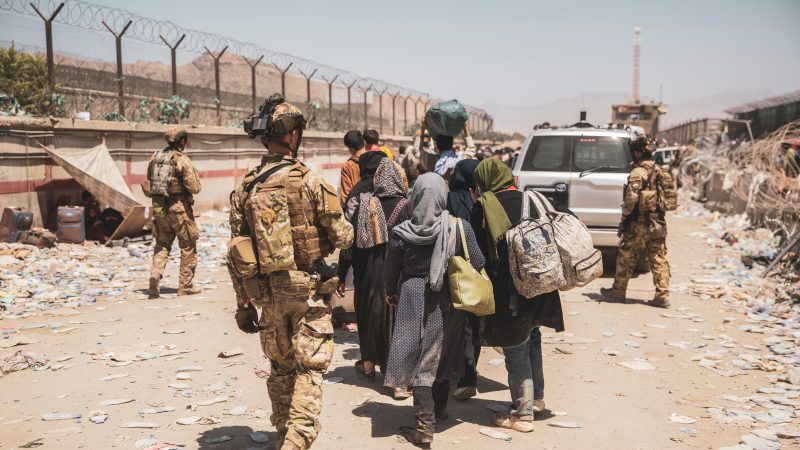 A handout photo made available by the US Marine Corps via DVIDS showing Italian coalition forces assist and escort evacuees for onward processing during an evacuation at Hamid Karzai International Airport, Kabul, Afghanistan, 24 August 2021. [Handout photo/EPA/EFE]

Ankara had been hoping to gain a foothold in Kabul after the US troop withdrawal is completed on Tuesday.

But the Taliban’s swift capture of the Afghan capital left those plans in disarray, eliminating a key point of leverage in its tumultuous relations with the United States.

“The Turkish Armed Forces are returning to our homeland with the pride of successfully fulfilling the tasks entrusted to it,” the Turkish defence ministry said in a statement.

Turkey had more than 500 non-combat troops stationed in Afghanistan as part of NATO’s now-abandoned mission in the war-torn country.

“It is important for Afghanistan to stabilise,” Erdoğan said as the troop withdrawal was announced.

“Turkey will continue to be in close dialogue with all parties in Afghanistan in line with this goal.”

The Turkish defence ministry also left open the option of playing a security role in Kabul down the line.

“Turkey will continue to be with the Afghan people as long at they want,” it said, noting the troops had been stationed at the airport for the past six years.

Erdoğan has been under intense political pressure at home not to accept migrants that might come from Afghanistan in response to the fundamentalist Islamist group’s rise.

Turkey became home to more than four million migrants — most of them from Syria — under a deal that helped stem the European Union’s migrants crisis in 2016.

Ankara is building a wall along its eastern border to Iran to keep out Afghans trying to use the route to enter Europe.

Erdoğan said Turkey was now home to roughly five million migrants of various status and could not accept any more.

“We cannot handle an additional burden of migration originating from Syria or Afghanistan,” he said.

Foreign Ministry Mevlüt Çavuşoğlu said on Tuesday that Ankara has evacuated 1,404 people from Afghanistan — 1,061 of them Turkish nationals.

Çavuşoğlu added that only 200 or so Turks still wanted to get out of Kabul, leaving around 3,000 Turkish nationals who had told embassy officials that they were willing to stay.

The defence ministry said Wednesday that 1,129 people had been evacuated “with its aircraft”.

It did not explain why its figures differed from those issued by Çavuşoğlu.