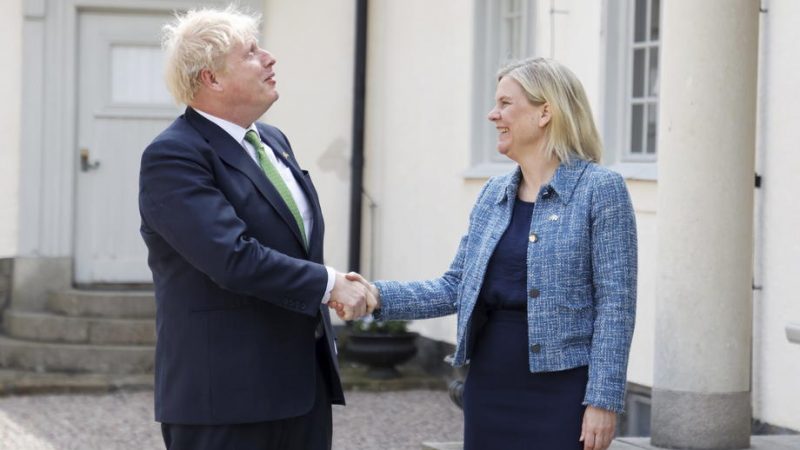 On Wednesday, UK Prime Minister Boris Johnson and his Swedish counterpart Magdalena Andersson signed a “political declaration of solidarity”, Johnson said after meeting with Andersson. Later in the day, Johnson and the Finnish President Sauli Niinistö signed a declaration in Helsinki to reinforce their security and fortify northern Europe’s defences.

Citing Winston Churchill – “one always measures friendships by how they show up in bad weather” – the Finnish president started the press conference by pointing to Finland and the UK being old friends and security partners.

Finland aims to maximise its security, and the country joining NATO is not an act against anyone, said Niinistö. Asked about Russia’s possible reactions, Niinistö said that Russia’s actions have made Finland and Sweden abandon their traditional policy of non-alignment.

Johnson, for his part, described the moment as “pivotal” and referred to the security assurances as “formalising” the already close cooperation between the countries and as a “basis for further work” in areas such as cyber security and intelligence activities.

Earlier in the day, Johnson signed a similar agreement with Sweden, which Andersson called a step towards stronger cooperation between the countries.

“Russian President Vladimir Putin thought he could divide the West”, Andersson said at a press conference at Harpsund, adding that “he has achieved the opposite. We stand here today more united than ever and with an ambition to strengthen our ties even further.”

“I value our cooperation and our close relations. There is a common desire to deepen cooperation, especially in security and defence. Today we are taking another step towards strengthening our bilateral defence and security cooperation,” Andersson said.

Johnson said that “we are facing a new reality”, adding that “if Sweden is attacked and requests support from us, we will provide it”.

The mutual security assurances come after UK Defence Minister Ben Wallace said on 4 May that it would be “inconceivable” for the UK not to defend Finland and Sweden regardless of NATO membership when he visited Finland and the Arrow 22 military exercise of troops from the UK, Finland, Estonia, Latvia and the US.

The support provided by the UK would, in practice, mean the deployment of the Joint Expeditionary Force (JEF), a coalition which was established by the UK, Denmark, Norway, Estonia, Iceland, Latvia, Lithuania and the Netherlands in 2014 after the Crimean occupation. Finland and Sweden joined JEF in 2017. Its core is said to consist of some 10,000 British commandos.

Next to the assurances given by the UK, Norway, Denmark, and Iceland are about to announce their support for Finland and Sweden during the NATO application period, reported the Norwegian newspaper Verdens Gang (VG) on Wednesday (11 May).

Also on a visit to Helsinki on Wednesday, Estonian President Alar Karis told broadcaster YLE in an interview that reactions against the NATO applications of Finland and Sweden can be expected but that measures are unlikely to be military.

The final countdown to both countries’ NATO membership application is on.

On the Finnish side, President Sauli Niinistö and Prime Minister Sanna Marin will hold a joint press conference to state their support for the application on Thursday, after which the ruling Social Democratic party will decide on the matter on Saturday and the Ministerial Committee on Foreign and Security Policy will officially decide on Sunday, with parliament voting on the issue on Monday.

On the Swedish side, the ruling Social Democrat party is expected to give its new orientation on NATO on Sunday, which could entail an application of the country to NATO as a vast majority of the Swedish Riksdag will then be in favour of joining the Alliance.