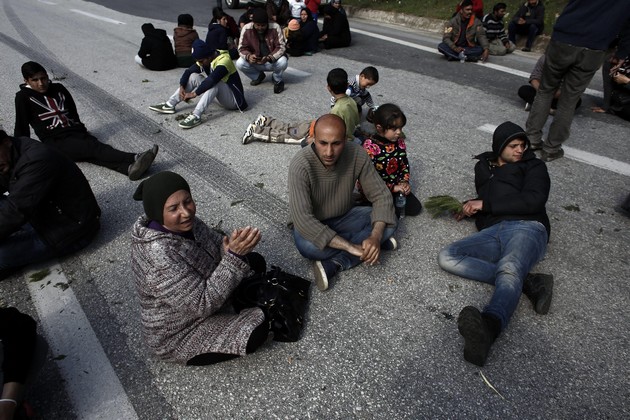 Refugees and migrants block the highway to the border crossing of Evzoni during a protest. [Kostas Tsironis/dpa]

Some 1.3 million asylum seekers, mostly from conflict-torn Syria and Iraq, have flooded into Europe since the start of 2015, stretching resources and aggravating popular resentment in some countries.

The bloc has struggled to respond to the crisis – the biggest movement of people to hit the continent since World War II – which has threatened the collapse of the EU’s cherished passport-free Schengen zone.

Concerns about a surge in immigrants was a major factor in the British public’s vote to leave the European Union in June.

“Europe’s efforts to address this colossal refugee crisis has been lamentable,” said Keith Vaz, chair of the parliamentary Home Affairs Committee, which published the report.

“The EU and its member states failed to anticipate the scale of migrant flows, and did not have the structures and mechanisms in place to cope.

“As a result, the EU has been too slow to respond in a coordinated way,” said the report, which was based on a year-long inquiry.

The cross-party committee described a controversial deal with Turkey to send back Syrians who land on Greece’s islands as a “meaningful response”, but one that had come “far too late”.

So far this year more than 256,000 people have reached European shores, while more than 3,100 have been reported as dead or missing, according to the UN refugee agency.

The Home Affairs Committee said individual countries such as Greece and Italy should not be left to cope alone, and called for a greater focus on stopping people-trafficking boats from Libya.

Lawmakers also said Britain did not have full control of its shores, describing the number of Border Force vessels in operation as “worryingly low”.

France on Monday introduced sea patrols for passenger ferries to and from Britain, as part of increased security measures following a number of jihadist attacks in the country.

The European Union’s new border and coast guard agency is developing migration ‘stress tests’, based on the system used to evaluate the resilience of banks to economic shocks, in a bid to stop future refugee crises in the passport-free Schengen zone.

The UK committee said the large number of unregistered migrants in Europe’s border-free Schengen “exacerbates existing security threats”, but urged London to uphold its commitment to refugees from Syria.

Britain has said it will receive 20,000 Syrian refugees by 2020, of more than four million who have fled the country’s civil war.