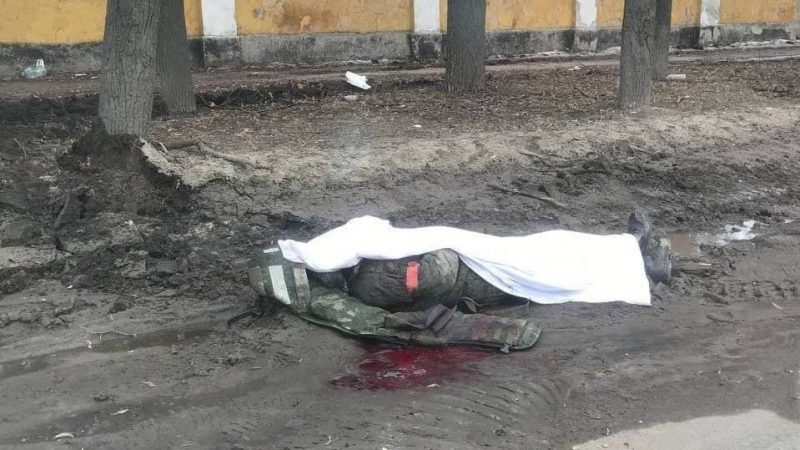 Abandoned dead body of a Russian soldier in Ukraine [Twitter]

Ukraine is gathering the bodies of dead Russian soldiers strewn among the rubble of formerly occupied towns and using everything from DNA to tattoos to verify their identities in the hope of exchanging them for prisoners of war.

Volunteers have helped the military gather 60 bodies in the northeastern region of Kharkiv where Russian forces have retreated in recent weeks, stacking them up in a refrigerated rail carriage.

Bodies are sometimes used as part of prisoner exchanges and other times in exchanges for Ukrainian bodies, said Anton Ivannikov, captain of military-civil cooperation branch, Ukrainian Armed Forces, which is coordinating the effort. The bodies of those related to high ranking officials can be especially valuable to an exchange.

“We are gathering all the documents, all the credit cards. Anything which would help us identify the body” including tattoos and DNA, Ivannikov said.

“In the future this will tell us which soldier, which brigade was in this region, for further exchange,” he said.

The bodies will travel on the train to Kyiv where the team negotiating exchanges is based, he said.

Ukraine Govt is taking photos of dead bodies of Russian soldiers and after using facial recognition tech to find their families, they’re sending those corpse images to their mothers. So humane https://t.co/DIwWJ83Gk0 #Ukraine #UkraineWar #UkraineRussiaWar #UkraineRussiaConflict

The recovery effort has been made possible due to Ukraine’s pushing of Russian forces from towns in the Kharkiv region – and largely out of artillery range of Kharkiv city, the second-largest in the country.

At a recent recovery effort in the village of Mala Rohan, just east of Kharkiv city, Reuters witnessed volunteers using ropes to drag the bodies of two Russian soldiers from a well between houses severely damaged by shelling.

At least one of the two had their hands tied, a sign, Ivannikov said, that they may have been punished as deserters. Reuters was unable to verify the circumstances of any of the deaths.

Two volunteers wrapped the bodies in white plastic tarpaulin and lifted them into a waiting ambulance.

The volunteers dug another body out of a shallow grave marked with a makeshift cardboard sign that said “Russian occupant buried here” with the soldier’s name and date of burial.

A fourth body – one of 12 found in the village over three days – was pulled from the basement of a woman’s home. He was left alone when his fellow servicemen retreated,” Ivannikov said. “Most likely, he shot himself.”

Russia’s Defence Ministry did not respond to a request for comment on the allegation that Russian soldiers may have been shot for deserting or on whether it would consider exchanging bodies for Ukrainian prisoners of war.

Russia is reportedly not interested in recovering dead bodies, because missing soldiers are not considered officially dead.

While the Ukrainian military recovers bodies around Kharkiv, about 240 kms to the south east, its forces are defending against intense assaults in the Donbas region of Eastern Ukraine.

Moscow calls its actions a “special operation” to disarm its neighbour. Kyiv said it never threatened Russia in any way and says the attack was completely unprovoked.