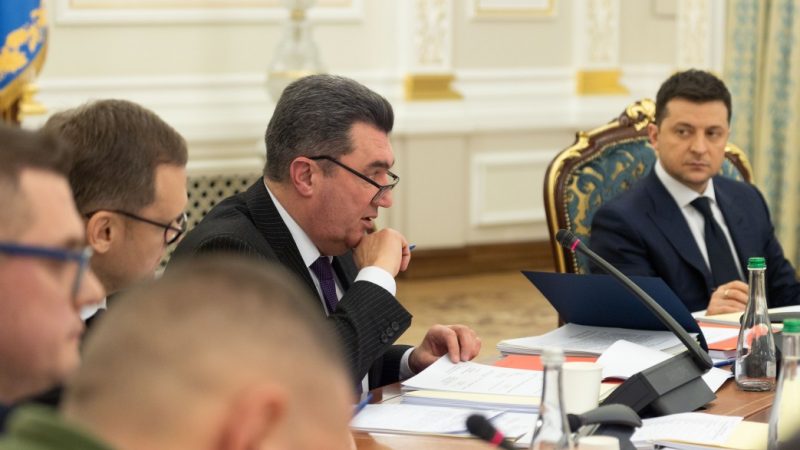 Ukrainian President Volodymyr Zelenskiy [L] chairing at National Security and Defense Council on 11 January 2022. [Website of the President of Ukraine]

Ukraine is ready to take the necessary decisions to end the war in its eastern Donbass region at a new summit of the leaders of Ukraine, Russia, France and Germany, Ukrainian President Volodymyr Zelenskiy said on Tuesday (11 January).

“It is time to agree on an end to the conflict, and we are ready for the necessary decisions during a new summit of the leaders of the four countries,” Zelenskiy said in a statement.

In the same statement, Zelenskiy’s chief of staff Andriy Yermak said Kyiv wanted to agree on measures such as implementing a ceasefire and more prisoner swaps.

The four-way Normandy format talks are aimed at helping end the conflict in eastern Ukraine between Ukrainian government forces and pro-Russian separatists, but stalled in November over differences on how to press ahead.

Since then, Russia has moved nearly 100,000 troops close to its border with Ukraine. It says it is not preparing for an invasion but wants to see the West back off from its support for Ukraine’s government and has demanded guarantees that US-led NATO will not expand further eastwards.

Senior French and German diplomats were in Moscow last week to see how to revive the Normandy format. French President Emmanuel Macron’s top diplomat travelled to Kyiv on Monday.

A French presidential official told reporters on Tuesday that he was hopeful senior advisers could hold a meeting this month after Kyiv had indicated it could make some political gestures to break the deadlock.

The official said Russia’s chief negotiator, Dmitry Kozak, had given the greenlight for talks to resume as had Zelenskiy and Yermak.

“The difficulties remain. We are not under any illusions, but we think we can hold a first meeting of the Normandy format advisers by the end of January,” the official said, speaking on condition of anonymity.

Kyiv’s ties with Moscow collapsed in 2014 after Russia’s annexation of Crimea and Moscow-backed forces seized territory in eastern Ukraine that Kyiv wants back. Zelenskiy says as many as 15,000 people have been killed in fighting since then.