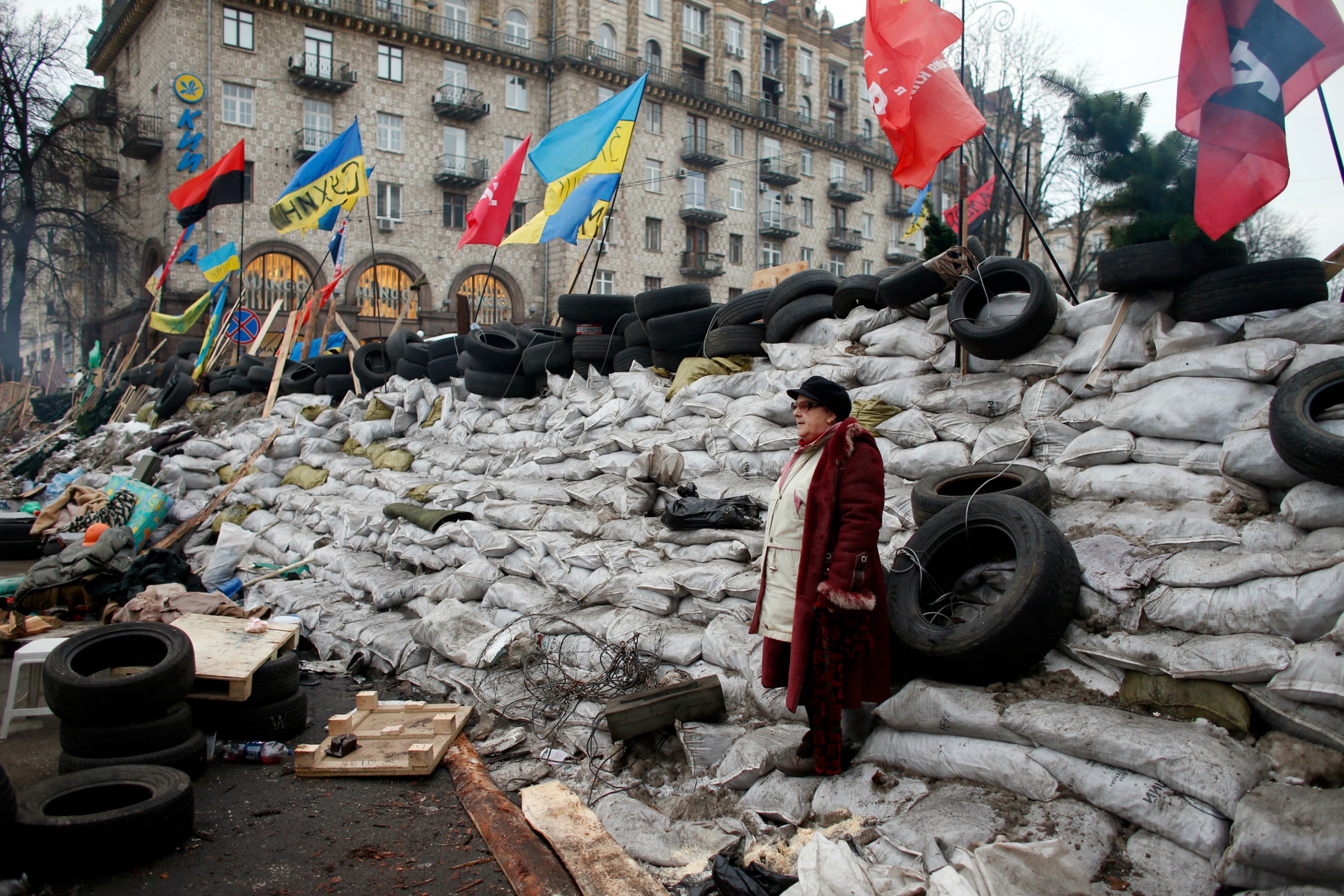 A pro-European integration protester stands on a barricade during a rally in Independence Square, in Kyiv. [Reuters]

US and European officials say they will hold Moscow responsible and impose new economic sanctions if the separatists do not clear out of government buildings they have occupied across swathes of eastern Ukraine over the past two weeks.

Washington, which signed last week’s accord in Geneva along with Moscow, Kyiv and the European Union [read more], said it would decide “in days” on additional sanctions if Russia does not take steps to implement the agreement.

US Secretary of State John Kerry urged his Russian counterpart, Sergei Lavrov, on Monday to help carry out the deal, including by “publicly calling on separatists to vacate illegal buildings and checkpoints”, spokeswoman Jen Psaki said.

“If they don’t take steps in the coming days, there’ll be consequences,” she told a news briefing on Monday. “Obviously, we would have to make a decision in the matter of – in a matter of days – if there are going to be consequences for inaction.”

The United States and the European Union have imposed visa bans and asset freezes on some Russians over Moscow’s annexation of Crimea from Ukraine last month. Those measures, designed to have limited economic impact, and to avoid deepening the crisis, have been mocked as pointless by Moscow.

Building a consensus on tougher measures is tricky in Europe, where many countries rely on Russian energy exports.

In its account of their telephone conversation, the Russian Foreign Ministry said Lavrov had called on Kerry to “influence Kyiv, not let hotheads there provoke a bloody conflict” and to encourage it “to fulfil its obligations unflaggingly.”

US Vice President Joe Biden arrived in Kyiv, where he is expected to announce a package of technical assistance. The visit is likely to be more important as a symbol of support than for any specific promises Biden makes in public.

The Geneva accord aimed to lower tensions, in the worst confrontation between Russia and the West since the Cold War. It calls for occupied buildings to be vacated under the auspices of the Organization for Security and Cooperation in Europe, or OSCE.

But no sooner had the accord been signed than both sides began accusing each other of breaking it, while the pro-Moscow rebels disavowed the pledge to withdraw from occupied buildings.

Mark Etherington, an OSCE mediator, held his first meeting with the leader of separatists in Slaviansk, a town that rebels have turned into a heavily fortified redoubt.

He said he had asked the pro-Russian self-proclaimed “people’s mayor” of the town, Vyacheslav Ponomaryov, whether he would comply with the Geneva agreement, but gave no hint about the response.

Ponomaryov later told a news conference: “We did not negotiate, we talked. We told them our position, what happened here, and they told us about their plans.”

In other signs the Geneva accord was far from being implemented, activists in Slaviansk brought up trucks laden with sand and were filling sandbags to reinforce their barricades.

In nearby Kramatorsk, local media showed masked gunmen taking over the office of the SBU security service and leading away a civilian identified as the local police chief.

Separatists said they would not disarm until Right Sector, a Ukrainian nationalist group in western Ukraine, did so first.

“Who should surrender weapons first? Let us see Right Sector disarm first. Let them make the first step and we will follow,” Yevgeny Gordik, a member of a separatist militia, told Reuters. “We need dialogue. This is not dialogue. It is monologue.”

Moscow blames the Right Sector for a shooting on Easter Sunday morning, when at least three people were killed at a checkpoint manned by armed separatists. Right Sector denies involvement, while Kyiv said Russia provoked the violence.

One European diplomat said the Geneva deal was a way for Russian President Vladimir Putin to buy time and undermine momentum towards tougher sanctions: “Talks and compromises are just part of his tactics,” said the diplomat. “He wants to have Ukraine.”

Putin announced last month that Moscow had the right to intervene in its neighbours to protect Russian speakers. He then annexed the Crimean peninsula.

Moscow has since massed tens of thousands of troops on the Ukrainian border, and Kyiv and its Western allies say Russian agents are directing the uprising in the east, including the “green men” – heavily armed, masked gunmen in unmarked uniforms.

In his latest move, likely to be seen by the West as a further threat to the post-Cold War order, Putin signed a law on Monday making it easier for Russian speakers across the former Soviet Union to obtain Russian citizenship.

Eastern Ukraine is largely Russian-speaking and many residents are suspicious of the pro-European government that took power in Kyiv in February, when Moscow-backed President Viktor Yanukovich fled the country after mass protests.

Separatists have declared an independent “People’s Republic of Donetsk” in the east’s biggest province and have named themselves to official posts in towns and cities, setting up checkpoints and flying Russian flags over government buildings.

There is also some support for Ukrainian unity in the region, but pro-Kyiv activists have had a lower profile since the separatists took up arms.

One activist who helped organise a unity rally in Rubizhne, a town in the eastern Luhansk region, told Ukraine’s Channel 5 television that separatists attacked it, forcing the rally to disperse. Local police said a policeman was hurt when unidentified people tried to disrupt the rally.

In the regional capital, Luhansk, Interfax-Ukraine news agency said a meeting of about 3,000 people in the local SBU headquarters had elected a “people’s governor” and voted to hold a two-stage referendum next month on union with Russia.

Ukraine announced an operation to retake rebel-held territory earlier this month, but that modest effort largely collapsed in disarray.

Kyiv has declared an “Easter truce”, although it is far from clear it could muster any real force if it tried. The army is ill-equipped, untested and untrained for domestic operations, while the government in Kyiv doubts the loyalty of the police.

The OSCE, a European security body that includes both NATO members and Russia, has so far deployed around 100 monitors and mediators in Ukraine and expects their number to rise.

An OSCE spokesman said the mediators were visiting separatist-occupied buildings with copies of last week’s Geneva accord to explain it to the people inside.

“It’s a mixed experience dealing with checkpoints and so forth and there is a varying reaction to teams. There is a hardened attitude in Donetsk or Slaviansk but some other areas are more accommodating,” spokesman Michael Bociurkiw said. “When teams go to smaller centres people are more willing to talk.”