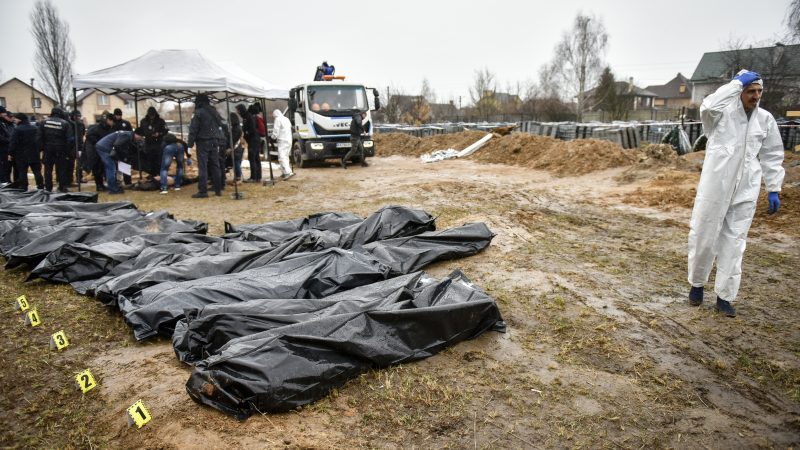 Ukraine said Sunday (10 April) it had found more than 1,200 bodies in the Kyiv region, the scene of atrocities allegedly committed by Russian troops, as residents in the country’s east braced — or fled — ahead of an expected massive offensive.

Heavy bombardments hammered Ukraine through the weekend, adding to mounting casualties six weeks into Russia’s invasion of its neighbour.

Shelling claimed two lives in northeast Kharkiv on Sunday morning, regional governor Oleg Synegubov said, the day after 10 civilians, including a child, died in bombings southeast of the city.

“The Russian army continues to wage war on civilians due to a lack of victories at the front,” Synegubov said on Telegram.

In Dnipro, an industrial city of around a million inhabitants, a rain of Russian missiles nearly destroyed the local airport, causing an uncertain number of casualties, local authorities said.

An AFP reporter saw black smoke in the sky above the facility, but a plane also took off later on Sunday, suggesting its runway was still functioning.

President Volodymyr Zelenskyy again condemned atrocities against civilians, and, after speaking with German Chancellor Olaf Scholz, said they had agreed “that all perpetrators of war crimes must be identified and punished”.

And White House National Security Advisor Jake Sullivan pledged the US would “work with the international community to make sure there’s accountability” for what he called “mass atrocities”.

At the Vatican, Pope Francis called for an Easter ceasefire to pave the way for peace, denouncing a war where “defenceless civilians” suffered “heinous massacres and atrocious cruelty”.

In his nightly address, Zelenskyy said Russian troops were about to launch “even larger operations” in the east of Ukraine.

“We are preparing for their actions. We will respond,” he said.

Residents have been fleeing in their thousands, but Lugansk governor Sergiy Gaiday said many were afraid to leave after a missile strike on a railway station in the city of Kramatorsk on Friday killed 57 people, according to a revised tally issued by local authorities. 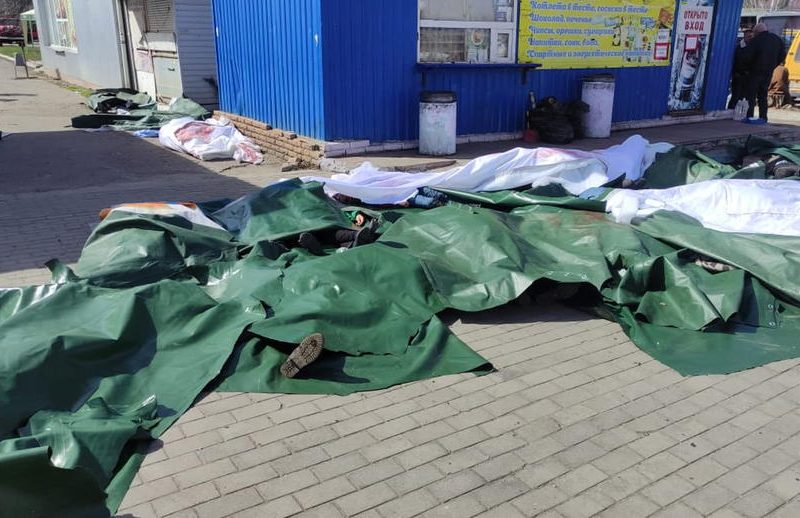 Ukrainian President Volodymyr Zelenskyy called for a “firm global response” Friday after a missile strike killed 52 people at a train station in eastern Ukraine where civilians had gathered to flee a feared Russian offensive.

“Sometimes we just beg (them) to come out of hiding because we know what comes next,” he said, adding Russian forces would “destroy everything in their path”.

Almost 50 wounded and elderly patients were transported from the east in a hospital train by medical charity Doctors Without Borders (MSF) over the weekend, the first such evacuation since the attack on the Kramatorsk station.

Electrician Evhen Perepelytsia was one of those evacuated after he lost his leg, and almost his life, to shelling in his hometown of Hirske in Lugansk.

“We hope that the worst is over — that after what I’ve been through, it will be better,” said 30-year-old after the train arrived in the western city of Lviv.

Russia’s defence ministry has denied carrying out the Kramatorsk attack.

It said Kyiv and its western allies were continuing to stage “monstrous and merciless” provocations and murdering civilians in the self-proclaimed Lugansk People’s Republic, one of two pro-Russian separatist statelets in Ukraine’s eastern Donbas.

Ukraine on Sunday hit out at the Kremlin and Russian media for laying the groundwork for war “for many years”.

But in an interview with NBC’s “Meet the Press”, Kuleba said he remained open to negotiating with the Russians.

“If sitting down with the Russians will help me to prevent at least one massacre like in Bucha, or at least another attack like in Kramatorsk, I have to take that opportunity,” he said.

Bucha — where authorities say hundreds were killed, some with their hands bound — has become a byword for the brutality allegedly inflicted under Russian occupation.

Ukraine’s prosecutor Venediktova said 1,222 bodies had been found there and in the broader region around Kyiv so far.

At least two corpses were found inside a manhole at a petrol station on a motorway outside Kyiv on Sunday, an AFP reporter saw.

The bodies appeared to be wearing a mix of civilian and military clothing.

A distraught woman peered into the manhole before breaking down, clawing at the earth and wailing, “My son, my son”.

The United Nations said on Sunday that 4,232 civilian casualties had been recorded in Ukraine to date, with 1,793 killed and 2,439 injured.

Austrian Chancellor Karl Nehammer said he would meet Putin on Monday, which would make him the first European leader to visit the Kremlin since the invasion began on 24 February.

Nehammer met the Ukrainian leader in Kyiv over the weekend, and his spokesman said he had informed Berlin, Brussels and Zelenskyy of the trip to Moscow.

Austria is a member of the European Union, but not of NATO.

EU foreign ministers will also meet Monday to discuss a sixth round of sanctions, even as divisions over a ban on Russia gas and oil imports threaten to blunt their impact.

In a bid to shore up international resolve against Moscow, US President Joe Biden is to hold virtual talks on Monday with Indian Prime Minister Narendra Modi, just weeks after saying India had been “shaky” in its response to the invasion. 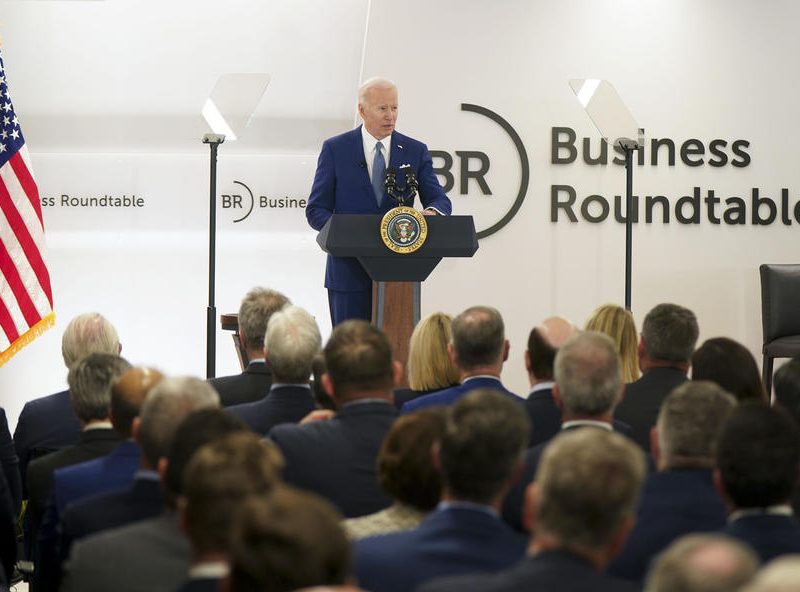 US President Joe Biden said Monday (21 March) that India was an exception among Washington’s allies with its “shaky” response to the Russian invasion of Ukraine.

A US spokeswoman said the two leaders would consult on ways to offset the “destabilizing impact (of the war) on global food supply and commodity markets”.

The World Bank on Sunday issued a dire forecast, saying Ukraine’s economy would collapse by 45.1% this year — a much bleaker outlook than it predicted even a month ago — while Russia would see an 11.2% decline in GDP.