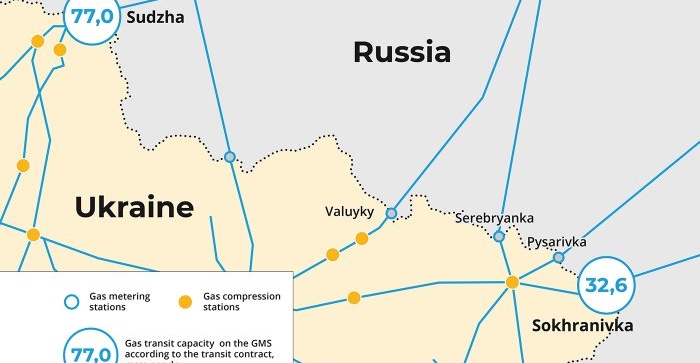 GTSOU, which operates Ukraine's gas system, said it would suspend flows via the Sokhranivka route and temporarily shift the affected flow elsewhere, to the Sudzha physical interconnection point located in territory controlled by Ukraine. [GTSOU website]

Ukraine said on Tuesday (10 May) it would suspend the flow of gas through a transit point which it said delivers almost a third of the fuel piped from Russia to Europe through Ukraine, blaming Moscow for the move and saying it would move the flows elsewhere.

GTSOU, which operates Ukraine’s gas system, said it would suspend flows via the Sokhranivka route from Wednesday, declaring “force majeure”, a clause invoked when a business is hit by something beyond its control.

The company said in a statement that it could not operate at the Novopskov gas compressor station due to “the interference of the occupying forces in technical processes”, adding that it could temporarily shift the affected flow elsewhere, to the Sudzha physical interconnection point located in territory controlled by Ukraine.

But Gazprom, which has a monopoly on Russian gas exports by pipeline, said it was “technologically impossible” to shift all volumes to the Sudzha interconnection point, as GTSOU proposed.

Ukraine has remained a major transit route for Russian gas to Europe even after Russia’s invasion on 24 February.

The Novopskov compressor station in the Luhansk region of eastern Ukraine has been occupied by Russian forces and separatist fighters since soon after Moscow began what it describes as a “special military operation”.

It is the first compressor in the Ukraine gas transit system in the Luhansk region, the transit route for around 32.6 million cubic metres of gas a day, or a third of the Russian gas which is piped to Europe through Ukraine, GTSOU said.

GTSOU said that in order to fulfill its “transit obligations to European partners in full” it would “temporarily transfer unavailable capacity” to the Sudzha interconnection point in territory which is controlled by Ukraine.

Gazprom said it had received notification from Ukraine that the country would stop the transit of gas to Europe via the Sokhranivka interconnector from 0700 local time on Wednesday.

The Russian company said it saw no proof of force majeure or obstacles to continuing as before. Gazprom added that it was meeting all obligations to buyers of gas in Europe.

The United States has urged countries to lessen their dependence on Russian energy and has banned Russian oil and other energy imports in retaliation for Moscow’s invasion of Ukraine.

US State Department spokesperson Ned Price said Tuesday’s announcement does not change the timeline to lessen global dependence on Russian oil “as soon as possible.”

He said Washington has been in close touch with partners around the world to increase energy supplies.