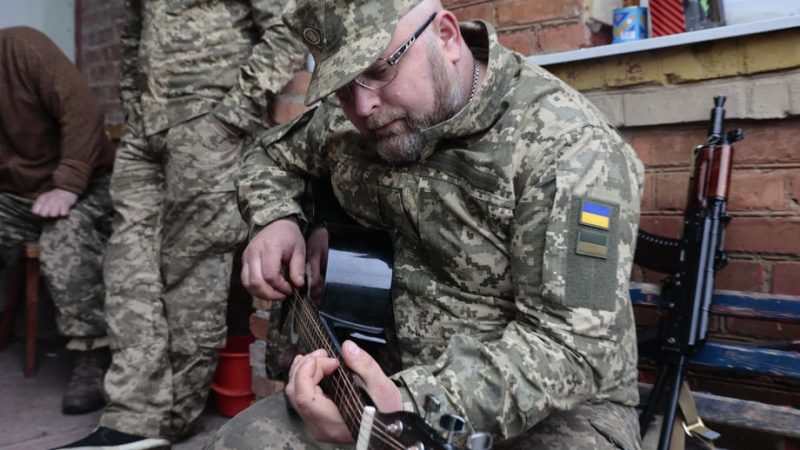 A Ukrainian serviceman plays guitar as he and his comrades rest close to their position near Kharkiv, Ukraine, 9 May 2022. [Stringer/EPA/EFE]

Invading Russian military forces remain bogged down in Ukraine and have shifted to a war of attrition, two senior US intelligence officials told Congress on Tuesday (10 May).

The next two months are expected to be intense fighting as Russian forces seek to press the war in eastern Ukraine after having abandoned a campaign targeting Kyiv and other major Ukrainian cities, the officials said.

Director of National Intelligence Avril Haines, testifying with the three-star general, also said Russian forces are struggling in efforts to take over Ukraine since the campaign began on 24 February and are regrouping to focus on battles in the eastern part of the country.

“The Russians met with more resistance from Ukraine than they expected and their own military performance revealed a number of significant internal challenges, forcing them to adjust their initial military objectives, fall back from Kyiv and focus on Donbas,”  Haines said.

Since Russia was forced to abandon an assault on the capital Kyiv at the end of March, its main force has been trying to encircle Ukrainian troops in the eastern Donbas region, using the city of Izyum near Kharkiv, in the northeast, as a base.

Ukrainian troops have mostly held out against assaults from three directions, leading to a military stalemate.

Putin appeared to be preparing for a long conflict, and a Russian victory in the Donbas region might not end the war, Haines said.

But the counterattack near Kharkiv could signal a new phase, with Ukraine going on the offensive and supply lines into Russia now potentially vulnerable.

President Volodymyr Zelenskyy said Ukrainian successes were gradually pushing Russian forces out of Kharkiv, which has been under bombardment since the war began.

“But I also want to urge all our people … not to spread excessive emotions. We should not create an atmosphere of excessive moral pressure, where victories are expected weekly and even daily,” Zelenskyy said in a video address.

In the villages of Staryi Saltiv and Vilkhivka near Kharkiv, Ukrainian servicemen gathered the bodies of Russian soldiers who were killed in the fighting, according to Reuters witnesses.

Apparently the Russian commanders didn’t bother collecting the bodies of their dead soldiers.

Russian forces were trying to prevent Ukrainian troops from moving further towards the border in the Kharkiv region and were trying to fully take over the town of Rubizhne, Ukraine’s general staff said early on Wednesday.

“Enemy aircraft twice launched non-guided missiles on border areas of Sumy. There were also two instances of mortar shelling in Chernihiv region,” they said on their Telegram channel.

In the south, Ukrainian armed forces said they struck nine enemy targets, with enemy losses of 79 servicemen and 12 pieces of equipment, including armoured vehicles and howitzers.

Russian fire was concentrated on the Mykolaiv region where private homes were damaged as well as farms and power lines to one town.

Russian forces continued to pummel the Azovstal steelworks in the southern port of Mariupol with artillery, tanks and aircraft bombing, Ukraine’s general staff said, trying to capture the last bastion of Ukrainian resistance in the ruined city.

Ukraine says tens of thousands of people have been killed in the city under two months of Russian siege, a number difficult to verify.

Scores of civilians have been evacuated from the steelworks in recent days, but an aide to Mariupol’s mayor, Petro Andryushchenko, said at least 100 remained inside.

The number of Ukrainians who have fled their country is approaching 6 million, according to the United Nations, which says the refugee crisis is the fastest growing since World War Two.

(With additional reporting and editing by Georgi Gotev)