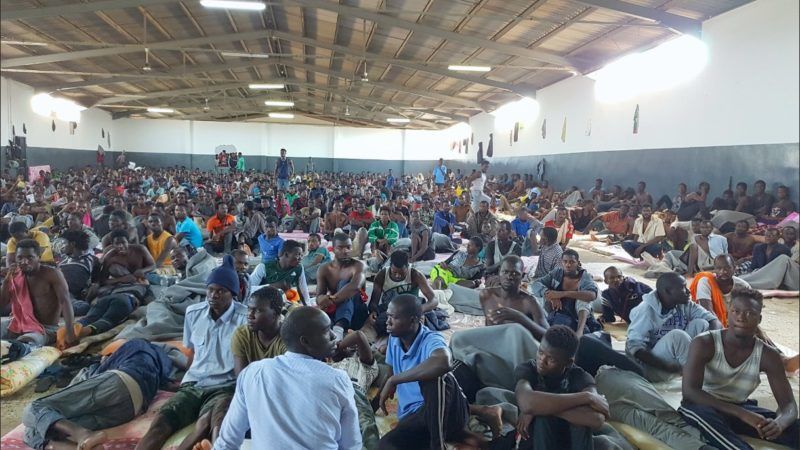 “The suffering of migrants detained in Libya is an outrage to the conscience of humanity,” UN human rights chief Zeid Ra’ad Al Hussein said in a statement.

The suffering of migrants detained in #Libya is an outrage to human conscience. The intl community cannot continue to turn a blind eye to the horrors endured by migrants & pretend that the situation can be remedied only by improving conditions in detention https://t.co/7AR1g3twi5 pic.twitter.com/aBDqbu0iZN

“The European Union’s policy of assisting the Libyan Coast Guard to intercept and return migrants in the Mediterranean (is) inhuman,” he said.

Chaos-ridden Libya has long been a major transit hub for migrants trying to reach Europe, and many of them have fallen prey to serious abuse there at the hands of traffickers and others.

Zeid warned on Tuesday that “the detention system for migrants in Libya is broken beyond repair”.

“The international community cannot continue to turn a blind eye to the unimaginable horrors endured by migrants in Libya, and pretend that the situation can be remedied only by improving conditions in detention.”

#Libya: The EU's efforts to intercept migrant boats are worsening – not reducing – the level of abuses suffered by migrants. During a recent visit to detention facilities, our Monitors were shocked by what they witnessed – #Zeid https://t.co/RV0j57XkKR pic.twitter.com/gp7QFuK7ay

According to Libya’s Department of Combatting Illegal Migration (DCIM), 19,900 people were being held in facilities under its control in early November, up from about 7,000 in mid-September.

The increase came after authorities detained thousands of migrants previously held by smugglers in Libya’s people-trafficking hub Sabratha, to the west of Tripoli.

Zeid said staff members had visited four DCIM facilities earlier this month and were “shocked” by what they saw.

There were “thousands of emaciated and traumatised men, women and children piled on top of each other, locked up in hangars with no access to the most basic necessities, and stripped of their human dignity”, he said.

Migrants, including children, described horrific beatings by guards at detention centres, while many women said they faced rape and other sexual violence at the hands of smugglers and guards.

One woman told UN staff she was gang-raped by three men, including a DCIM guard, while another woman said four armed men gang-raped her during her journey, when she was pregnant.

“I bled profusely, and I think I lost the baby. I haven’t seen a doctor yet,” she said.

The UN urged Libyan authorities to take concrete steps to halt violations and abuses in the detention centres, and to stop detaining migrants.

“The increasing interventions of the EU and its member states have done nothing so far to reduce the level of abuses suffered by migrants,” Zeid said, adding that instead there appeared to be “a fast deterioration in their situation in Libya”.

Zeid’s comments came after ministers from 13 European and African countries on Monday pledged to take steps to ease the crisis around the Mediterranean, especially to help improve conditions for migrants held in Libya.

At a meeting in Bern of the contact group on the crisis along the Central Mediterranean migration route, the ministers also reiterated a pledge to strengthen Libya’s coast guard.

Italy, with the support of the EU, has since the summer been training the Libyan coast guard to intercept boats as part of a controversial deal that has seen migrant arrivals to Italy down nearly 70% since July.

Reacting to Zeid’s charges, an EU spokesperson noted that Brussels was funding UN agencies on the ground in Libya working to protect migrants.

“We believe that the detention centres in Libya must be closed. The situation in these camps is unacceptable,” the spokesperson said in a statement sent to AFP.

The EU wants to see that rescued migrants are brought “to reception centres that meet international humanitarian standards”, the spokesman said, while at the same time improving the Libyan Coast Guard’s capacity to prevent deaths at sea.

But the UN rights office criticised European countries for ignoring warnings that the deal with Libya could condemn more migrants to detention, exposing them to torture, rape, forced labour and extortion.

“We cannot be a silent witness to modern day slavery, rape and other sexual violence, and unlawful killings in the name of managing migration and preventing desperate and traumatised people from reaching Europe’s shores,” Zeid said.

The Libyan coastguard on Tuesday called for more European aid for its “obsolete” fleet, warning it would not otherwise be able to rescue migrants in the Mediterranean in 2018.

Colonel Abu Ajila Abdelbarri of the Libyan coastguard said that by the start of next year’s migration season in spring, “we will not be able to carry out search and rescue missions” in Libya’s coastal waters.

Abdelbarri said the coastguard needed European backers “to provide us with ships and especially to repair the ones we have”.

“We are extending our hands to countries, and not to NGOs whose agendas we do not know,” he said.

“We call on Europe to cooperate with the Navy and support it.”

There are frequent tensions between NGOs running search and rescue operations off Libya and the coastguard, which has an agreement with Italy to stem the flow of departures.

Five migrants including a young child died last week as result of a “violent, reckless” and “illegal” intervention by Libya’s coastguard in a rescue in international waters, a German charity group said.

Libya's coastguard has just deliberately left *50 migrants* to die at sea while standing in the way of German NGO, and despite screaming from Italian helicopter monitoring the scene
https://t.co/v3JYNZgbEL https://t.co/YWdNpHWLql

Sea Watch, one of several NGOs which operate search-and-rescue boats in the Mediterranean, said the lives had been lost needlessly because of heavy handed tactics of a coastguard being trained and financed by the European Union.

The Libyan coastguard in turn accused Sea Watch of causing “panic and confusion” among the migrants.

According to the latest figures from the International Organization for Migration, published on Tuesday, about 157,000 migrants and refugees arrived in Europe by sea since 1 January, 75% of them landing in Italy. Nearly 3,000 died attempting the perilous sea crossing.

I share UN concerns over human rights violations in Libya. We must protect the dignity of all human beings, tackle the root causes of migration with a Marshall Plan for Africa & stabilise the region speaking with one voice. EP plans to send a delegation to Libya 16 -22 December