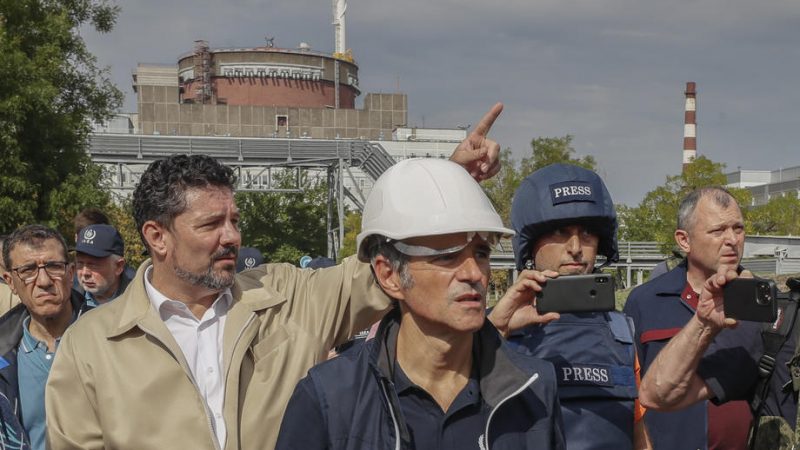 United Nations nuclear experts who crossed into Russian-held territory in Ukraine to assess the safety of Europe’s biggest atomic energy plant were seeking on Friday (2 September) to assess physical damage to the facility, where both sides warn of possible disaster.

An International Atomic Energy Agency (IAEA) inspection team braved intense shelling to reach the Zaporizhzhia nuclear power plant on Thursday. Russia and Ukraine say they fear a Chernobyl-like catastrophe due to shelling they blame on each other.

Russia seized the plant early in the now more than six-month-old war, and areas to the south are now the focus of a major Ukrainian counter-offensive. Kyiv accuses Moscow of using the facility to shield its forces, a charge Moscow denies while rejecting calls to withdraw troops.

After touring the plant on Thursday, IAEA chief Rafael Grossi said his inspectors were “not going anywhere”. Grossi and other members of the team left for Ukrainian-held territory but five IAEA inspectors remain at the plant, Ukraine’s state nuclear company says.

The inspectors will assess physical damage to the plant, ensure its safety and security systems are functional and evaluate the conditions of the facility’s staff, the IAEA says. Grossi said on Thursday they would produce a report on their findings.

Since its capture by Russia in March, the plant has been controlled by Russian troops but operated by Ukrainian staff. On Thursday, one of its reactors was forced to shut down due to shelling.

In a video address late on Thursday, Ukrainian President Volodymyr Zelenskyy reiterated his frequent calls that all troops be removed from the plant — a demand supported by Kyiv’s Western allies and the United Nations.

“The main thing that must happen is the demilitarisation of the station’s territory,” Zelenskyy said. “Demilitarisation and full control of Ukrainian nuclear workers.”

Russian Foreign Minister Sergei Lavrov said on Thursday Moscow was doing everything to ensure that the plant could operate safely, and for the IAEA inspectors to be able to complete their tasks.

Ukrainian Energy Minister German Galushchenko said on Thursday it was being discussed that certain IAEA specialists — “up to two individuals” — will be permanently stationed at the plant.

The plant sits on the south bank of a huge reservoir on the Dnipro River that divides Russian and Ukrainian forces in central southern Ukraine. Before the war, it supplied more than a fifth of Ukraine’s electricity.

Ukrainian officials have welcomed the IAEA visit, expressing hope that it will lead to the demilitarisation of the plant.

Russian-installed officials have suggested the IAEA team would have only a day to inspect the plant, while the nuclear watchdog’s team has prepared for longer.

The head of the International Committee of the Red Cross called for all fighting near the plant to stop, warning that little could be done to respond in the event of a potential nuclear leak.

“(It) will be difficult if not impossible to provide humanitarian assistance … and this is why fighting should stop,” Robert Mardini told a news conference during a visit to Ukraine on Thursday.

Ukraine has launched an offensive in recent days to recapture territory in southern Ukraine, mainly further down the Dnipro in neighbouring Kherson province.

Both sides have claimed battlefield successes in the new Ukrainian push to recapture territory in the south, although details have been scarce so far, with Ukrainian officials releasing little information about their advance.

“It is a very slow process, because we value people,” said Oleksiy Arestovych, an adviser to Zelenskyy. Moscow has denied reports of Ukrainian progress and said its troops had routed Ukrainian forces.

Reuters could not independently verify those claims.

Ukraine’s military said late on Thursday that Russian forces had shelled around a dozen southern towns, with attacks in other regions including Kharkiv in the north and Donetsk in the east.

Millions of people have fled Ukraine, thousands have been killed and cities have been reduced to rubble in what Kyiv and the West call Russia’s unprovoked war of aggression.