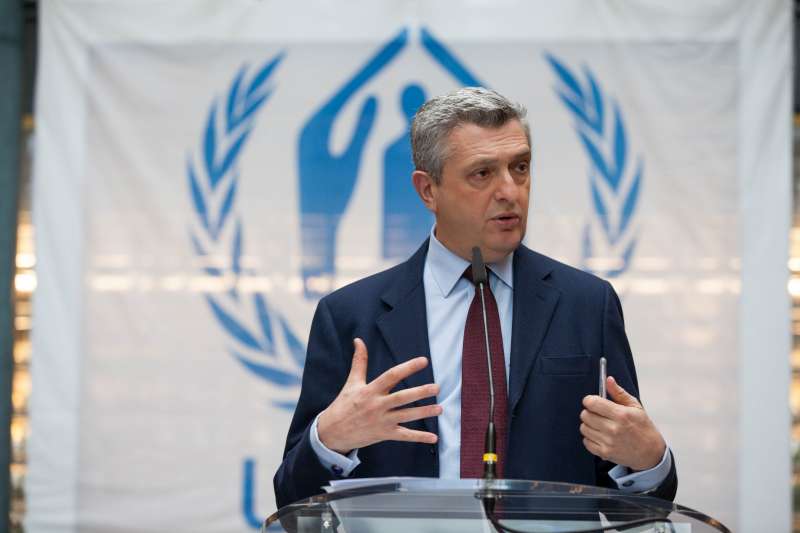 The UN’s refugee chief says a worrying “climate of xenophobia” has taken hold in Europe as the continent struggles with the biggest influx of migrants since World War II.

Speaking to AFP in Tehran at the start of a regional tour, UN High Commissioner for Refugees Filippo Grandi said European leaders needed to do more to coordinate migration policies and to combat negative stereotypes about refugees.

“Refugees… don’t bring danger to us, they flee from dangerous places,” said Grandi, who took office in January.

National leaders need to better explain that immigration “in fact contributes to the development of societies”. he said.

“Those who do the opposite, who stir up public opinion against refugees and migrants, have a responsibility in creating a climate of xenophobia that is very worrying in today’s Europe,” he said.

“It provides a negative example to countries further away.”

Protracted conflicts – in particular Syria’s five-year civil war – have prompted an unprecedented wave of migration to the continent, with a record 1.25 million Syrian, Iraqi, Afghan and other migrants entering Europe since January 2015.

The influx has sparked a backlash in some countries, including in Austria, where the anti-immigration Freedom Party nearly won the presidency last month and in Hungary where authorities have sealed the border with Serbia with razor wire and made illegal border crossing a criminal offence punishable by jail.

Grandi said it was unfortunate that decisions taken last year by the European Union to better handle the influx “were not implemented”.

It was, he said, “a missed opportunity” because “each country made decisions separately. Borders closed.”

He called for “a more collective collegial system of managing refugee flows based on solidarity and burden-sharing between the states, as opposed to trying to do it by themselves with the result that only some countries receive a large number of refugees and others close the borders”.

Grandi also called for greater efforts to help those displaced by conflict within their own countries.

“Two-thirds of the world’s displaced are displaced internally,” he said.

“We have millions of them in Afghanistan, in Syria, in Iraq, in Yemen… they are the most difficult to reach because they are usually in the midst of wars therefore it’s dangerous to bring assistance.”

Grandi, an Italian diplomat long active in UN humanitarian work, was due in Afghanistan on Monday to mark World Refugee Day. He said he wanted to use his first year in office to highlight the plight of that country’s refugees.

“The Afghan refugee crisis has been unfortunately forgotten repeatedly in its history,” he said.

It “only gets remembered when something big happens like September 11 and now the arrival of Afghans in Europe among hundred of thousands others.”

The root cause is instability in Afghanistan, he said, adding: “That’s why my first message here is let’s make peace in Afghanistan.”

Iran hosts more than three million immigrants from neighbouring Afghanistan, a million of them legally.

“The space given to the refugees for assistance, to give them opportunities and protection, is considerable” he said,

He pointed to a decree from Iran’s supreme leader Ayatollah Ali Khamenei last year allowing all Afghan children to be allowed into schools in the Islamic republic.

“There are things that have been done here in Iran that are truly examples for other countries, like giving access for children to the school system,” Grandi said.

It was “one of the most important gestures that any country has expressed for refugees anywhere in the world in the past few years”.

The UNHCR warned of a “collective failure” by the international community to deliver on pledges made to help the countries which bear the heaviest burden of the Syrian refugee crisis.