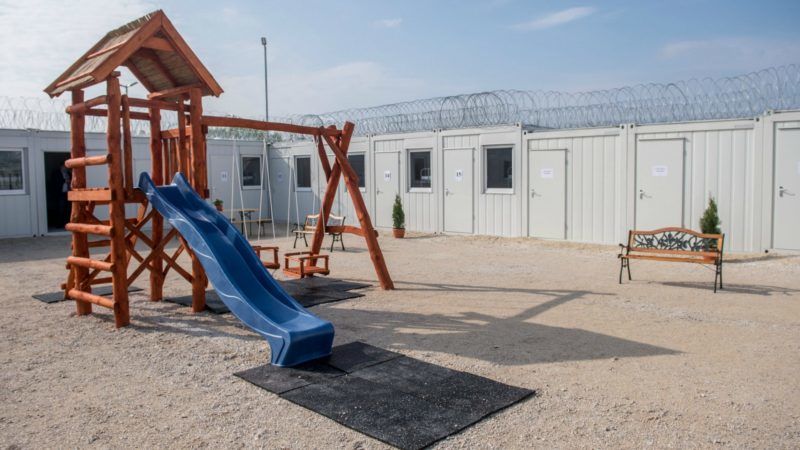 A child's playground is seen inside the enlarged barbed wire transit zone set up for migrants at the Hungary's southern border with Serbia near Tompa, 169 km southeast of Budapest, Hungary, 6 April 2017. [EPA/Sandor Ujvari]

European countries must stop returning asylum seekers to Hungary because of deteriorating conditions there for new arrivals, including children, and allegations of abuse, the United Nations said yesterday (10 April).

The situation for asylum seekers and other migrants has long been considered dire in Hungary but it has worsened since Budapest last month introduced a new law on the systematic detention of all asylum seekers.

Hungary 'ready to detain all migrants'

“I urge states to suspend any Dublin transfer of asylum-seekers to this country until the Hungarian authorities bring their practices and policies in line with European and international law,” said UN High Commissioner for Refugees, Filippo Grandi.

The so-called Dublin Regulation, which aims to stop people making asylum claims in multiple countries by requiring asylum seekers to be sent back to the first European country they arrived in, applies to EU nations as well as non-members Switzerland and Norway.

Hungary already rejects most requests from European countries for transfers under the Dublin system, arguing that most migrants who pass through the country first came through Greece.

According to the Hungarian branch of the Helsinki Committee rights group, Hungary received 26,998 requests last year but took back only 513 asylum seekers under the Dublin agreement.

Grandi said he was “encouraged” by a European Commission decision to work with Hungarian authorities in a bid to bring Budapest’s practices in line with EU law, but stressed in a statement that “urgent measures are needed to improve access to asylum in Hungary.”

The UN refugee agency has repeatedly cautioned that Hungary’s use of physical barriers and restrictive policies basically deny the access to asylum guaranteed under international law.

Hungary claims it was forced to build border fence

Physical barriers are the only way Hungary can secure its borders, according to the country’s Minister for Foreign Affairs, Péter Szijjártó, and Budapest still maintains its opposition to refugee distribution quotas. EURACTIV Germany reports.

Since Hungary’s new law came into force on 28 March, all new asylum seekers, including children, have been “detained in shipping containers surrounded by high razor fences at the border for the entire length of their asylum procedures,” the UNHCR said.

According to the government 324 shipping container homes have been installed at two separate locations called “transit zones” built into a fence that Hungary erected along the 175 km border in 2015.

UNHCR warned last month that the new practice would “have a terrible physical and psychological impact on women, children and men who have already greatly suffered.”

As of last Friday, 110 people, including four unaccompanied children and children with their families, were being held there, UNHCR said.

EU member Hungary previously systematically detained all asylum applicants but suspended the practise in 2013 under pressure from Brussels, the UN refugee agency and the European Court of Human Rights.

But he said: “We remain very concerned about highly disturbing reports of serious incidents of ill-treatment and violence against people crossing the border into Hungary, including by state agents.

“These unacceptable practices must be brought to an end and I urge the Hungarian authorities to further investigate any allegation of abuse and violence,” he added.

“The government deliberately dismantles the asylum-rule system in Hungary, and by doing so puts refugees at risk,” Gabor Gyulai of the Hungarian Helsinki Committee told AFP.

“This is not worthy of a European country and EU member.”