‘Unprovoked and unjustified:’ World reacts to attack on Ukraine 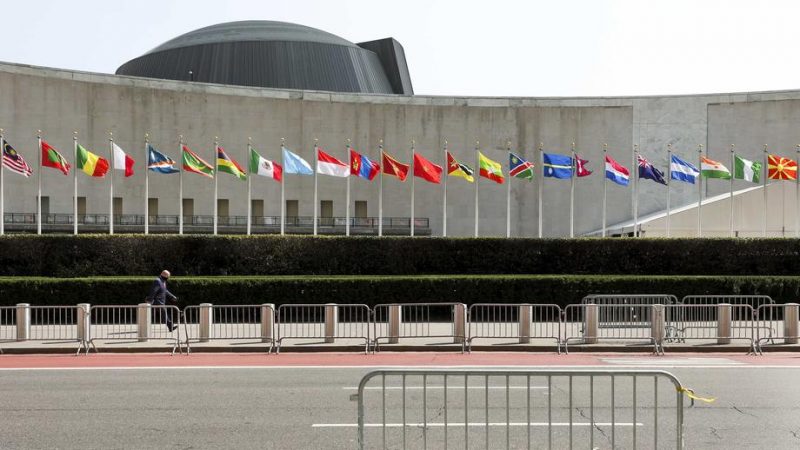 World leaders on Thursday (24 February) swiftly condemned Russia’s military attack on Ukraine, with Western capitals vowing to escalate sanctions against Moscow while the head of the United Nations demanded the conflict end immediately.

US President Joe Biden
“The prayers of the entire world are with the people of Ukraine tonight as they suffer an unprovoked and unjustified attack by Russian military forces,” the US president said shortly after the operation began.

He warned “Russia alone is responsible for the death and destruction this attack will bring.”

“The world will hold Russia accountable,” he declared.

Guterres made a direct and personal plea to Russian President Vladimir Putin after an emergency Security Council session, urging him to stop the attack “in the name of humanity.”

“In the name of humanity, do not allow to start in Europe what could be the worst war since the beginning of the century,” he said.

“The conflict must stop now,” added the UN chief, who said it was the “saddest day” of his tenure.

The Atlantic alliance’s secretary general said Russia had “chosen the path of aggression against a sovereign and independent country.”

The attack “puts at risk countless civilian lives,” Stoltenberg said in a statement, describing it as a “grave breach of international law, and a serious threat to Euro-Atlantic security.”

NATO ambassadors are to hold an emergency meeting on Thursday morning European time to discuss the attack.

“I am appalled by the horrific events in Ukraine and I have spoken to President (Volodymyr) Zelenskiy to discuss next steps,” the British leader tweeted.

“President Putin has chosen a path of bloodshed and destruction by launching this unprovoked attack on Ukraine. The UK and our allies will respond decisively.”

“In these dark hours, our thoughts are with Ukraine and the innocent women, men and children as they face this unprovoked attack and fear for their lives,” EU chiefs Ursula von der Leyen and Charles Michel said on Twitter.

“We will hold the Kremlin accountable.”

The German leader lashed out at an “unscrupulous act” by Putin and spoke to Zelenskiy to express his country’s “full solidarity.”

Foreign Minister Annalena Baerbock warned the world “will not forget this day of shame.”

“This attack will have severe political and economic consequences for Russia,” Economy and Climate Minister Robert Habeck said.

“Russia must immediately put an end to its military operations,” Macron wrote on Twitter, saying Russia had made the decision to “wage war” on Ukraine.

“France stands in solidarity with Ukraine. It stands by Ukrainians and is working with its partners and allies to end the war,” he added.

“These unprovoked actions are a clear further violation of Ukraine’s sovereignty and territorial integrity, and of Russia’s obligations under international law and the Charter of the UN,” Trudeau said in a statement.

He said he would meet with partners from the Group of Seven to shape a collective response, “including by imposing sanctions additional to those announced earlier this week.”

“These reckless and dangerous acts will not go unpunished.”

“The latest Russian invasion shakes the foundation of the international order, which does not permit unilateral attempts to change the status quo,” Japan’s leader said after a meeting of his national security council.

The Organization for Security and Co-operation in Europe (OSCE), of which Russia is a member, said “this attack on Ukraine puts the lives of millions of people at grave risk and is a gross breach of international law and Russia’s commitments.”

During the charged UN emergency meeting, the Ukraine’s ambassador Sergiy Kyslytsya implored the council, chaired by Russia to “do everything possible to stop the war”.

He demanded that Russia’s ambassador relinquish his duties as chair.
“There is no purgatory for war criminals. They go straight to hell, ambassador,” the visibly emotional Kyslytsya said.