US Congressman: No EU-US relations without Russia 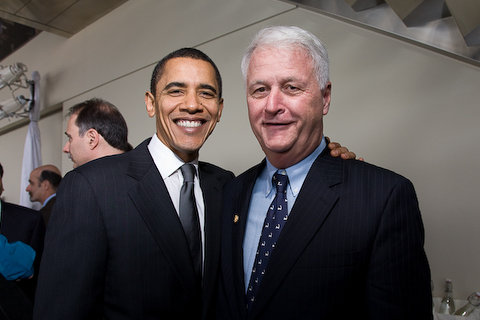 The EU and the US need to strengthen the transatlantic relationship, forge a partnership that incorporates Russia, and understand that Moscow is a key player in terms of their security and the direction in which the global community is heading, US Congressman Bill Delahunt told EURACTIV in an interview held in his Washington office.

Delahunt, who chairs the foreign affairs subcommittee on Europe in the US Congress, stressed the many opportunities to develop closer ties with Russia.

"They need to be encouraged to adopt the values that we largely share. I can understand the concerns that Eastern European countries of the former Soviet bloc have – but we have to allay those concerns and bring Russia in, with Europe using its soft power," stressed Delahunt.

The Congressman underlined the need for a stronger and strengthened European Union. "We have to examine Europe in the context of what has occurred since Robert Schuman," he said. "In a historical sense it has been a transformation," he added, without attempting to hide his frustration over the "jockeying and uncertainty" among EU member states.

Delahunt, like many of his colleagues in the European Parliament, is backing a revival of the EU-US relationship pushed by stronger ties between lawmakers. He has been advocating a presence for Congress in Brussels, but he admits "that will take a couple of years" to see the light of day.

A US Congress office in Brussels is "what I would label a no-brainer: it would be an excellent investment of resources, because it would clearly keep the US Congress more educated about Europe and vice-versa," Delahunt underlined, stressing that both houses could benefit from better communication and ongoing engagement with one another.

Simply relying on ad-hoc visiting delegations, although a positive sign, is not enough, according to the congressman. "We need a continuing presence," he added.

Delahunt is one of Washington's lawmakers who think the centrepiece of the future of US foreign policy starts with a strong transatlantic relationship. Explaining his view, the Massachusetts congressman quoted a European leader as saying "think globally, act transatlantic".

"We have to be patient and look in the rear-view mirror to see what has occurred over time. Are there going to be disagreements? Yes," he pointed out.

Russia should be part of the picture. "I think we have to implicate Russia, so that Russia continues to become a part of that other piece" of transatlantic relations, Delahunt stressed, dismissing talks on G2s with China or other countries.

Indeed, NATO Secretary-General Anders Fogh Rasmussen recently said that Europe needed a missile-defence system that includes not just all NATO countries, but Russia, too. Such a security roof would be a strong political symbol that Russia is fully part of the Euro-Atlantic family, sharing the costs and benefits, he argued.