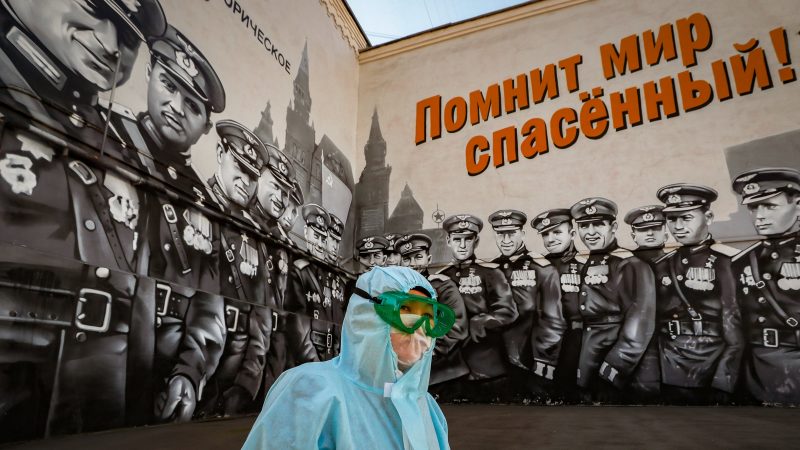 A woman wearing protective gear walks in front of a huge graffiti dedicated to the victory in World War II with an inscription reading 'The world saved remembers' amid the ongoing coronavirus COVID-19 pandemic in Moscow, Russia, 2 May 2020. [Yuri Kochetkov/EPA/EFE]

US Secretary of State Mike Pompeo and nine Central and Eastern European foreign ministers took a swipe at Russia on Thursday (7 May), denouncing what they described as “a regrettable effort to falsify history”.

The officials released the joint statement ahead of the 75th anniversary of the end of World War II to honour the victims and “all soldiers who fought to defeat Nazi Germany”.

But they also used the occasion to recall that May 1945 “did not bring freedom to all of Europe” as the then Soviet Union imposed communist rule in Eastern Europe.

“The Baltic States were illegally occupied and annexed and the iron grip over the other captive nations was enforced by the Soviet Union using overwhelming military force, repression, and ideological control,” said Pompeo and nine ministers from NATO’s eastern flank.

“Manipulating the historical events that led to the Second World War and to the division of Europe in the aftermath of the war constitutes a regrettable effort to falsify history.”

The statement was released by Bulgaria, the Czech Republic, Estonia, Hungary, Latvia, Lithuania, Poland, Romania, Slovakia and the United States.

President Vladimir Putin and other senior Russian officials recently accused Poland of bearing some responsibility for the outbreak of the war, a claim rejected by Warsaw and its Western allies as false revisionism.

On several occasions Moscow has attempted to downplay the secret 1939 Nazi-Soviet pact that was concluded before the start of WWII to carve up Europe.

Russia also refuses to recognise the 1944-45 Soviet takeover of the Baltic states Estonia, Latvia and Lithuania as an occupation, and it has never offered an apology or reparations.

The Baltic presidents also released their own statement Thursday challenging Moscow’s view of history and called for “truth and justice” in recognising communist-era crimes and Moscow’s responsibility for the war’s outbreak.

Estonian President Kersti Kaljulaid told AFP that the trio released the statement because “during the last year we have noticed the Russian Federation’s tendency to try to rethink or reanalyse or rewrite, even, history.”

“We cannot afford it. It is important to remember how things really were.”

Her Latvian counterpart, Egils Levits, said “the falsification of history is a kind of hybrid war” waged by Moscow.

While 9 May is celebrated as Victory Day in Russia, for many in the Baltic states it marks the start of decades of often brutal Soviet occupation rather than liberation.

The Baltic trio regained independence from the crumbling Soviet Union in 1990-1991, before joining the European Union and NATO in 2004 and relations with Russia have been strained ever since.

“For us, the war ended in 1993 when the last Russian soldier left,” Lithuanian President Gitanas Nauseda told AFP.