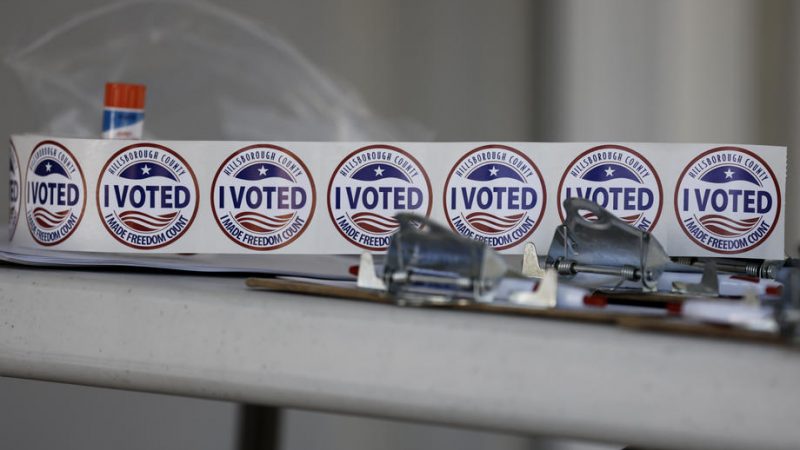 The US election remains tight in key swing states that will determine the results. [EPA-EFE | Peter Foley]

America’s unexpectedly tight presidential election will come down to seven swing states – Pennsylvania, Michigan, Wisconsin, Arizona, Nevada, North Carolina and Georgia – where results are still expected. Here’s how much longer it will take.

Democrat challenger Joe Biden won the states of Wisconsin and Michigan, pick-ups for Democrats from 2016, and has led in Arizona and Nevada, while President Donald Trump has an advantage in North Carolina, Georgia and Pennsylvania.

If Biden wins the states where he is currently leading, he will reach 270 electoral votes, the exact threshold to win the White House.

Following his victory claim on election night before all of the votes were counted, Trump and his campaign tried to stoke unfounded claims of voter fraud and prevent votes from being counted in states where Biden leads or could gain an edge, namely Pennsylvania and Michigan.

He demanded votes in Arizona, where he is behind, continue to be counted.

However, some of the races in these states could remain too close to call as of Thursday.

In Wisconsin and Michigan, Trump started with an early lead as in-person voting broke his way across both of those states.

However, given the election rules in these states, officials were not allowed to start counting mail-in ballots and the early vote until Election Day, leaving a backlog of votes that heavily favoured Democrats.

Thus, over the course of election night and Wednesday, Biden slowly came back as these votes, as well as those from those states’ metropolitan areas, were counted.

On Wednesday evening CET, CNN was the first outlet to call the state of Wisconsin for Biden with AP going soon after. Biden has a lead of a little over 21,000 votes, with a margin of 49.4% to 48.8%.

The Trump campaign has said they will demand a recount, which he is entitled to since the margin is less than 1% although the campaign will have to pay for it. In the previous presidential election, which also required a recount, Trump only gained 131 votes during Wisconsin’s recount.

A few hours later, they also called the race in Michigan for Biden by a margin of 38,000 votes.

This came after President Trump’s team announced they were filing a suit to stop counting the ballots in the state, claiming that they did not have adequate access to observe ballot counting.

Experts have said that the only grounds to stop counting legally cast ballots is if there is reason to suspect ‘irregularities,’ which Michigan election officials have stated is not the case. Michigan continued to count its ballots even after the campaign’s announcement.

By Wednesday morning, Trump had a 500,000 vote lead in Pennsylvania, but the state still has to count its 1.4 million mail-in ballots. Given the Democratic advantage among absentee voters, this could be enough for Biden to catch up, but the state has said they will not have final tallies until Friday or Thursday at the earliest.

Here too, the President tried to prematurely claim victory and throw out mail-in ballots. His press speaker Kayleigh McEnany told Fox News the Trump team would go to the Supreme Court to challenge ballots that were cast on or before 3 November but did not arrive until after the election, despite the state’s rules to accept ballots arriving up to three days after the election.

Trump has more solid leads in both Georgia and North Carolina. The best chances for the President is to win the state of North Carolina, where he has a lead of 77,000. Some votes in the state’s more Democratic cities are still outstanding, but experts believe it is unlikely to be enough for Biden.

Biden has a slightly better chance in the state of Georgia, where officials still have to count the votes in the districts around Atlanta. Trump currently has about a 31,000 vote lead, a number that has narrowed over the course of the day on Wednesday.

With current leads for Biden, the final two states up for grabs are Arizona and Nevada, a state that Hillary Clinton handily won in 2016.

While the AP had called Arizona relatively early, many other outlets like the New York Times and CNN have yet to project a winner in the race. Since the AP’s projection, Biden has maintained a solid albeit shrinking margin.

As of Thursday morning (European time), this lead was 50.7% to 47.9%. Votes in the state’s largest district of Maricopa County, which includes the city of Phoenix, are still outstanding, but the tallied results there have shown a solid lead for Biden.

Margins are tight in Nevada, where Biden has a slim lead of 8,000 votes. Officials are still tallying votes for all counties across the state, but Clark County, which includes Las Vegas and makes up around 70% of the state’s voting population, could put Biden over the top.

That state’s election officials have said that they will not release any more results there until Thursday.