US, EU concerned by China’s ‘problematic and unilateral actions’ at sea 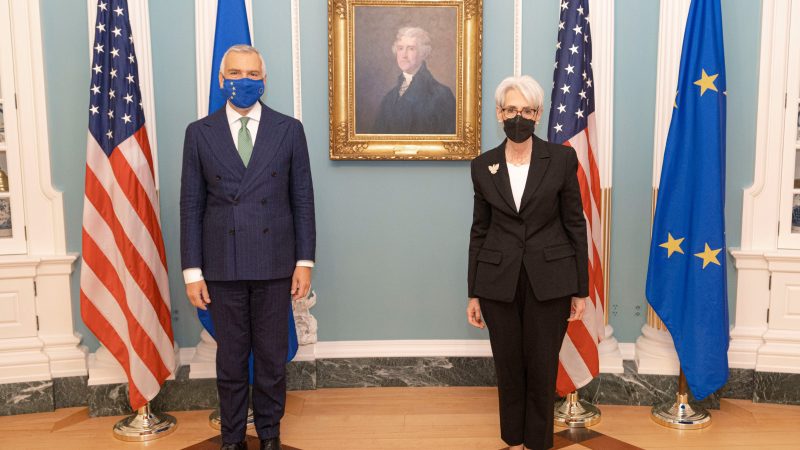 The United States and European Union on Thursday (2 December) voiced strong concern at China’s “problematic and unilateral actions” in the South China Sea and stressed the need for close contact to manage “competition and systemic rivalry” with Beijing.

The joint statement followed talks in Washington between US Deputy Secretary of State Wendy Sherman and the Secretary General of the European External Action Service, Stefano Sannino.

The complexity of our respective relationships with the PRC only underscores the importance of the United States’ continued consultation and coordination with the #EU. That is the purpose of our dialogue on China and our ongoing work as partners. https://t.co/pLbsV2c2Zd pic.twitter.com/jAZNKllOgw

It “emphasized the importance of the United States and EU maintaining continuous and close contacts on our respective approaches as we invest and grow our economies, cooperate with China where possible, and manage our competition and systemic rivalry with China responsibly.”

The statement also said the two sides discussed rights abuses in China, including repression of religious minorities in Xinjiang and Tibet and the erosion of autonomy in Hong Kong. It said they expressed readiness to deepen US-EU information sharing on disinformation sponsored or supported by China.

“They expressed strong concern over China’s problematic and unilateral actions in the South and East China Seas and the Taiwan Strait that undermine peace and security in the region and have a direct impact on the security and prosperity of both the United States and European Union,” the statement added.

The statement followed the second meeting of the US-EU Dialogue on China established this year. Sherman and Sannino are due to continue China-related discussions with high-level consultations on the Indo-Pacific on Friday.

US President Joe Biden has stressed the importance of working closely with allies in pushing back against China’s growing power and increasingly assertive behavior worldwide.

A US official briefing ahead of the talks said Washington and Brussels have an “increasingly convergent” view of China’s “concerning behavior.”

Blejean told the Center for Strategic and International Studies that France was a Pacific power and there was also interest in the region on the part of other EU members Germany, the Netherlands and Denmark, as well as former EU state Britain.

“We have to look at how we message that together, because when we’re all united the power of the message is stronger, and how we interact with like-minded nations doing the same – Australia, the United States, Japan, ASEAN countries and so on.”

Blejean said the EU could look at establishing a “Maritime Area of Interest” in the South China Sea after a pilot project aimed at better coordinating the maritime presence of EU member states underway in Africa’s Gulf of Guinea and another being looked at in the northern Indian Ocean.