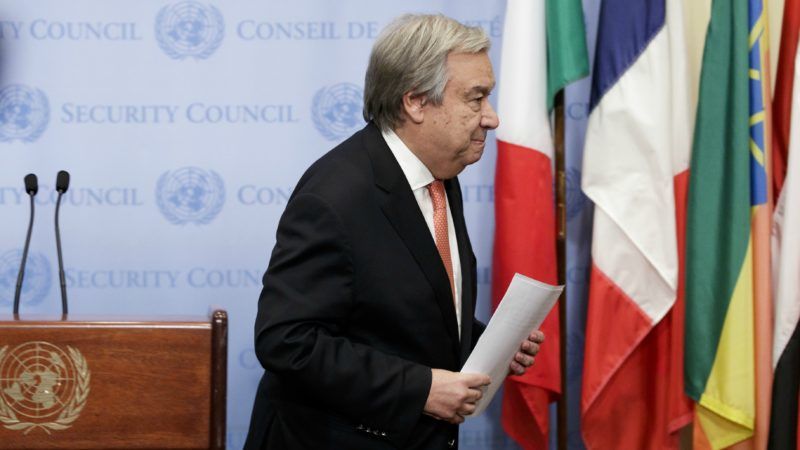 The United States is seeking a $250 million cut to the core budget of the United Nations for 2018-2019, on top of $200 million in savings already proposed by UN Secretary-General António Guterres, diplomats said on Tuesday (12 December). The EU also asked for cuts to the tune of $170 million.

The budget is under negotiations in a General Assembly committee, which is expected to adopt it before the end of December.

Two diplomats told AFP that the United States had put forward a proposal for an additional $250 million reduction – a 5% cut that another diplomat said would be nearly impossible to achieve.

The United States is the UN’s number one financial contributor, providing 22% of the core budget.

Diplomats said the proposed US budget cuts could target political missions in Libya and Afghanistan as well as the office for Palestinian rights and communication services.

UN budget must be cut by US$250m, or 5%, says US' Trump. Cuts would affect peacekeeping missions holding back mayhem in Central Africa Republic, DRC and elsewhere in Africa. pic.twitter.com/ioHWhfZ4qg

There was no immediate UN reaction and the EU mission to the United Nations declined to comment.

The European Union has also put forward a proposal to seek an additional $170 million in savings from the budget.

“This is a classic game,” said one diplomat. “There’s always two camps – the United States and the European Union – who want to reduce the budget and the rest of the countries who don’t.”

The UN’s operating budget is separate from its peacekeeping budget, which was cut by $600 million this year, under pressure from the US administration of President Donald Trump.

The dynamics of #peacekeeping budget cuts: The case of #MONUSCO: https://t.co/TkHGWG2KzC | Via @ipinstGO pic.twitter.com/zYSwUOOcsJ

The push for deeper cuts comes as Guterres is trying to build support for his plans for  a reform of the UN bureaucracy.

During a meeting held on the sidelines of the annual General Assembly debate in September, Trump said the United Nations had failed to reach its “full potential due to bureaucracy and mismanagement.”

“We are not seeing the results in line with this investment,” he said then.

One response to “US, EU want cuts to UN budget”