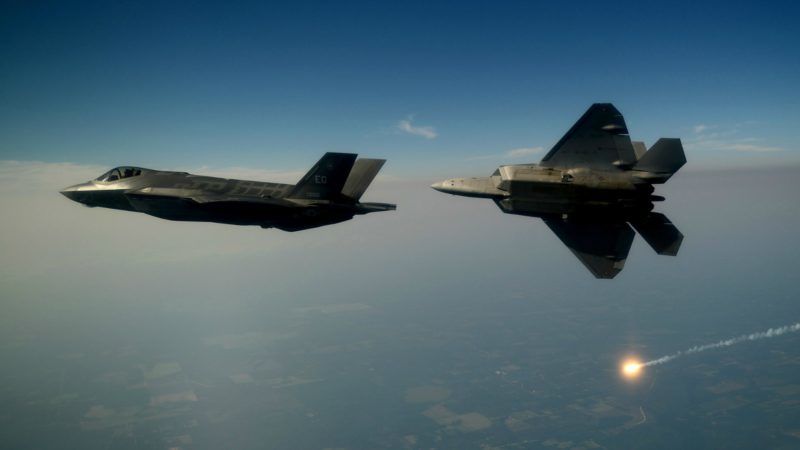 An F-35A Lightning II joint strike fighter and an F-22A Raptor soar over the Emerald Coast, in September 2012. This was the first time the two fifth-generation fighters flew together. [Wright-Patterson Air Force Base/USAF]

The visit of the F-35 stealth fighters, which flew from Britain and spent several hours in Estonia, is part of broader US jet pilot training across Europe as the NATO alliance seeks to deter Moscow from any possible incursion in the Baltics.

Russia denies having any such intention.

“This is a very clear message,” Estonia’s Defence Minister Margus Tsahkna told Reuters. “The United States is taking the show of unity very seriously,” he said of the jets that are designed to avoid detection by conventional radar.

The deployment of NATO troops and equipment, as well as strong words of support from senior US officials, have helped to reassure Baltic leaders who had been worried about US President Donald Trump’s commitment to defending Europe.

A US-led battalion of more than 1,100 soldiers will be deployed in Poland from the start of April, a US commander said on Monday, as the alliance sets up a new force in response to Moscow’s 2014 annexation of Crimea.

In last year’s election campaign, Trump voiced admiration for Russian President Vladimir Putin, and contacts between his aides and Russia before and after the November vote prompted concerns in Europe that Trump would seek a deal with Moscow.

Trump also described NATO as “obsolete”, though as president he has expressed support for the alliance.

Earlier this month, the US Air Force said a small number of Lockheed Martin Corp F-35A jets, one of the smaller, lighter variants of the fighters, would come to Europe for several weeks of training with other NATO military aircraft.

“The significance is the demonstration of how NATO is seeking to evolve and develop it air power capabilities,” said Stuart Evans, deputy commander of NATO’s Allied Air Command (AIRCOM) at Ramstein Air Base.

F-35s are in use by the US Air Force, Marine Corps and Navy, and by six other countries: Australia, Britain, Norway, Italy, the Netherlands and Israel. Japan took delivery of its first jet in December.

Estonia and its Baltic neighbours Lithuania and Latvia are former parts of the Soviet Union and today are members of NATO.

They requested greater NATO support following Moscow’s annexation of Ukraine’s Crimea peninsula in 2014 and its support for separatists in eastern Ukraine.