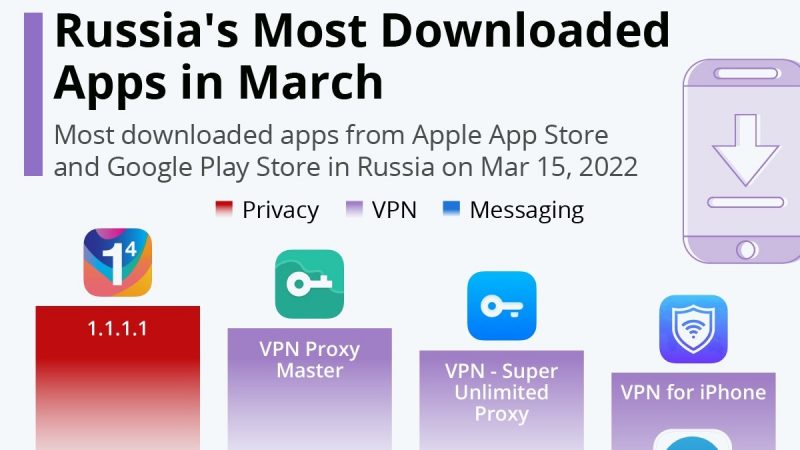 VPN services top the most uploaded apps in Russia [Twitter]

The US government has pushed new, increased funding into three technology companies since the start of the Ukraine conflict to help Russians sidestep censors and access Western media, according to five people familiar with the situation.

The financing effort is focused on three firms that build Virtual Private Networks (VPN) – nthLink, Psiphon and Lantern – and is designed to support a recent surge in their Russian users, the sources said.

Reuters spoke to executives at all three US government-backed VPNs and two officials at a US government-funded nonprofit organization that provided them with financing – the Open Technology Fund (OTF) – who said the anti-censorship apps have seen significant growth in Russia since President Vladimir Putin launched his war in Ukraine on 24 February.

Between 2015 and 2021, the three VPNs received at least $4.8 million in US funding, according to publicly available funding documents reviewed by Reuters. Since February, the total funding allocated to the companies has increased by almost half in order to cope with the rise in demand in Russia, the five people familiar with the matter told Reuters.

The funding flows through the US Agency for Global Media (USAGM) – a federal agency that oversees US government-backed broadcasters, including Voice of America and Radio Free Europe/Radio Liberty – as well as via the Washington-based OTF, which is funded entirely by the US government and overseen by the USAGM.

Laura Cunningham, president of the OTF, said the organization had increased its support to the three VPNs because “the Russian government is attempting to censor what their citizens can see and say online in order to obscure the truth and silence dissent.”

In a statement, USAGM also said it was supporting the development of a range of censorship circumvention tools, including VPNs. It also did not give precise data on their funding.

“With the Kremlin’s escalating crackdown on media freedom, we’ve seen an extraordinary surge in demand for these tools among Russians,” USAGM spokesperson Laurie Moy said.

Russia’s foreign ministry did not respond to an emailed request for comment. In a statement, the Kremlin rejected allegations of online censorship: “We don’t censor the Internet. Russia regulates certain Web resources, like many other countries in the world.”

Martin Zhu, director of engineering at nthLink, said his app’s daily users in Russia had recently soared after it was promoted heavily by US government-funded news websites such as Voice of America: “The graph went from 1,000 one day to 10,000 the next day, to 30,000 the day after that, to 50,000 and straight up.”

Figure of the day: the number of VPN users in Russia increased by 15 times in 3 months https://t.co/zJn6foT9H6

“There are a lot of people in Russia who don’t trust Putin, and government media,” he said.

Zhu, who shared confidential data with Reuters that illustrated this spike in users, said his company would normally struggle to operate inside Russia without financial support from the US government.

Nigel Gibbs, a public affairs officer for VOA, said that it regularly promotes the three VPNs on its network, and had integrated one of them, Psiphon, directly into the VOA smartphone app.

Mike Hull, CEO of Toronto-headquartered Psiphon, said that the recent US government financing had been “instrumental.” He said more than 1.3 million Russians a day were using Psiphon’s network.

At Lantern, an executive at the company, who asked not to be identified for security concerns, said it had added 1.5 million monthly users in Russia since the start of the war, from a previous base of around five million global monthly users, thanks to promotion on US government media and also word of mouth on the messaging app Telegram, which is popular in Russia.

Posters advertising nthLink and other US-government backed VPNs, as well as independent Russian-language media outlets, have appeared in Moscow since the start of the war, according to three people familiar with the matter.

One homemade poster pasted in a Moscow apartment building in the month after the invasion said: “Read about Russia and Ukraine in Russian. Knowing the truth is not a crime!” Below that a QR code links to nthLink, according to a photo of the poster reviewed by Reuters that was corroborated by three separate sources.

Reuters was unable to determine the exact location of the poster nor who hung it. The mayor’s office in Moscow and local police did not immediately respond to a request for comment on the posters.

Opening nthLink in Russia leads users to a series of recent news headlines, including updates about Moscow’s war in Ukraine, from US government-funded news websites.

Long before Moscow launched what it calls a “special military operation” in Ukraine, Russian authorities had been pressuring domestic media they viewed as hostile and foreign-backed by designating some media outlets and journalists as “foreign agents”.

In an escalation of that pressure, Russia’s parliament passed a law in March that allows journalists to be jailed for up to 15 years for spreading intentionally “fake” news about the Russian military.

Moscow also cut access to several foreign media websites, including the BBC and Voice of America, on 4 March for spreading what it alleged was false information about its war in Ukraine. At the time, VOA and BBC both strongly denied the claim.

Since Putin introduced his draconian law that censors social media, I’ve been writing and advocating for 🇺🇸 support for VPN in Russia to bypass 🇷🇺 censorship. God bless America. Next step: provide more info on Tor (many ppl still don’t know about it there)https://t.co/V7SIx0RqQD

As early as 2017, Putin signed a law which prohibited the use of VPNs and in 2019 Russia threatened to completely block access to a string of popular VPNs. Even so, the apps have continued to be quietly used in Russia.

The demand for VPNs in Russia skyrocketed in March when Moscow introduced restrictions on some foreign social media, including Facebook and Instagram.

On the eve of the ban, VPN demand spiked 2,088% higher than the daily average demand in mid-February, data from London-based monitoring firm Top10VPN showed.

“The need to look for a VPN arose with the blocks on Instagram, Facebook, Twitter,” said a resident of Oryol, a city 200 miles (320 km) south of Moscow, who declined to give his full name for fear of retribution.

He said that while he could access social media in Moscow, when he returned to Oryol they were blocked. “Then I came across Psiphon and strangely enough it worked in both Moscow and Oryol: no glitches; always connected.”

Authorities in Moscow and Oryol did not respond to requests for comment.

Though interest in VPNs has recently eased somewhat, daily usage is still up 452% on average compared to the week before war broke out, according to Simon Migliano, Head of Research at Top10VPN.

“We conservatively estimate that at least 6 million VPNs have been installed since the invasion,” Migliano said.

Russia’s population is around 144 million, with an estimated 85% having access to the Internet, according to World Bank data from 2020.

Good time to be a VPN or privacy app in Russia pic.twitter.com/dE2qiowtDM