After the United States on Tuesday (13 October) used strong language slamming Turkey’s renewed push to send a vessel to carry out seismic surveys in the eastern Mediterranean, Germany urged Ankara not to dispel the “climate of trust” needed to de-escalate tensions with Greece.

Ankara on Monday raised tensions with its neighbours after it said it would return the seismic research vessel, Oruç Reis, to the eastern Mediterranean, including off the coast of Greek islands.

The ship triggered diplomatic tensions and rival naval manoeuvres in August when it searched for oil and gas deposits, before Turkey pulled it back to shore last month.

“The United States deplores Turkey’s October 11 announcement of renewed Turkish survey activity in areas over which Greece asserts jurisdiction in the eastern Mediterranean,” State Department spokeswoman Morgan Ortagus said in a statement while urging Ankara to cease its survey activities.

“Coercion, threats, intimidation, and military activity will not resolve tensions in the eastern Mediterranean. We urge Turkey to end this calculated provocation and immediately begin exploratory talks with Greece,” she said.

Tensions in the eastern Mediterranean have risen over claims and counter claims pitting Turkey against Greece and Cyprus to maritime areas thought to be rich in natural gas. Both Turkey and Greece are NATO allies.

The research ship Oruç Reis’ presence “goes against what we (EU countries) agreed on, namely to try all diplomatic means to calm the intensity of tensions in a climate of trust,” Foreign Minster Heiko Maas said after visiting Greek Prime Minister Kyriakos Mitsotakis in Athens.

“We’ve all been very surprised by what we’ve seen from the Turkish side in recent days,” Maas said.

“We had agreed with Turkey to restart exploratory talks,” Mitsotakis said after his meeting with Maas.

“But instead of naming a date” to open negotiations, “we have the Oruç Reis on the Greek continental shelf. We can’t talk under these conditions,” he added.

Speaking earlier Tuesday in Cypriot capital Nicosia, Germany’s Maas said that Turkey should make sure that “the window of dialogue that has just opened with Greece doesn’t close because of unilateral measures.”

The Greece-Turkey dispute will be on the agenda when EU leaders meet at a Brussels summit on Thursday and Friday.

“If Ankara continues its illegal actions, we will use all the instruments at our disposal” to respond, European Commission chief Ursula von der Leyen has said.

Turkish foreign ministry spokesman Hami Aksoy said it was Greece, not Turkey, that was escalating tensions in the Aegean and the Mediterranean Sea.

Last month US Secretary of State Mike Pompeo visited Cyprus and Greece, including the island of Crete in the eastern Mediterranean, as Washington lifted a 33-year arms embargo on Cyprus, deepening its security cooperation with Nicosia. The move prompted an angry response from Turkey at the time. 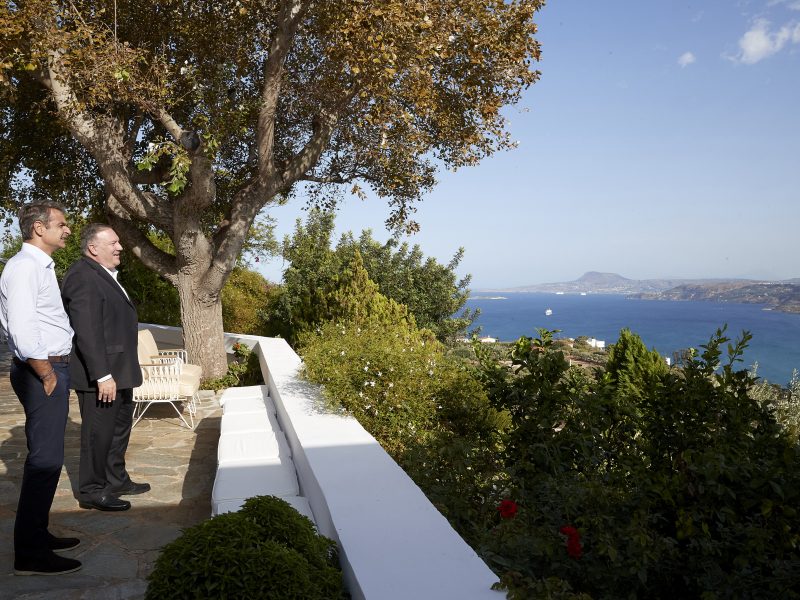 Greece looks for EU support this week in tough upcoming talks with Turkey after securing a diplomatic boost from the visiting US secretary of state.