A growing number of respondents in France, Germany and the USA saw China as the most influential player in global affairs. [EPA-EFE | Sergei Ilnitsky]

The pandemic may be quickly reshaping views of geopolitics, according to new polling data. More people in France, Germany and the US view China as the most influential world power, as US hegemony wanes. However, most also want their countries to take a tougher approach to China on climate change, human rights, and cybersecurity. EURACTIV Germany reports.

In the span of four months, public opinion has quickly shifted in France, Germany, and the US on the topic of geopolitics and particularly the rise of China, a public opinion survey released on Tuesday (30 June) finds. The study was commissioned by the German Marshall Fund (GMF), the Bertelsmann Foundation and the Institut Montaigne.

Conducted both before and during the pandemic, the 2020 edition of the Transatlantic Trends survey shows increasing segments of the US, French and German populations are starting to view China as the most influential actor in global affairs.

In an interview with AFP, Deputy Director of GMF’s Paris office, Martin Quencez, claimed that the pandemic made China’s power more tangible. “Chinese influence in the world was kind of an abstract idea before the crisis. […] When you think about the dependency on China for masks and medical equipment, for instance, this has become very concrete,” he explained. 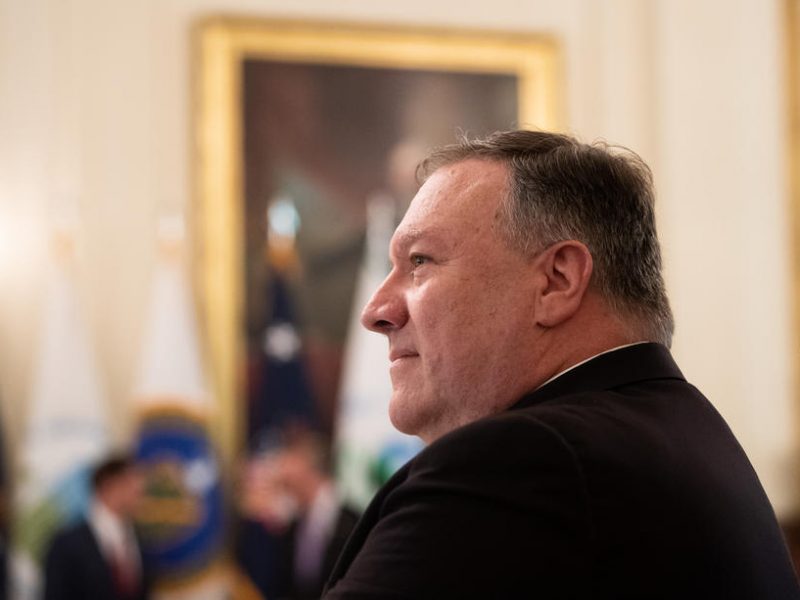 US and EU must face down China together, Pompeo says

The US and EU need a shared understanding of China to resist it, Secretary of State Mike Pompeo said on Thursday (25 June), calling Beijing a threat and accusing it of stealing European know-how to develop its economy.

The US suffered the largest losses in these perceptions of influence. While majorities in all three countries still view the country as the most influential, it lost ground with 12% of respondents in France, 8% in Germany, and 9% in the US.

The declining views of the US influence are likely part and parcel of worsening opinions towards the country, which have been documented in a series of public opinion polls since the onset of the coronavirus in Europe and the US this spring.

In May, the Körber Foundation and Pew Research reported that 73% of Germans polled said that the pandemic had worsened their view of the US. Last week, a poll released by the European Council on Foreign Relations (ECFR) saw a similar trend. In addition to Germany, majorities of respondents in Denmark, France, Portugal, Spain and Sweden said that their views of the US had declined.

Some have pointed to the Trump administration’s handling of the virus. The authors of the ECFR study claimed “Many [Europeans] have been appalled by the country’s chaotic response to COVID-19.”

The recent upsurge in US cases has likely made this perception worse, particularly in relation to the downward slope in Europe. In response to a story by the Washington Post, German Social Democrat MP Karl Lauterbach recently tweeted the “USA seems to have given up against the coronavirus. The consequences will be borne by the poor and the minorities. Unfortunately, many more will die as a result.”

Getting tough on China

While respondents viewed China as increasingly influential, majorities in all three countries polled advocated for a tougher approach towards the country on key issues, particularly French respondents. US respondents were the least supportive, which the report posits “might be because Washington has already confronted China more than its European allies, especially in the areas of trade and security.”

For the Germans and French, climate change was a major concern, both in general and in their relationship with China. 60% in France and 57% in Germany say that their countries should take a stricter stance towards China on the issue. For Americans, the number was at 39%.

While the Trump administration has been confrontational with China on a variety of topics ranging from trade to 5G technologies, Europeans may be slowly striking a stronger tone as well.

On Monday (29 June), German Foreign Minister Heiko Maas (SPD) declared that it is “indispensable for Europe to speak with a single voice to China,” particularly given the “need to investigate the pandemic and the increasingly robust action taken by China in Hong Kong and its neighbourhood.” This will be a key priority for the German EU Council Presidency beginning on Wednesday (1 July).

However, concrete progress in the relationship could be slow, as last week’s virtual EU-China Summit ended without forward movement on a host of issues.