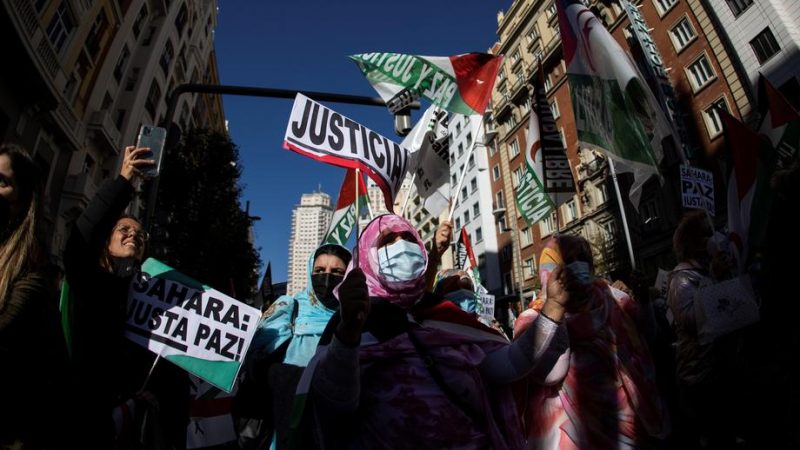 The official added that the US is “fully engaged diplomatically, in support of the UN and together with our international partners, to reinforce a credible, UN-led, political process leading to an enduring and dignified resolution”. [EPA-EFE/Giannis Triantafyllidis]

Morocco is seeking backing for a proposal it tabled in 2007 that would offer limited autonomy via a devolved government in Western Sahara, with tax raising and budgetary powers, though with foreign relations, security and defence remaining in the hands of Rabat.

The proposal has been rejected by the Sahrawi independence movement, the Polisario Front, which demands full independence from Morocco.

In late 2020, US President Donald Trump’s administration recognised Moroccan sovereignty over Western Sahara in return for the kingdom officially recognising Israel. That position was confirmed by Trump’s successor, Joe Biden, specifically by US Deputy Secretary of State Wendy Sherman, during a five-day visit to Morocco and Algeria in March this year.

However, Washington has now qualified that position.

“We continue to view Morocco’s Autonomy Plan as serious, credible, and realistic, and one potential approach to meet the aspirations of the people of Western Sahara,” a source from the US Embassy to Madrid told EURACTIV.

The official added that the US is “fully engaged diplomatically, in support of the UN and together with our international partners, to reinforce a credible, UN-led, political process leading to an enduring and dignified resolution”.

In parallel, Rabat has been assiduously lobbying neighbouring European countries, and with some success.

It was a “small part of a bigger deal with Morocco” that includes an agreement on migration and Spanish enclaves of Ceuta and Melilla management, Isaías Barrenada Bajo, professor of international relations at Universidad Complutense in Madrid told EURACTIV.

Spain’s move came after relations with Morocco hit a new low in May 2021, when Spain gave access for hospital treatment to the leader of the Polisario Front Brahim Ghali, initially denying the fact to Morocco.

Morocco reacted with retaliation, opening its borders to the island of Ceuta, where roughly 10,000 migrants arrived in the island in a few days.

According to Bajo, Spain needs to control its border and rely on a neighbour that “used migrants as a weapon”.

“The second issue is an old one between Spain and Morocco, related to the two small Spanish territorial enclaves in the North of Morocco of Ceuta and Melilla” he added. Both territories are geographically sensitive and “an important source of economic activity in the region”.

Bajo believes these two points are part of the reason for Sanchez’s move. However, he remarked that the 18 March letter’s content was “not totally new”.

“I don’t think it has been exactly a change of position, but rather the official declaration that Spain supports the Moroccan initiative. Since 2007, the Spanish government [was] discretely supporting the proposal. But now it has been made explicit.”

“For Morocco, of course, it’s a very important issue. But for Spain, the two previous issues are more important than [Western Sahara’s dispute]”.

Morocco is also important for Spain “in terms of economic and anti-terrorism cooperation” Aldo Liga, a research fellow for the MENA centre at the Italian Institute for International politics studies (ISPI), told EURACTIV. The Moroccan authorities, he added, are proud of their anti-terrorism policies which Rabat uses as “additional leverage towards the EU”.

A letter with “astonishing mistakes”

Explaining the Spanish position on Western Sahara, Bajo said there are “two sources of information”. “The first one was the press [release] of the Royal cabinet of Morocco, which for the first time talked about a return to normality” with Spain.

“The other source, the Spanish letter, is very strange. Because you can find a lot of mistakes. It is not an official letter”.

Bajo referred to content and form, rather than to spelling mistakes.

After the letter, Sanchez visited Morocco and the kingdom reconfirmed commitments to control its borders and refrain from laying claims to Ceuta and Melilla.

For these reasons, Bajo believes that what is happening “is a break of international law, because it is not the conventional way to resolve a decolonisation problem”.

Bajo describes the Moroccan proposal itself as “an ultimatum” rather than “the result of a negotiation”, adding that “Spain is politically supporting a proposal of one side, and I think it has closed its capacity to mediate. [It] has gone from being part of the solution to being part of the problem”.

Socialist EU lawmaker Juan Fernando López Aguilar told EURACTIV that “Prime Minister Sanchez’s letter to the King of Morocco [stated] that the Moroccan offer is serious and credible. But it does not mean that Spain has acknowledged Moroccan sovereignty on the land”.

López Aguilar said that Sanchez’s position means that the “principle of a mutually accepted settlement between two parties” is still in place and that Spain has not ignored the claims for independence made by Saharawi representatives.

According to Aguilar, Morocco’s plan could lead to a “lasting and solid settlement and a peaceful arrangement of this situation”.

After 50 years, the MEP thinks that a significant move to solve the dispute was needed and argued that the main meaning of Sanchez’s letter was “to relaunch bilateral communication with the Kingdom of Morocco” on good terms.

Meanwhile, the EU High Representative on Foreign Affairs, former Spanish diplomat Josep Borrell, said on 21 March that Sanchez’s letter does not clash with the EU’s position on Western Sahara.

“The solution must come from an agreement between the parties within the framework of the UN resolution. This is the European position, and from what I have read in the letter sent by Spain, it does not contradict it,” he said.

The publication of the Sanchez letter provoked an increase of tensions in the region.

Algeria, which supports the pro-independence Polisario Front, recalled its ambassador from Madrid in protest, 24 hours after the letter was published. Polisario eventually suspended diplomatic contacts with Spain on 10 April.

“It is a unilateral decision that is not in accordance with international law and breaks with the consensus of Spanish foreign policy over the last 46 years,” Abdulah Arabi, the head of the Polisario Front delegation to Madrid, told EURACTIV.

“It is very serious that a country such as Spain, the de jure administering power of Western Sahara, is leaning towards an aggressor and invading party such as Morocco and places Spain on the margins of international legality, which in this way excludes itself from any possibility of playing a role that could help the UN Special Envoy for Western Sahara and, what is more, conditions its work by backing Morocco against the UN resolutions,” Arabi said.

He described the letter as “the result of permanent and constant pressure from Morocco, mainly through migratory flows” coming “at a very turbulent time in the region”. Algeria and Morocco relations have further deteriorated while “there is an open war in Western Sahara ”.

Lopez Aguilar, meanwhile, believes that it was a response to “hybrid pressure [that] has been put on Spain as an extension of the whole of Europe, not only from Morocco, but also from Algeria, and Libya”.

“They, of course, are playing geopolitics, putting a lot of pressure. Algeria happens to be the number one gas provider for Spain and Italy. So [it] has seized the opportunity to increase the pressure [Algeria] might have”.

Miguel Urbán Crespo, an MEP for the Anticapitalistas party, told EURACTIV there has been no real change in the Spanish government’s foreign policy. “What now happened is that the permanent hypocrisy finally ended: the Spanish government now puts in writing what it does and always has done in practice with Western Sahara”.

“Once again, Sanchez has given priority to border control and the strengthening of the autocratic Moroccan regime rather than to international law or the Sahrawi people,” he added.

The Spanish move, Crespo explained, could not have occurred “without first securing an alternative to Algerian gas”, as the move to re-establish good relations with Morocco, in turn, weakens ties between Spain and Algeria.