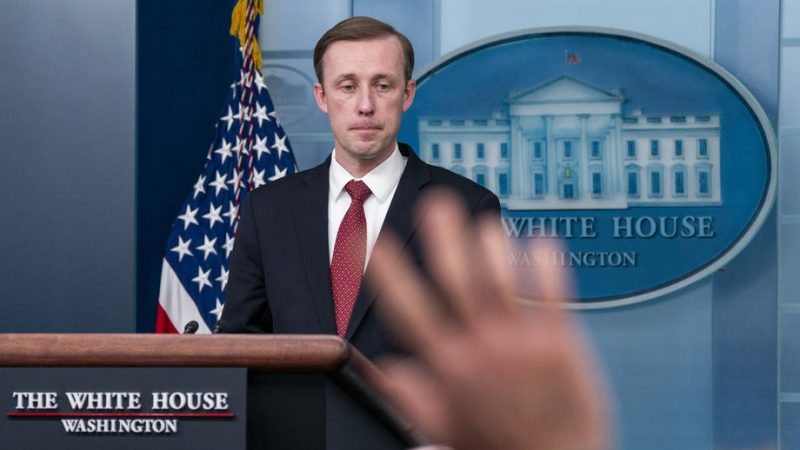 National Security Advisor Jake Sullivan Sullivan on 13 February 2022 issued a grim assessment that an invasion that could begin begin "any day now" would likely start with "a significant barrage of missiles and bomb attacks". [EPA-EFE/SHAWN THEW / POOL]

Washington reaffirmed its warning Sunday (13 February) that Russia could invade Ukraine at any moment and German Chancellor Olaf Scholz prepared to visit both countries in a bid to head off a crisis that Berlin said had reached a “critical” point.

Kyiv also scrambled to keep its airspace open after KLM became the first major airline to suspend its operation because of the threats posed by Russian troops conducting military drills across Ukraine’s frontiers.

Western countries are winding down their diplomatic missions and urging their citizens to leave immediately after a frantic week of diplomacy failed to calm one of the most explosive standoffs since the Cold War.

The White House said there had been no breakthrough during Saturday’s talks with the Kremlin chief.

It said Biden and Zelensky “agreed on the importance of continuing to pursue diplomacy and deterrence” in their call.

US national security advisor Jake Sullivan issued a grim assessment that an invasion that could begin begin “any day now” would likely start with “a significant barrage of missiles and bomb attacks”.

Western leaders are pushing back against Putin’s demands that the US-led NATO alliance withdraw from eastern Europe and never expand into Ukraine.

But Putin is dismissing calls by Biden and others to pull back Russian forces from Ukraine’s frontiers.

Washington has warned that the Russian deployments — estimated at 130,000 soldiers backed by various missiles and tanks — was sufficient to launch a major attack “any day”.

Germany’s Scholz said on the eve of his crunch trip to Kyiv Monday and Moscow Tuesday that Western allies would “immediately” sanction Russia if it invades.

“In the event of a military aggression against Ukraine that threatens its territorial integrity and sovereignty, that will lead to tough sanctions that we have carefully prepared,” he said.

The Dutch carrier KLM on Saturday became the first major airline to indefinitely suspend flights to the former Soviet republic because of the rising risks.

Ukraine’s budget airline SkyUp said on Sunday that its flight from Portugal to Kyiv was forced to land in Moldova because the plane’s Irish leasing company had revoked permission for it to cross into Ukraine.

SkyUP added that European leasing companies were demanding that Ukrainian airlines return their planes to EU airspace within 48 hours.

Ukraine’s infrastructure ministry responded by holding an emergency meeting aimed at maintaining foreign travel and keeping the country from becoming more isolated in the heat of the crisis.

“The airspace over Ukraine remains open and the state is working on preempting risks for airlines,” the ministry said after the meeting.

Industry analysts believe other international airlines may soon also ban flights into Ukraine because of the growing cost to insurers.

The travel industry is still haunted by the memory of Malaysia Airlines flight MH17 being shot down while flying near eastern Ukraine’s conflict zone in July 2014.

All 298 passengers aboard the Amsterdam-Kuala Lumpur flight died.

Ukraine’s infrastructure ministry acknowledged that “some carriers are facing difficulties linked to fluctuations on the insurance market”.

“The state is prepared to support airlines and provide them with additional financial guarantees in order to support the market,” it said.

The worries about air travel come with a growing number of Western governments winding down their missions and advising citizens to get out.

The US State Department on Saturday ordered all non-emergency embassy staff out of Ukraine.

Russia cited fears of “possible provocations from the Kyiv regime” as it also began pulling out some embassy staff.

“I am leaving because of the situation, because I value my life,” Moroccan native Aimrane Bouziane said before boarding his flight home.

“I think the soundest choice to make is to leave Ukraine now,” the 23-year-old entrepreneur said.

The diplomatic drawdown has touched the staff of the Organization for Security and Co-operation (OSCE) monitoring mission in Ukraine.

The OSCE has served as the world’s eyes and ears for the eight-year conflict across Ukraine’s Russian-backed separatist east that has claimed more than 14,000 lives.

But images on social media showed convoys of its white SUVs leaving various parts of the conflict zone as staff moved to comply with their respective governments’ travel advisories.

The OSCE said that “certain participating states” had asked their members of the monitoring missions to “leave Ukraine within the next days”.

But is stressed that its mission continued “in 10 cities throughout Ukraine”.

The Ukrainian government has been trying to preempt the flood of foreigners leaving the country by calling for calm and criticising US warnings of possibly imminent war.

Ukrainian President Volodymyr Zelensky said on Saturday that “all this information is only provoking panic and not helping us”.