US, Russia set firm lines ahead of Ukraine, security talks 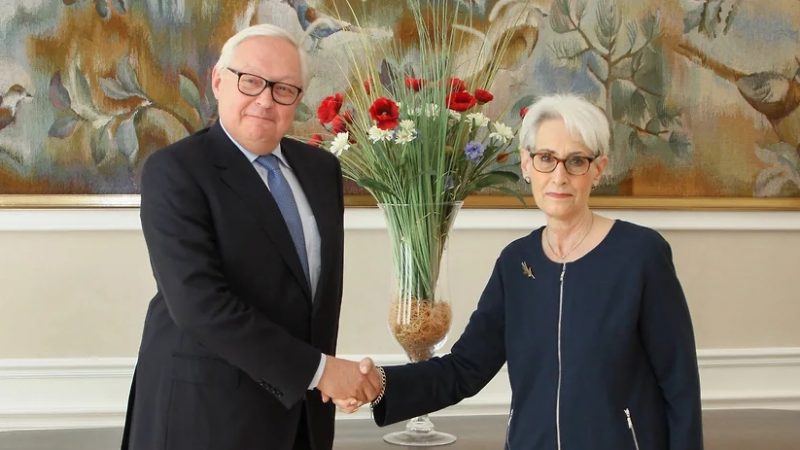 Ahead of the formal talks, US Deputy Secretary of State Wendy Sherman met with Russian deputy foreign minister Sergei Ryabkov on 9 January in Geneva and told him Washington "would welcome genuine progress through diplomacy" . [Russian Mission in Geneva]

The United States and Russia set out firm lines Sunday (9 January) ahead of talks on Ukraine, with Washington warning of the risk of confrontation and Moscow ruling out concessions.

US Secretary of State Antony Blinken urged Russia to steer away from aggression and choose the diplomatic path as the Kremlin, facing strong pressure to pull back troops from the Ukrainian border, demands wide-ranging new security arrangements with the West.

Russia’s deputy foreign minister Sergei Ryabkov told Russian news agencies ahead of his talks in Geneva that Moscow was “disappointed” with signals coming from Washington and from Brussels, where NATO and the European Union are based.

Ahead of the formal talks, US Deputy Secretary of State Wendy Sherman met with Ryabkov on Sunday in Geneva and told him Washington “would welcome genuine progress through diplomacy,” the State Department said.

Ryabkov Sherman, were to hold a working dinner Sunday in Geneva, with a full day of talks to follow on Monday.

The talks with the United States kick off a week of diplomacy during which Russian officials will meet representatives of NATO and the Organization for Security and Cooperation in Europe (OSCE), as Washington tries to assure European allies they will not be sidelined.

“There’s a path of dialogue and diplomacy to try to resolve some of these differences and avoid a confrontation,” Blinken told CNN television.

“The other path is confrontation and massive consequences for Russia if it renews its aggression on Ukraine. We are about to test the proposition about which path President (Vladimir) Putin is prepared to take.”

Since late last year, Putin has amassed tens of thousands of troops at the Ukrainian border and demanded guarantees that NATO will not expand further eastward.

The Kremlin is insisting NATO must never grant membership to ex-Soviet Ukraine, which is pushing to join.

The United States says many of Moscow’s proposals are non-starters.

Blinken warned that any positive outcome from the talks would rely in part on Russia’s willingness to stand down from its aggressive posture, which he likened to “an atmosphere of escalation with a gun to Ukraine’s head”.

“So if we’re actually going to make progress, we’re going to have to see de-escalation, Russia pulling back from the threat that it currently poses to Ukraine,” US President Joe Biden’s top diplomat said.

Russia could otherwise face severe economic and financial consequences, “as well as NATO almost certainly having to reinforce its position near Russia as well as continuing to provide assistance to Ukraine”, he told ABC television.

Putin met Biden in Geneva in June and agreed on regular “stability” talks between Sherman and Ryabkov. Previous rounds were held in the Swiss city in July and September.

Before departing for Geneva, Ryabkov said: “We will not agree to any concession. That is completely excluded.

“We are disappointed with the signals coming in the last few days from Washington but also from Brussels.”

In two phone calls to Putin, Biden has warned of severe consequences if Russia invades Ukraine.

Measures under consideration include sanctions on Putin’s inner circle, cancelling Russia’s controversial Nord Stream 2 pipeline to Germany or, in the most drastic scenario, severing Russia’s links to the world’s banking system.

Russia insists it was deceived after the Cold War and understood that NATO would not expand eastward.

Instead, the US-led alliance welcomed most of the former Warsaw Pact countries and the three Baltic nations that were under Soviet rule.

Later on Sunday in an interview for Russian news agency TASS in Geneva, Ryabkov accused NATO of trying for decades to “push back” Russia.

“So NATO should pack up and return to the borders of 1997,” Ryabkov said. The NATO enlargement to Eastern Europe took place in successive waves, with Poland, Hungary and the Czech Republic joining in 1999, Bulgaria, Estonia, Latvia, Lithuania, Romania, Slovakia and Slovenia joining in 2004, Albania and Croatia in 2009, Montenegro in 2017 and North Macedonia in 2020. Ukraine won a NATO promise in 2008 that it would be allowed to join one day, but diplomats say there is no question of that happening any time soon.

Russian chief negotiator Sergey Ryabkov says it’s time for NATO “to pack its stuff and go back to pre-1997 borders”.
This is where you we are, dear West. But hey, maybe another reset will help.https://t.co/S22U4Z2tYZ

Russia has put intense pressure on Ukraine since 2014 after a revolution overthrew a government that had sided with the Kremlin against moving closer to Europe.

Russia seized the Crimean peninsula and backs an insurgency in eastern Ukraine in which more than 13,000 people have died.

“It is very likely that we will encounter the reticence of our US and NATO colleagues to really perceive what we need,” Ryabkov said Sunday.

In spite “of the threats that are constantly formulated against us… we will make no concession,” he said, adding it would “amount to acting against the interests of our security”.

#Russia’s military build-up in and around #Ukraine undermines European security. #NATO Foreign Ministers stand united in our approach to Russia. The NATO-Russia Council next week is a positive sign & an opportunity for Moscow to show it is serious about dialogue and diplomacy. pic.twitter.com/qPZXVdpas5

But John Herbst, a former US ambassador to Ukraine, described the Russian troop build-up as a “gigantic bluff” by Putin to seek a negotiated agreement.

“They are trying to see if the Biden administration or Europe will blink,” said Herbst, now at the Atlantic Council think tank.

“As long as the Biden administration remains at least as strong as it is now, it probably is enough to keep Putin from striking large into Ukraine, but I don’t rule out something smaller,” he added.

Matthew Rojansky, director of the Kennan Institute at the Woodrow Wilson International Center for Scholars in Washington, said the Geneva talks were more about preventing the Ukraine crisis from accelerating than reaching a major deal.

Further complicating the picture, Russia sent troops into neighboring Kazakhstan last week after the oil-producing former Soviet republic was hit by a wave of unrest. Russia’s foreign ministry reacted furiously to a jibe by Blinken that “once Russians are in your house, it’s sometimes very difficult to get them to leave.”